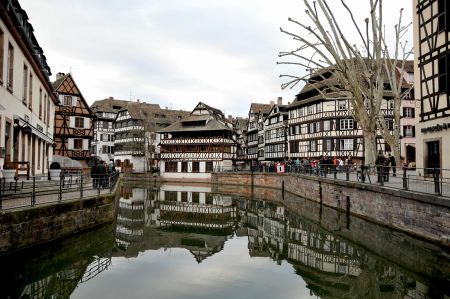 After returning from our extensive first bike tour through Strasbourg, which ended with some shopping, we went along the canals back to Patrick's apartment.

While a hand-raised poulard was being prepared for dinner in the kitchen, which quickly gave off a delicious smell, we were able to check the emails that had come in during the day. Lo and behold, there was also an eagerly awaited message among them. 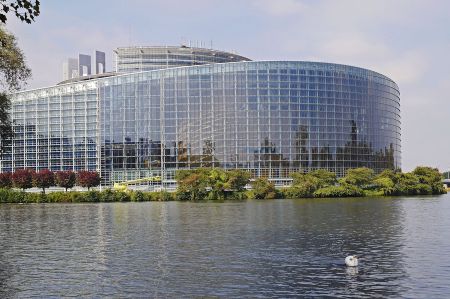 During our conversation in the EU Parliament in Brussels, Ms. Helga Trüpel also suggested a meeting with Ms. Chrysoula Paliadeli in Strasbourg, who would certainly be very interested in our project simply because of her earlier activities as an archaeologist. Since we wanted to spend a few days in Strasbourg anyway, we had hoped for an appointment with Chrysoula Paliadeli. And we were lucky because Ms. Chrysoula was in Strasbourg at the time and was willing to meet with us at short notice. So an appointment for the next morning was pushed in at short notice, which we agreed on by phone.

So after a really delicious dinner with poularde, chanterelles and a few other side dishes, along with an equally tasty red wine, which Patrick explained to us in detail, we were on the road again early the next morning. Patrick had arranged to meet up again with some paragliding colleagues to fly. We rode our bikes to Parliament, which probably didn't seem very busy due to the early hour. We were picked up punctually by Mrs. Chrysoula's employee at the agreed meeting point, checked briefly at the entrance and off we went to Mrs. Chrysoula's office.

We were quickly immersed in an intensive conversation, which was substantiated on the basis of our explanations and with the help of records and plans. People were also noticeably impressed with the preliminary talks that had already been held with various institutions, museums and organizations. So we had the chance to really talk at length about a variety of ideas and possibilities which would also be contacted by Ms. Chrysoula Paliadeli for support. There was an almost cordial farewell, which hopefully also contributed to a planned renewed meeting. We'll see how things develop further. Of course, we will inform you, dear reader, of this in good time. 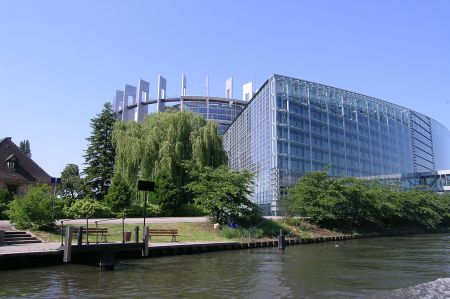 We had already decided the evening before to go back to the old town after the appointment in the EU Parliament to see more sights. Already during the first tour with Patrick, we noticed a large number of buildings that involuntarily reminded us of the German time in Strasbourg during the imperial period. In addition to the train station, the art school and the former school for young girls (Lycée international des Pontonniers), it was above all the former imperial palace (Palais du Rhin), the court and the university with library and observatory that reminded of the German past.

Today we went to another highlight that no Strasbourg traveler will probably miss, the tanners' quarter in the district of La Petite France, which Patrick had already told us about. Here, too, the typical half-timbered houses with, however, very large dormer windows, most of which were without windows. We had learned that many skin tanners went about their business in this quarter and hung up the skins to dry on the upper floors of the roof. It must have smelled terribly at one time, because despite the large dormer windows, the smell often lingered in the narrow streets. Today, the "Quatier des Tanneurs", as the French say, is one of the most important tourist destinations for tour groups from all over the world. We promptly met a group of young Japanese tourists who had gathered on the swing bridge over the Ill for a photo shoot. Shortly thereafter, the whistle of the bridge keeper rang, who had to open the bridge for the passage of a tourist steamer. Only about 100 meters from the swing bridge there is also a lock, which is regularly passed by tourist boats and has thus also become an attraction. A district that alone is worth a visit. 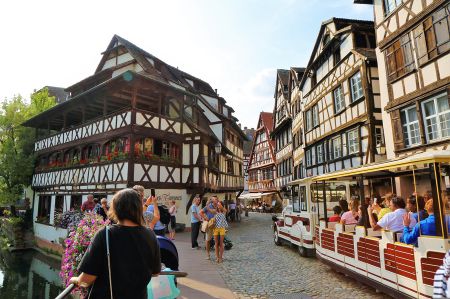 According to a story that still circulates, the name La Petite France is said to derive from a former military hospital that was once on the Illinsel. There were u. a. Treated soldiers who were suffering from the so-called French disease, as syphilis was called pejoratively at the time. How much truth there is in this story, however, remains a secret for Strasbourg.

We decided to go to the Palais Rohan again at short notice to deepen our research into Roman traces, because so far we had hardly found any traces of the Roman presence in Strasbourg in the old town. In the museum, we learned about the archaeological excavations led by Prof. Jean-Jacques Hatt, which he was able to carry out between 1947 and 1953 due to the heavy destruction of Strasbourg during the Second World War. Hatt was able to establish for the first time that the Argentoratum military camp had burned down several times during the first to fifth centuries AD and was then rebuilt.

At first there were only palisade fences and moats in Argentoratum to protect the soldiers camped here, who lived in simple wooden huts. Gradually, due to the fires, the huts were replaced by stone houses. Hatt was able to determine that in the years 70, 97, 235 and 355 large parts of the camp had burned down. After the devastating fire in 97 under Trajan, Argentoratum had the largest expansion and at the same time the strongest fortification of the military camp.

Argentoratum only palisade fences and moats 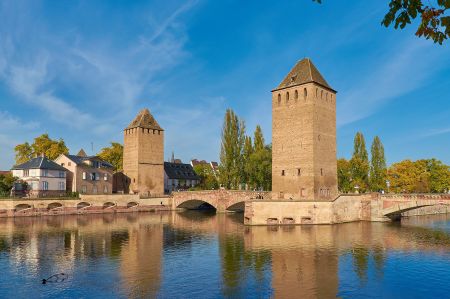 From the 4th century AD, Strasbourg was probably also a bishopric. At least that is what the excavations of the remains of an apse building, which were found in 1956 under today's Eglise Saint-Etienne, prove. This find is very likely to be evidence of the oldest church on Alsatian soil to date and the seat of an original diocese.

In the year 357 the Battle of Argentoratum took place, in which the Alamanni and their followers opposed the prerogatives of the Romans in the region, but without success. It was not until the fifth century that Argentoratum was conquered by the combined forces of Alamanni, Huns and Franks. With the decline of the Roman Empire, the Alamanni pushed west across the Rhine to what later became Alsace. About a hundred years later, the Germanic Franks did the same and conquered large areas of northern Gaul, which they also partially Germanized. A Germanic-Romance language border was already formed at that time along the main Vosges ridge and in a north-westerly direction through Lorraine, Luxembourg and Belgium, which has essentially existed to this day.