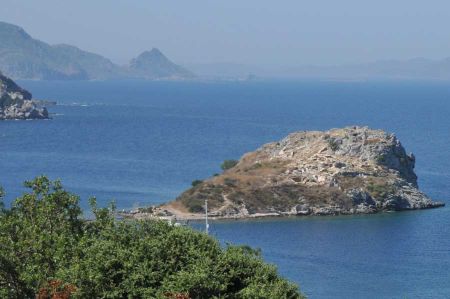 To expand their trading activities, Greek settlers from Miletus moved to many new regions, including the ancient Mysian landscape, which corresponds to the modern Balız near Erdek in the province of Balıkesir.

On their journey along the south coast of the Sea of ​​Marmara, a group of settlers found such ideal conditions on the Arktonnesos peninsula in 756 BC that they decided to stay. They built their city directly on the Isthmos, the narrowest point between the mainland and the peninsula, so that they could use both bays as a harbour.

The increasing trade even with the distant colonies of the Greek settlers quickly led to a certain level of prosperity, so that the city was magnificently expanded. As early as the 5th century BC, Kyzikos had developed into an important city in the Thracian maritime trade, which also extended to Crimea in the Black Sea. Kyzikos minted its own coin in the 6th - 4th century BC, the so-called electron coin, which was an essential currency unit in international trade at that time. Initially under the power of the Persians, Kyzikos was ruled by tyrants, which changed fundamentally when it joined the Attic-Delian Convenant later the 2nd Attic Covenant. In the 4th century BC there were constant conflicts between the city-states Athens and Sparta on the leadership position at sea and on land. A special role was played by the strategic advisor, commander and politician Alkibiades, who first played an interplay of support in his favour for Athens, then for the Spartans and finally for Athens. He recognized the favour of the hour when the Spartan fleet anchored in Kyzikos and was able to completely wipe out this fleet, which was under the leadership of Mindaros, by letting a small part of his Athenian fleet sail along the coast past the port of Kyzikos. what was seen by the Spartans as an opportunity to destroy the Athenian fleet.

As soon as they left the harbour for persecution, Alkibiades sent the far superior second fleet association after the Spartans, whereupon the first part of the Athenian fleet turned and sailed towards the Spartans. So separated from the return to the safe harbour to further associations stationed on land, the only thing left for the Spartans was to flee to the south shore, where Alkibiade's land troops were already waiting for them. The Spartans lost their entire fleet. This naval battle in 410 BC was one of the reasons why Kyzikos was subsequently fortified militarily. 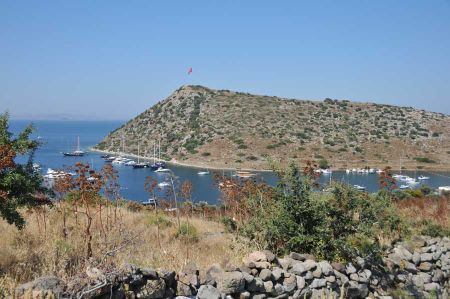 Around 300 years later, the city was besieged by the Pontic King Mithridates VI, who had moved against Rome because of his expansion policy. His siege of Kyzikos in 74 BC remained unsuccessful despite Mithridate's atrocities (he was responsible for the so-called "Vespers of Ephesus", in which around 80,000 Romans and Italians were murdered at a predetermined time), so that the Romans could win back the upper hand.

Like many maritime towns of the time, rule over the city changed frequently. While Kyzikos was initially assigned to the Seleucid Empire, friendly ties were subsequently established with the Attalids. After the loss of their city rights under Augustus, the city of Kyzikos was finally incorporated into the Roman province of Asia under Tiberius. 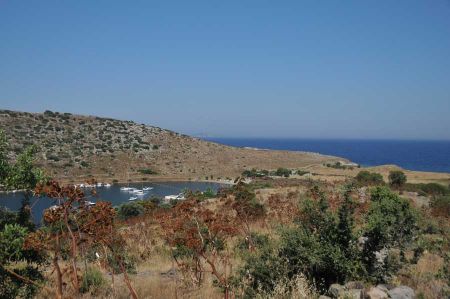 In 670 AD, Kyzikos was conquered by the Arabs, who maintained a naval base here on the way to Istanbul as part of the Islamic expansion. From here the fleet associations started, which were sent to siege Istanbul from 674 to 678.

Already during the times of the emperors Hadrian, Antoninus Pius and Justinian I, violent earthquakes in the region were recorded, which had caused damage to the city. The worst earthquake of 675 then caused such great destruction that reconstruction was initially dispensed with because the residents had more or less given up the city. Under Emperor Justinian II an attempt was made to achieve a Byzantine resettlement of Kyzikos by forcing Cypriots to be resettled in 690. Although the new settlers founded a new city called Nea Justinianopolis, many of them returned to Cyprus after there had been some ship accidents during the journey. Many Cypriots fled to Syria at the time because they did not want to be relocated.

Another major earthquake in 1063 finally put an end to the city, because the destruction was so significant that it could not be rebuilt. The end of a once flourishing trading city had finally come.