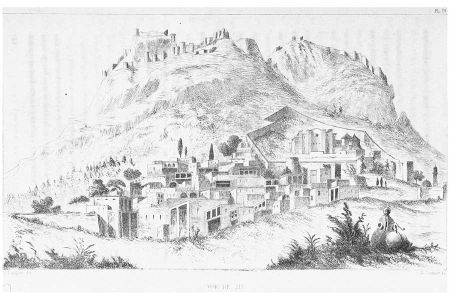 We leave Adana on road 815 in the direction of Kazan, as our acquaintances in Tarsus told us about some historical buildings and interesting castle complexes on site.

It is just 90 kilometres to Kazan on the well-developed country road, which initially leads along the Seyhan Dam via Imaoglu and along the Kirkgen Su, a tributary of the Ceyhan. Kozan is located south of the so-called Anti-Taurus in Çukurova, a very fertile lowland between the Taurus Mountains and the Gulf of Iskenderun, the region that once belonged to ancient Cilicia.

In Assyrian times, the city of Kazan was called Sissu when it was conquered by King Sennacherib's son, Crown Prince Asurhaddon, in 676 BC. The Assyrians were able to successfully defend themselves against the invasion of the nomadic horsemen of the Cimmerians as early as 680 BC. A decisive battle had broken out at Hubusna. As a result, Phrygia was defeated, and Assyrian troops advanced as far as Lydia. In 677 BC, the king of Sidon was defeated and beheaded by the Assyrians because he had rebelled against them. Sidon was completely devastated in this battle, but then rebuilt as the port of Asurhaddon, with the Phoenician population being forcibly resettled to Assyria. As part of the campaign in 676 BC, which was led up into the Taurus Mountains, Sissu was also conquered by the Assyrians. On October 27, 669 BC, King Asurhaddon died of a long-standing illness in Harran.

In the course of the next centuries the name of the city changed to Sision and just reappeared in historiography in connection with the name Gregory the Illuminator, the first Catholicos of Sision, in the year 267 AD. Gregory was brought to Caesarea, today's Kayseri, in Cappadocia by his tutors at a young age, where he was brought up in a Christian way by the priest Phirmilianos. After Trdat III, the son of the former Armenian king Chosrau II at the head of a Roman army, was able to recapture the paternal kingdom of Armenia, Trdat III tortured and condemned Gregory, who refused to sacrifice to the Zoroastrian goddess Anahita. According to the stories of the historian Agathangelos, Gregory was imprisoned in a pit in the monastery of Khor Virap on the Ararat plain. When King Trdat became seriously ill after about 13 years, Gregor was freed from his dungeon and brought to the royal court. Gregory was able to heal King Trdat and even convert him to Christianity, with which all pagan cults were abolished in the empire. This event in 301 established the Armenian Apostolic Church.

In 315, Gregory was consecrated bishop by Leontius of Caesarea and subsequently baptized King Trdat, his family, the Armenian princes, and the dependent kings of Georgia, making Armenia the first Christian state in the world. With these official acts, Gregory was able to consolidate Christianity in Armenia as far as possible, so that he then withdrew to the solitude of a cave on Mount Sebuh in Upper Armenia. Gregory probably died here in 331. His son, Saint Aristakes, became head of the Armenian Church by inheritance, which is why he was also involved in the Council of Nicaea. The Roman influence on Sision increased so much during these years that the name of the city was changed to Flaviopolis. Flaviopolis passed from the Romans to the Byzantines until the city was conquered by the Abbasids in the 9th century, who soon had the city fortifications built under the caliph al-Mutawakkil. Remnants of the fortifications and the castle complex are still clearly visible. After a short interim rule by the Byzantines, Flaviopolis came under the rule of the Seljuks.

In 1187 the name changed again, because Flaviopolis became Sis. With the expansion of the Armenian Kingdom of Cilicia, Sis was chosen as the country's new capital and from 1294 even the seat of the Armenian Catholicos was appointed here. An elaborate royal palace and a cathedral were built on one of the fortified terraces below the castle. When Rubenide Leon sought the Armenian royal crown a little later, he needed the support of Rome and so in 1198 a church union with the Roman Catholic Church was carried out. A little later, King Leon I built another church building in which the throne of the kings of Lesser Armenia was kept until the early 20th century.

In the years 1204, 1243, 1251, 1307, 1342, and 1361 the synods of the Armenian Church were held in Sis. The Synod of 1251 was of particular importance because at the instigation of Pope Innocent IV, an envoy from the Pope also took part, who was supposed to convince the Armenians that the Holy Spirit emanated from the Father and the Son ("Filioque"). During the Synod of 1307, changes in the liturgy were passed, which had already been agreed during the union negotiations between the Armenian and Catholic Churches in 1198, but repeatedly led to displeasure in the communities, ultimately even to the murder of a bishop who had filled the altar wine with water for dilution in Year 1310.

The main changes were:

- Adding water to the wine during the holy mass

- Confirmation of the faithful by bishops alone

- Anointing of the sick according to the Roman pattern

The first mosque was built in 1448

In 1375 Sis was conquered by the Mamluks, who in 1448 built a remarkable mosque as a typical example of Mamluk architecture, the Hoskadem Mosque.

When the Eastern Armenian Catholic were re-established in Etschmiadzin in 1441 in competition with the Armenian Catholic of Cilicia, the Armenian Catholic nevertheless remained in Sis. After the end of the First World War the seat was officially relocated to Antelias in Lebanon. As early as the 18th and 19th centuries, new churches and an important monastery were built above the ruins of the royal palace, in which the Catholicos also resided.

With the Armenians exodus in 1915, the church treasure, which consisted of liturgical books, vestments and utensils, was largely saved. However, the cathedrals, churches and monasteries in Sis were almost completely destroyed. Today it is mainly the Hoskadem mosque and the castle complex of Sis that make the place so special.

We have 245 guests and no members online