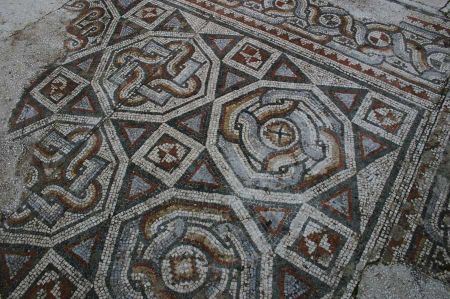 If you drive the road between Karaman and Mut, you should take a short break at the village of Geçimli (Malya) and ask passers-by for directions to the church grotto and the monastery of Alaoda. There was no signage at that time.

About 20 km north of Mut, directly to the west of the road, there is an 8-meter-high, tower-shaped rock in which a small, natural space has been extended by human hands to form a grotto or burial niche. You will be amazed when you enter the grotto, the floor of which is still covered with ancient mosaics depicting a number of Christian motifs. To date there have been only a few studies and it is therefore unclear who and when this grotto was converted into a "church", was it the Byzantines or is the church possibly even older?

The car can be parked at the grotto if you also want to visit the ancient ruins and / or the necropolis of Alaoda, which are about 600 meters across the street. Once it was supposed to have been a monastery building comparable to Alahan. The area is stony but relatively flat and therefore quite easy to walk on. Sturdy shoes are always recommended.
To the northern part of the ancient complex of Alaoda. the easily accessible path begins almost directly at the grotto, which leads down the mountain in a few serpentines. The path gets worse and worse until it is barely noticeable when crossing a dry stream bed. On the way you will find beam holes, which indicate that in ancient times the descent was made easier by climbing, ladders or wooden stairs. The descent is so steep in some places that you have to crawl, climb and slide.
In the southern part of Alaoda there is an extensive necropolis which can only be reached by climbing down the approx. 10 meter high embankment. A little further south, within a small group of trees, there is a small path that makes the descent easier.

From 1953 investigations were carried out and in 1955 Professor Michael Gouche was able to clean some of the mosaics so far that he was able, among other things, to decipher the following inscription, which begins with these words: “Hirsto's mother, the blessed woman was loved by God ... "Unfortunately the other inscriptions are so badly damaged that letters can no longer be deciphered. There is still very little information about the Alaoda monastery complex. It is believed that the Alaoda began around the 3rd or 4th century AD. Dating traces of fire were also found, which can be used to prove that the monastery was built in the 13th century at the latest. was abandoned.

In Alaoda there are currently no guard and there is no entrance fee to pay.

We have 381 guests and no members online