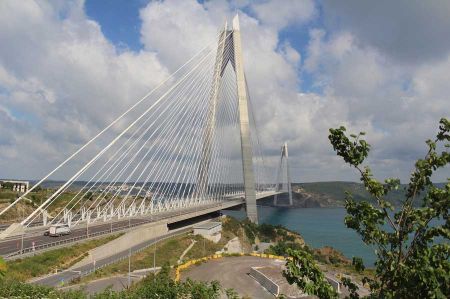 Meanwhile completed - despite multi-layered, long-lasting protests: For several weeks, heavy machinery has been working on the foundations of the new bridge on the Bosporus,

because despite the intermittent protests against the arbitrariness of the government to implement huge construction projects without the consent and questioning of the citizens, the Construction of the third Bosporus Bridge mega-project has started (in between finished).

The estimated cost of the structure is 3.5 billion euros.

So far there are two bridges (Bogazici Köprüsü and the Fatih-Sultan-Mehmet-Köprüsü) that cross the Bosporus between Europe and Asia and that have to cope with the immense volume of traffic in the metropolis of Istanbul. The government says that constant traffic jams cause economic damage of around two billion dollars a year in wasted fuel and missed working hours. Often enough there are congestion and problems - so the need for another bridge is not to be questioned, right? So why protests by citizens and environmentalists against the project? 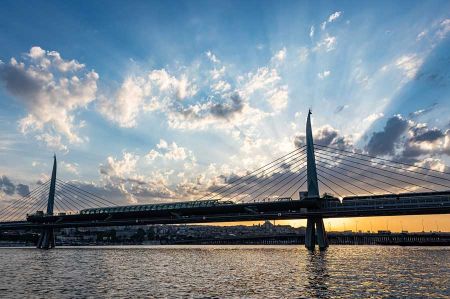 The new suspension bridge will span the strait near the mouth of Bosporus at the Black Sea from Garipce in Europe to Poyrazköy in Asia. In total, the bridge construction will have to be 1275 meters long in order to span the Bosporus. With 322 meters, the bridge piers will be the highest in the world. At a width of 59 meters, which is also record breaking, there should be space for four lanes in each direction as well as two railway tracks. The structure will later be connected to the existing long-distance traffic network for bypassing Istanbul with the new motorway sections of the new motorway ring, which will be 414 kilometres in length, in order to bring heavy transit traffic out of the city in particular and thus relieve the existing bridges. This would also create the longest railway bridge in the world, 1275 meters long from the European to the Asian bank.

The Islamic-conservative AKP government under Recep Tayyip Erdoğan once again carefully selected the date for the official laying of the foundation stone for the third Bosporus Bridge from the country's Ottoman past: exactly 560 years ago, Sultan Mehmet II and his army had conquered Constantinople, which was Byzantine-Christian at the time. In order to establish a connection between the historical event and the laying of the foundation stone of the bridge, a Janissary chapel was ordered to provide background music for the event. The Janissaries were among the Sultan's elite troops in his days. In his laudation during the celebration, Erdoğan said that the conquest of Constantinople had changed the course of history and that a "dark" chapter of history had come to an end. This was followed by the listing of a number of famous buildings of the Ottomans, a rogue who now makes references to the monstrous major projects of the Erdoğan government.

While the television broadcast is ongoing, Erdoğan is negotiating with the two company representatives from the foreign construction companies who are present as to whether the bridge could not be completed 5 months earlier than previously planned. This means that the inauguration date could fall again on May 29, the day of the conquest of Constantinople. So far, the date of the founding of the republic in 2015 was planned as the opening date.

When asked about the planned name for the bridge structure, President Abdullah Gül said: "As you know, the first Bosporus Bridge bears the name of our state founder and first President of the Republic, Kemal Ataturk. The second Bosporus Bridge was named after the conqueror of the city of Istanbul, Sultan Mehmet, baptized. The third bridge will now be called Yavuz Sultan Selim. "

Whether this is a good idea against the background of Ottoman history remains to be checked, because this sultan was once given the nickname "The Cruel", among other things because he had executed his brothers and his nephews. Yavuz Sultan Selim I ruled the Ottoman Empire from 1512 to 1520 and subjugated the entire Arabian Peninsula practically.

Yet a bridge in the figurative sense is always something that connects, why that is not clear to the historically transfigured dramaturgy of the government, will probably remain a secret forever.

In addition to the planned new airport and the canal between the Black Sea and the Sea of ​​Marmara, the third Bosporus Bridge is to be one of Erdoğan's spectacular large-scale structures, probably not entirely without political calculation in view of the upcoming presidential and parliamentary elections in the coming years.

Despite the environmentalists - major projects 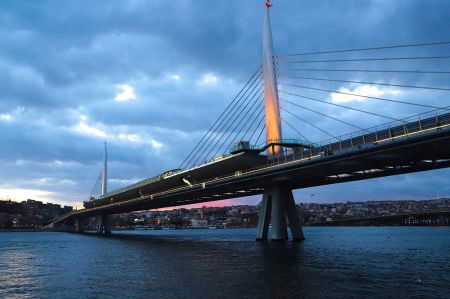 "We will soon see no more trucks in the centre of Istanbul. The heavy vehicles have to cross the third bridge. After the two existing Bosporus bridges, we are giving this magnificent city another, its third pearl necklace," Erdoğan said in an interview.

Environmentalists in particular have considerable doubts about Erdoğan's plans, which is why protests against the construction of the bridge began early on. Extensive forest areas that serve Istanbul's water supply are being cut up, if not destroyed.

"The north is the lungs of the city of Istanbul. This area will now become new building land," says a passerby. "The highways will run through forests and destroy all green there."

After the protests of the environmentalists, a rescheduling had been made and now one wants to build the connecting highways at least partially on stilts and build bridges for animals to cross the routes. However, it remains to be seen whether this will actually be implemented before the events of the last few weeks. The chambers of architects and engineers, who were also significantly involved in the protests in Gezi Park, will in future be excluded from having a say in major public projects. Another question arises from the problem of financing these major projects. Since the Gezi Park protests, however, there have been considerable doubts as to whether the Turkish banks are still ready to provide capital. So far, all major projects have been carried out by the banks; seven Turkish banks alone have so far agreed to finance the Bosporus Bridge. The bridge is being built by a Turkish-Italian consortium that is allowed to earn money with the tolls for the first ten years of operation.

For Erdoğan and his ruling party, the AKP, all objections to the third bridge are just unworldly chatter, just as all demonstrators continue to be insulted because, according to media reports, he has just compared the demonstrators to the anti-government protests with "pathetic rodents". "They tried to gnaw holes in the ship that carries all 76 million Turks," Erdoğan said in Ankara. The Islamic-conservative head of government referred to his allegations that the demonstrators wanted to destroy the Turkish economy.

We have 330 guests and no members online