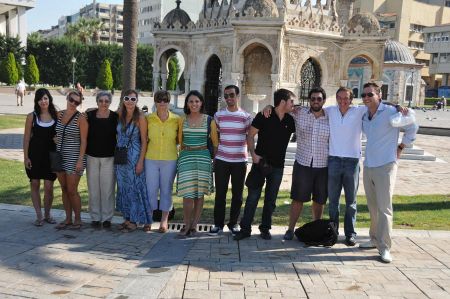 When we were faced with a request to include links in internet pages and following an interesting short article on tourism we have met Themis, a Greek who was fairly critical of his countryman. We have met him at the "Tourism Summer School" Izmir seminar.

Progressive educational seminars for participants from Greece and all other Mediterranean countries are organized at Izmir, Turkey by a Greek organizer. Indeed, this in itself is a good reason to want to meet him.

His aim is to organize progressive education seminars for young university graduates and young employees. He has effectively succeeded in realizing this idea last year. The current seminar is on the tourism branch and covers the promotion and marketing of places owned by small business providers, whether it a hotel that is slightly outside of the mainstream tourism activities, or an under recognized island or an antique settlement. The dates of this one week seminar program are so arranged that the universities are on holidays at the time. As such, those students of related branches are able to attend those seminars organized in cooperation with local university establishments. This time the seminar is organized in cooperation with Dokuz Eylül University.

Themis chose Izmir for the location for this year's seminar for those who are interested in Mediterranean region because, apparently the officials in Izmir provided immense and speedy assistance in terms of the venue and accommodation without any detailed bureaucratic process. As such, a group of 25 made up of students who are "older" or "just entered into work force" are in Izmir for the purpose of papers and discussions regarding marketing and promotion of tourism targets.

A city tour was arranged as the highlight of the organization program and we, the Alaturka.Info team was given the task to guide the group. To that end, we arranged to meet at the Watch Tower, which is the symbol of the city, at 10.00 am. Themis and group arrived from Balçova right on time and subsequent to a short introduction we visited the Küçük Cami ( Little Mosque)., The group had the chance to make contact with the locals in Kemeraltı Çarşısı (Bazaar) and finally we took a rest in the superbly well maintained courtyard of Kızlarağası for some tea. Surely, in the meantime we the guide team had the chance to relay as much information as we could and the group had the chance to learn more about the history of the city. Our next destination was the antique Agora.

Information provided on the urbanization right next to the antique Agora and problems subsequently faced drew much interest from the participants. Because, it is known that similar problems are faced by the countries of some of the participants. "New Settlers" have occupied large sections surrounding the antique Agora and constructed unlicensed buildings. The situation did not attract enough attention for many years. But now, it has become essential that the surrounding buildings are "evacuated". Surely, just as is the case with many other cities in turkey, the Municipal Councils looks to have become aware of the attraction such antique locations draw and their tourist values. As a result, over the years new concepts to stop unlicensed building and relocate the existing population and to stop a new wave of unlicensed building activities were developed.

Generally speaking, Izmir Municipal Council seems to have succeeded in carrying out this project. Unlicensed buildings are vacated one by one. Following evacuation, the buildings are demolished immediately. We saw that the areas surrounding the Agora and the Fortress Hill are slowly being cleared of modern buildings. This of course makes new archaeological excavations to be undertaken possible. As is evident from the initial successful excavations that many important riches are abundant under the ground. A good example is the Roman amphitheatre discovered recently. The participants were full of attention and it was not long before we were bombarded by their questions.

Subsequently, the group was directed to the entrance of the Agora for yet further details and we gathered then to draw sample analyses of a small tourism complex. Indeed, the analyses made could easily be considered to be a small-scale research on "Water transport systems of Romans". This is a catchy subject and thus was the productive discussions we had amongst the group members. We also realized that the participants of the progressive education course had become more detailed in their questions and seeking yet more detailed information. Such were the details that would otherwise be overlooked. Surely, no matter how boring this duty of observation may sound to some, in actual fact they are completely new and unknown to many tourists and will certainly draw their attraction to the area. On the other hand, they are largely "familiar" to the existing knowledge the participants have because, everyone has at least minimal knowledge on the water supply and discharge problems in their own homes. This is a small example of how the Agora tour was observed from a new and different perspective and the resultant understanding of the values of antique structures.

At least we quickly realized the value of such varied opinion by the participants for the students repeatedly pointed out to their "discoveries" and requested further answers. It is fact that details are what makes a "mass" made up of old stones and interesting focal point. And when every tour guide becomes armed with such detailed information and ability to relay the details in a satisfactory manner, the interest in protecting the antique cultural heritage will increase immensely and greater masses of the population will accept the reality that such heritage must be protected. At this point, a striking example we have witnessed many times in the antique Annemurium on Sundays when Turkish families flock to countryside for picnics comes to our minds: Incredibly, barbecue fires were carelessly being lit on 2000 year old Roman mosaics! That sounds unbelievable however, how can those people whose perspectives on history are not "taught to be searching" be blamed?

Our tour ended over a meal at Alsancak. Armed with new knowledge and hope, some of the students opted to spend the rest of the day in the city and some decided to return to their hotels and projects. Themis and we on the other hand, over our delicious Turkish coffees, continued our discussion on other planned organizations whereby joint concepts could be developed. Our interests seem to be exceedingly similar both in terms of organizing cultural events and the timing. We parted to meet at the hotel on Friday morning for the paper submission on internet marketing. The submission was going to be made by Themis personally and subsequently a consultant to Greek Ministry of Culture would cover the legal implications of internet marketing. We had planned to meet Mr. Benturk Dirikal, the principal of Çamlaraltı College the same day and discuss the idea of setting up a summer school. It was not surprising to find out the Mr. Dirikal is a staunch supporter of innovative and progressive education concepts and acquired valuable experience for many years in many different countries. For that reason, it was relatively easier to draw up a framework for various concepts. Surely, further details must be considered and the ideas strengthened and we are dedicated to continue writing on this subject.

A gala night was organized in the evening and each participant was given a participation certificate. A photographic slide show was accompanied by a retrospective opinion giving session on this successful organization. A sumptuous dinner in the courtyard of the Hotel marked the 2nd Izmir Summer Schools Events.