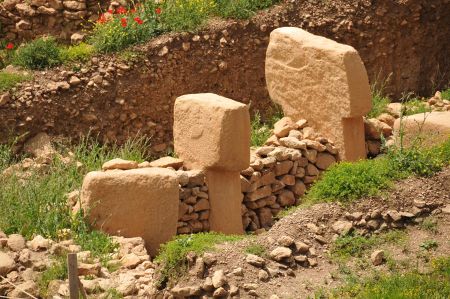 We had designated Göbekli Tepe as the most important destination and the highlight of our Şanlıurfa journey. We had as such communicated with an archaeologist, Mr. Klaus Schmidt for this purpose.

Although the dig calendar was being revised by the Institute of Archaeology as a result of problems between Turkiye and Germany regarding return of archaeological treasures once more, our intention was to meet him, if possible, whilst we are there. That must be the reason we thought, once at Göbekli Tepe, when we did not see any archaeologist at all.

The first archaeologist to start excavations at Göbekli Tepe was an American, Peter Benedict, in 1960. In this context, his prediction was that the subject matter locality was used since the Stone Age. The importance of Göbekli Tepe however was recognized after a visit in 1994 by the German Archaeologist Klaus Schmidt. Schmidt was able to definitely determine that the stone pieces on the surface did indeed belong to Stone Age. It had been discovered that Göbekli Tepe was used for hundreds of years for the purpose of agriculture and the repeatedly found stones were stockpiled by the farmers in clearance piles without knowing their significance, thus the creation of a mound. When larger stones surfaced after rains, they were broken so as to clear land. As such, monumental damage was done. However, looking at the material, archaeologists were quick in deciding that this must be a man made mound.

Likewise, as soon as the excavations began Neolithic finds were made. Within the context of cooperation between German Institute of Archaeology and the Museum of Şanlıurfa, and under the management of Klaus Schmidt, the subsequent excavations in Göbekli Tepe began the same year. They soon discovered the now famous "T" shape pillars. Excavations continued deeper into the stratification layers and the age of this elaborate structure became clearer. The oldest layer discovered up until now and named Stratum III contained monolithic pillars. These pillars were connected by the walls are made of unworked stone, creating connection chambers. In considering the finds until now, two pillars were placed in the center of each circle in this round structure of 10 - 30 meter diameter which is larger in comparison to outer pillars. Looking at the sequential nature of the subterranean layers, it was discovered that Göbekli Tepe was the oldest man made structure yet discovered and was a few thousand years old. Indeed, it was determined concretely that the location was inhabited since Neolithic ages.

Most of the pillars are decorated with carved reliefs of animals and of abstract enigmatic pictograms. The pictograms may represent sacred symbols, as found in caves belonging to Neolithic ages. However, the fact that the carvings are unique, it is rather difficult to classify them. In especially looking at the monobloc "T" shape of the pillars, it can be predicted that those who crated this structure had at that time an amazing building technique. Archaeologist Klaus Schmidt mentions of "representation of mystique creatures" in relation to connection between the carvings and the shape of monoliths. Due to his "point of view" regarding the pillars in the centre, that is the focal point of the round shape structure, Schmidt speculates that the "T" shapes represent human heads- of whom the chins were jutted out. The reliefs on the sides of the pillars tend to support this view. According to Schmidt, some of the T-shaped pillars picture human arms. Except for one sample, it is amazing to see that the reliefs on the pillars include foxes, lions, cattle, wild boars, herons, ducks, scorpions, ants, spiders, many snakes, and a small number of anthropomorphic figures.

From the results of radiocarbon geophysical evaluations it has been predicted that there must be other structures of the same kind. It has been therefore determined that only a mere %2 of the overall area has been excavated. The ages of structures have been determined fairly accurately using the same radiocarbon dating method: Stratum III was ended in about 9000 BC. Stratum II on the other hand was formed in about 8000 BC. "Base Filed" or the floor level was only discovered in one of the structures and surprisingly it consisted of man made Terrazzo floor, just as that of the type used in the later Roman structures.

Our current knowledge determined that in about 9000 BC, the advent of agriculture, seed improvement and animal husbandry brought new realities to human life in the area and human societies-settlements began to flourish. According to latest research, due to genetic changes (lactose intolerance) this is when humans began to consume milk products in their adulthood as well without any complications. This in turn must have made important contributions to urbanization. The period is often referred to as the Neolithic Revolution.

What makes this area astonishing is not only the terrazzo floors discovered in Stratum III but also the 10-20 ton pillars produced in nearby quarries having been carried to the site. Such an effort not only needed a superb organizational capability but also hundreds of men to move the gigantic blocks of stone.

Again, it is surprising that there are no housing discovered up until now, despite detailed searches. From what we can gather, it seems that permanent special structures were constructed only for the purpose of some ritual conventions. Could it have been that the initial settlements consisted of tent like structures?

Another point that is just as astonishing and we do not have any answers to the question of " Why?" is that the people not only stopped maintaining and use of the structures in about 8000 BC but covered all of the structures with sand in a planned manner. A greater effort and about 500 cubic meters of sand were needed to completely bury the structures. That requires some serious labor and it is highly likely that we will never find out the reason why the structures were buried. It may be that due to the animal husbandry and agriculture thriving in the fertile plains of Euphrates and Tigris no such religious sites were needed anymore.

With every question we are faced with and despite the enlightening explanations by the archaeologists (or may be because of the said explanations) we are faced with yet new questions. As such, we find ourselves waiting for the next lot of finds and research. "Potbelly Hill" is the oldest temple structure yet discovered. The first conclusion we reach is that as the humans began permanent settlements, first religious structures were built. Will it be possible to discover more temples that will make it possible to make more certain explanations? The answer remains unknown. Indeed, we have no doubt that the structures found in Göbekli Tepe are well worth visiting. The fact that some of the findings from Göbekli Tepe are protected by Şanlıurfa Museum means that the museum must be a part of your travel itinerary. We hope that the interested parties will agree on continuing the research and excavations on this astonishing site. We were lucky to be shown the plans of the new museum by proud Şanlıurfa Museum officials. Göbekli Tepe is planned to be a center of focus in the main exhibition area of the new museum building.