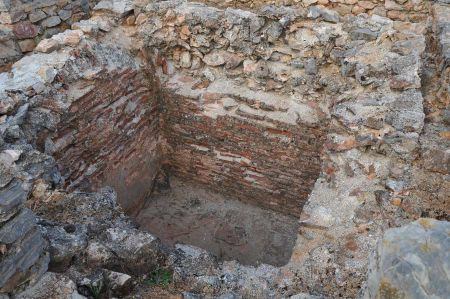 The conclusion to do a trip around Lake Ohrid should include the peninsula and the locality of Lin (in Albanian Lini) . We could have reached Lin from the campsite in Kalishta easily as well by canoe, if it would not have prevent by the country's border with Albania in between.

Lin is consequently on the western shore of Lake Ohrid below the pass Qafë Thana, which connects the city of Elbasan and Përrenjas with Pogradec and Korça at the Lake Ohrid. Just about two kilometers north of the border from Macedonia you will reach Lin, the county seat Pogradec located 22 kilometers more to the south.

We had left Pogradec by driving along the beach area, stopped here and there for some images and were again amazed about the truly excellent water quality of Lake Ohrid. Gritty and sandy, then tightly lined with reeds riparian zones, alternated. From the main road behind Pogradec we initially followed the signs to a camp which seemed to be relatively new. A huge canopy formed as a restaurant and a bar designed the center of the square, to the lakeshore towards thatched umbrellas and graveled beaches which was mostly attended by Albanians. Two years ago, the place had been opened. After a refreshing drink we went on the main road to tap on the Lin peninsula.

The village Lin itself is described quickly, it has a mosque, an Orthodox Christian church and an elementary and middle school. The townscape is dominated by the typical old stone houses in the regional style. In addition to agriculture, fishing and fish farming first, cautious tourism as become a source of income for residents now. In the "new" village of Lin, the stone houses are crowded together along the former settlement mound, which was inhabited as early as the Iron Age, as evidenced by archaeological excavations. The prehistoric and ancient settlements were all located on the hilltop, where also our main interest of visiting was. So we knew that there should be a Byzantine basilica, whose floor mosaics are worth visiting. One should only ask in the village for the mosaics, as we had heard before. There are also the foundations of an early Christian church from the 6th century which were discovered.

By the way, in the village we asked a peasant woman who came back from one of the fields to the village. So we drove through really narrow village streets, last but not least on better dirt roads, but still in the village, to the village hill. Suddenly, from right, three cars with Belgian and Albanian number plates, who all seemed to have the same path like us, appeared. In front of a massive iron gate the trip ended, we were lined up in front of the gate. Of course, we were soon talking to each other: two Belgian families who were on holiday with their relatives and their friends in Albania, including a hotelier from Pogradec, a guide from Elbasan and us. What a happy coincidence, because the guide had already organized the key to the iron gate. So we went into the former settlement area together with a local administrator of the cultural property.

At the time of ancient Lin the area was inhabited by the Illyrians. This was followed by the Romans, until the fall or the transition to the Byzantine Empire. From this time, the ruins of a basilica still exist, whose basement is partially exposed. Their floors still show the original mosaics, which are, however, completely covered with sand to protect against weathering. Only one section can be seen, uncovered with a little effort and considered, but worthwhile in its filigree design from all the directions. Of course, we were quick in the topic of cultural preservation and what the respective state governments contribute to their maintenance. Only slowly peoples mind change to a point, that green tourism can be developed with the preservation of cultural property together, which then can permanently prevent the residents from migration. We want to expand the contact in the coming days, as well for going to other destinations in Albania.

Excavation and Conservation works at Stobi in Macedonia