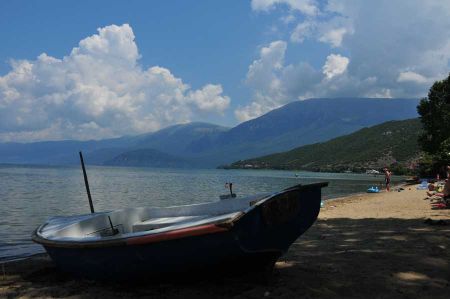 Once again, together with acquaintances, we drove from Camping Rino in Struga to Pogradec, this time we choose the small border crossing at Sveti Naum, as the ride along the Ohrid lake is of great beauty and we wanted to take the high mountain road up into the National Park Galicica again.

Bubbling springs in the lake of Drilon Park 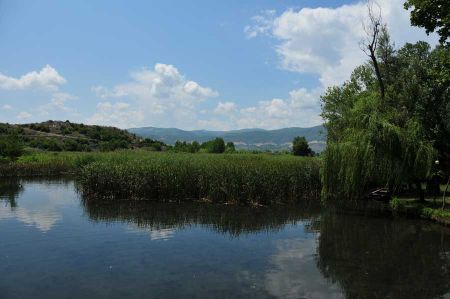 This time, our destination was not the city of Pogradec, just before it wanted to go to parkland Drilon, a relatively small park with some springs near the village of Tushemisht, which even has a Chinese bridge. In the time of the dictator Envar Hoxa and the then significant relations with China, the mentioned bridge was built by Chinese here. Tushemisht was already known in antiquity as a popular seaside resort, once also a favorite destination of King Zogu I and, who else, of the former dictator Enver Hoxha.

Along the sandy beach we reached the access of the park landscape Drilon, which is not only characterized by walking paths under tall trees. So, starting from the bubbling springs, comparable to those of Sveti Naum, there is a small lake landscape, which can be explored with rentable rowboats. Small channels lead through the heavily wooded region, so that many Albanians use the park for leisure activities.

Visitors from many regions praise the idyll 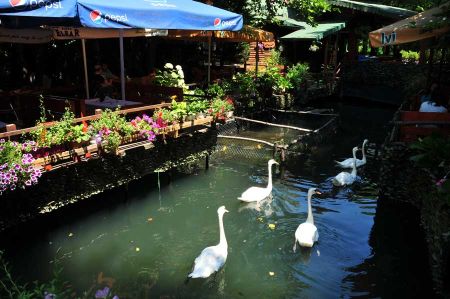 Gorgeous green Everywhere ... such a passerby in German, which we addressed promptly. Very quiet, great for taking pictures, a nice romantic picnic or a long walk, continues the lady who has come by bus to the Ohrid lake.

Although the Drilon Park offers no special highlights, it is due to the coolness of the many waters in the area a popular destination to go for a walk, in addition to the well-tended gardens with the lake and an idyllic cafe on an island to linger. The restaurants also serve famous Lake Konan fish.

Other worthwhile destinations at Pogradec

Those who have some time left over at the Ohrid Lake should visit Pogradec and the small but pretty village of Lin about 20 kilometers to the North of Pogradec. Who cares: there is an excavation of the Byzantine basilica, which also allows a look at the mosaics discovered there. Do not forget to make a detour to Selca, the Illyrian tombs from the 4th century BC about 40 kilometers northwest of Pogradec and the Golik Bridge, one of the Ottomans bridges  built in the 17th century crossing the river Shkumbin. Also interesting is the Guri Kamjes (Stone of Kamja), a free-standing and visible rock in the mountains southwest of the city, which was formed by the wind and erosion.

In short, there is a lot to discover on Lake Ohrid. A recommendation is the circumnavigation of Lake Ohrid by bicycle.