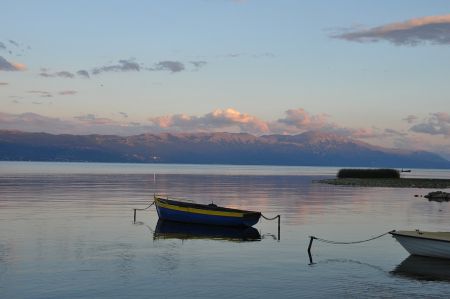 Together with Lake Baikal and Lake Tanganyika, Lake Ohrid is one of the oldest and most fascinating lakes in Albania and Macedonia.

Of the ice ages, which partly covered all of Europe, barely affected, an animal world with endemic species, which had been created to this day, developed uniquely in Lake Ohrid.

Several times we guided our canoe to the Ohrid lake into the reed areas in order to observe water-birds or the water snakes living here. Due to the often gentle wind, the reed steadily moved under slight noise, but it is very difficult to approach the shy waterfowl like Komoran and heron. Ducks are drifting on the lake, and now and then a coot is disappearing in the reed. Also some swans have settled. An idyll that does not exist often in this world anymore.

If you are coming from Albania to Ohrid Lake and Pogradec, the lake is clearly visible from the Quafe Thane pass at 960 meters in its entire extent, the water surface of 350 square kilometers is considerably larger compared to that of the Neusiedler lake in Germany. With a depth of up to 289 meters, the "Liqeni i Ohrit", as the lake is called on the Albanian side, is, however, far ahead in the ranking of European inland waters.

As mentioned above, Ohrid Lake is one of the oldest lakes in the world. The estimates of his age vary between two and five million years. Archaeologists are waiting with much more precise information than the geologists. The peninsula, which now houses the picturesque Albanian village of Lin, has been settled at least since the Iron Age. Among the oldest art-historical testimonies are the floor mosaics of the early Christian basilica from the 6th century.

In contrast to the charming Lin, the town of Pogradec shows hardly any old interesting buildings. A stroll through the markets of the Albanian town, where around 40,000 people live, shows that the Ohrid water in the otherwise dry region allows intensive fruit and vegetable cultivation. Apart from fishing and tourism, agriculture is also the most important source of income for the population. Speaking of tourism, Enver Hoxha used to recover from the "hardships" of his activity as a dictator on the shores of Lake Ohrid, in Tushëmisht on the southern shore of the lake Border to Macedonia. A large number of unsightly concrete bunkers still remind us here today of the politician driven by paranoia.

About two thirds of Lake Ohrid is located in Macedonian territory, with Ohrid serving as a center both economically and as a tourist desrtination. Situated directly on the shore of the lake, the city is one of the most beautiful in the Balkans. It is also home to many sights, including the picturesque Old Town, some early medieval churches, a Roman theater and several mosques and museums.

The most interesting witnesses to the early Christian culture of the region make the path to the banks opposite the city of Ohrid seem worthwhile. Between Struga and Radozda, some tiny churches cling to the steep cliffs. Most impressive: Sveti Atanas near Stenje with frescoes from the late 14th century and a simple carved iconostasis as well as Sveti Arhangel Mihail in Radozda. This more than 700 years old rock church is decorated with frescoes from different periods. The oldest murals, including a portrait of the archangel, date from the 13th century, while younger ones have richly colored frescoes from the 15th and 16th centuries.

Culture makes you hungry and the shores of Lake Ohrid are ideal for a picnic. A small snake can not be disturbed by this and does not swim more than two meters past the pausing traveler. Whether it is an endemic reptile? The reason for the concentration of animals, which are nowhere different, is the fact that the lake was never glaciated and thus pricked without prejudice to the ice age. The Ohrid is therefore also referred to as the "Museum of Living Fossils".

Something curious is the fact that the water is found without any substantial inflow. The lake is fed by springs, with the most important being Sveti Naum. Here, after sunset, the water level begins to color in many reds. Outside on the lake, a single fisherman goes after his craft and fetches nets, hoping that a specimen of the famous Ohrid trout will float in it. The endemic fish species is threatened with extinction, but is still appreciated around the lake as a delicacy and in various restaurants despite the protection of species.