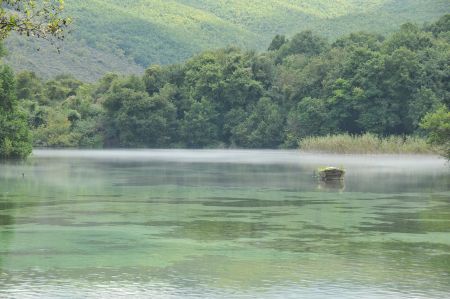 Lake Ohrid is one of the oldest lakes in the world, often referred to be the second oldest lake on the planet. Several times we have already reported about the lake whose water still has the quality of drinkable water and its environment in the Galicica National Park.

The age of the lake is estimated to be 2 to 5 million years by experts, the occurrence of endemic species suggests an evolution in the Pliocene, which means more than 2.6 million years ago. The lake was formed by a moat. The tectonic activities that are still occurring today, probably also cause the existence of a subaquatic mountain about 100 meters high.

The Ohrid Lake, whose catchments area is 1,414 square kilometers, has no significant inflow, which can be easily noticed within the interesting roundabout along the lakeside by bike or by car. The lake is, however, fed by numerous spring streams. The most important source is one at the Sveti Naum Monastery. There, water emerges from the subsoil, which flows underground from the 200 m higher Prespa Lake to Lake Ohrid. However, whether this connection continuously exists or when and for how long it existed, is little researched in geological terms and is therefore not certain. It is possible that this connection is of a temporary nature and is opened and separated by geological processes in the karst rocks of the mountain massif between the two lakes. A natural act in any case.

This magnificent and at the same time interesting destination is best being explored during your stay at Ohrid Lake by rowing boat, which can be hired at Sveti Naum. We were again on the spot and noticed, that, due to the autumn sun, misty veils had developed over the water, which additionally provided for some spectacular moments. For a really small money a rowing boat with charter leader is booked, which is ready for extensive explanations and above all knows the places of the springs exactly. You have to take a close look and avoid any wave-induced movements in the boat to see the small bubbling springs at the bottom of the karst, which have carried fine, white sand from the karst, which as a moving edge easily burrows. No question of visibility, because the water is so clear that one can clearly see every plant on the ground up to 4 meters deep.

Of course, the water is ice cold, so it is not suitable for swimming, which is understandably prohibited in the spring lake too. If you want to try it anyway, it is recommended to swim at the nearby lake shore and swim through the spring stream, which flows into the lake. The difference in temperature can be recognized and seen by the color of the water. Another act of nature.

Particularly at the weekend Sveti Naum with its monastery facilities is also a popular destination for local tourists. So if you prefer something less hustle and bustle, you should preferably come during the week. No question, there are numerous restaurants offering excellent food right next to the springs, in this way there is care for the physical wellness too. If you like it less touristy, the restaurant in the monastery building is recommended, which has an outdoor terrace overlooking the lake. Every now and then one of the passenger ships from Ohrid arrives at the monastery, which is also an alternative option for the journey.

Enjoy your stay and read as well: