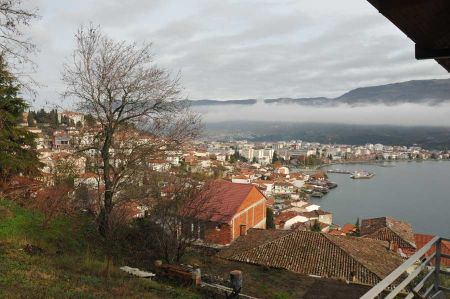 Early in the morning of the following day we had arranged to meet with Perparims father for a trip to the nearby town of Ohrid on the same named lake. We took the advantage of a narrow, winding road along the lakeshore, which led us directly into the city center.

Along the way there were initial information from Rino about the city itself and also of the first, tentative attempts to establish more tourism. Forerunner of the modern town of Ohrid, we quickly learned, was once located on the highest point next to the lake as a mound settlement, which was known as Lychnidos. Northeast to this settlement the fertile plain stretched that had attracted relatively much settlers in ancient times and was probably used for agricultural purposes since the stone age. Even the fish-rich lake and strategic location has certainly contributed significantly to the first settlement of the region.

Scientific excavations revealed the different cultures from the Neolithic to the Iron Age. Dolno Trnovo, located in the City of Ohrid, is a Neolithic excavating place from the 4th-3rd millennium BC. The excavation places Lakočeresko Gradište and Koselsko Gradište belong to the Bronze Age. In Gorenci, some  evidence was found from the Iron Age. On the shore of Lake Ohrid also single pile dwellings were found, which are quite comparable to the reconstructed lake dwellings on Lake Constance. A particular excavation site of this kind can be found in Gradiste dating from the 1st millennium BC.

The first inhabitants of the region, which can be assigned historically relatively safe, were the Illyrian tribes. They lived in the region around Lake Ohrid during the 8th and 7th century BC. The Encheläern and other immigrant communities followed later - exactly when is unknown - which were too kind of Illyrian tribes under whose incursions neighbouring Macedonia in the 5th and 4th centuries BC repeatedly suffered... Philip II. of Macedon wrest the town Lynkestis and thus extended his influence temporarily also up to the shore of Lake Ohrid around 355 BC.

During the Hellenistic period the settlement of Lychnidos developed to a city, in which Greek settlers settled. However, a long time remained in the area around Lychnidos as a controversial region between Illyrians and Macedonians. When Macedonia was "converted" into a Roman colony in 148 BC, Lychnidos came under Roman rule too. The now resultant colony Dassaretia remained until the early imperial period as relatively free commune with Lychnidos as seat of government and as a trade center.

At this time Lychnidos became an important stopover of trading on the Roman Via Egnatia, the trade road  between Byzantium, later Constantinople and the eastern shores of the Adriatic in Durres. We had explored parts of the route  during our journey to Lake Ohrid, because the northern route of the Via Egnatia leading from the Shkumbin Valley, crossing the pass Qafë Thana in today's Albania, then crossed the Black Drin in Struga and went further on to the North-eastern shore of the lake after Lychnidos. From there it continues to Heracleia Lyncestis, today Bitola where it reunited with the southern route, which led past the Lake Prespa.

The flourishing Roman trade was responsible for the rapid expansion of the city: next to the theatre an agora emerged, a gymnasium, a bouleuterion, a basilica and numerous temples, but all founds have been excavated in parts or have not yet been excavated at all. The theatre, which should be the first point of today's driving exploration, is probably the most famous relic of the ancient city. Getting into the theatre area and looking at the age of the city system way, the narrow and sometimes steep streets were never intended for road transport in the modern sense. The theatre was built around the year 200 BC and it is the only Hellenistic theatre in the whole of Macedonia of that time. During the Hellenistic period comedies, tragedies and dramas were performed. With the Romans , gladiator and animal fights were added. In the top three rows of seats, some inscriptions of personal names are attached, which probably served as seat reservations during performances. A total of twelve seats in the public gallery could (lat. Cavea) survived.

Whether the preservation degree of theatre we were astonished that it can still be used  for different events today. However, there are still traces of the former superstructure recognizable, so actually there is a lot of work to do, if you want to get this cultural monument in all its glory. It would be worth it all, furthermore Macedonia, especially Ohrid, is just being discovered as a tourist destination.

During the Roman period Lychnidos grew to the east up till the hill Deboj. In the early Christian era in the city emerged seven churches, which pointed to a religious center in the region. In late antiquity Lychnidos was even a bishopric. With the bishop of Dionysos, Lychnidos is attested as a participant of the Synod of Serdica in 343 AD. He was the only known Metropolitan of the city. In the second half of the 5th century a three-nave church was built, which had received a baptistery and a so called Catechumenum room. The church mainly possessed numerous mosaics from fauna and flora in the Baptistery. On 29 and 30 May 526 AD Lychnidos was heavily damaged by an earthquake. Many residents were killed. The fate of the city is unknown. Since that date, no more records about the city Lychnidos were found. Only three centuries later Lychnidos woke up back to life as Slavic town called Ohrid.

We climbed the former base of the colonization of Lychnidos and were more then just amazed to  find  the huge construction site of a "concrete building" that once will cover a large part of the excavation site. It is a shame how little respect  such a settlement site puts on the long-term appreciation and conservation, which, with good concept involving the Via Egnatia, certainly would allow tourists to use the place more effective than having a whatever building,  could ever be achieve. Clearly, there is a lack on a holistic approach.

In part, larger mosaic surfaces can be visited, but these are also covered provisional. Certainly there is a lack of the necessary resources to implement a clear concept here. So there are columns and arcades, and fountains and newly restored vaulted passages. In short, one strives, but with no real concept involving all possibilities of the region.

A subsequent tour through Ohrid shows the ancient pavement in the narrow streets of the old town. We are surprised when we learned that it has further replacements  in the city center, the massive patch exchanged with concrete slabs. Hopefully at least the old city part with the lovingly decorated houses remain. We too found a small printing  company, where there are printed individual layouts according to the old art of printing pages on self-made paper and after sell it to tourists. Even downtown is very busy in despite of cool November weather. We will come back, because there is still much more to discover.

The awaking cormorant in the morning light at Lake Ohrid