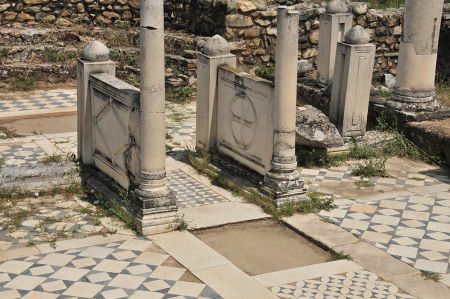 We had to postpone the planned day trip from Ohrid to Bitola several times, now finally it happened. With nearly 75,000 inhabitants Bitola is the second largest city in Macedonia today.

And is the administrative, economic, cultural and political center in the southern part of Macedonia. It was already comparable in the past, because in ancient times, the region was first inhabited by the Illyrians and after its demise as an ethnic group or their expulsion by the Macedonian King Philip II, father of Alexander the Great, who first conquered and then populated the ancient Macedonians into the country. So the real goal of our day's journey to  the modern city of Bitola is going to the ancient ruined city Heracleia Lyncestis, founded 359-356 BC by Philip II.

The original Illyrian settlement Lyncestis was laying on a small hill at the so important east-west connection from Dyrrachium on the Adriatic coast, today Durres in Albania, passing Lychnidos today's Ohrid, passing Bitola going to Edessa and Thessalonica. After the Macedonia and Thrace period, the trading and transport connection between these towns was expanded under the Romans  to important Via Egnatia. Another important side road leading to Stobi. In several campaigns Philip II had tried to expel the Illyrians, because  the environment was suitable and excellent to operate agriculture at Lyncestos. Just because of his modern war machinery Philip II finally succeeded, the area was firmly affixed to Macedonia. The structure of Heracleia Lyncestis strengthened at the same time the position of power of Philips II, which then was expanded by his  son Alexander the Great to a first world empire.

During the Roman conquest, Julius Caesar  put Heracleia Lyncestis  as a supply base for its operating troops  on the Balkans. After the war times, Roman veterans  settled here, so did many locals after serving in the army, because they received land  in return for their services. Although the city, during the Principate, experienced a new heyday as extensive excavations have proven, it is rarely mentioned by ancient authors.

During excavations in the thirties of the last century, then later between 1960-1964 and 1970-1975 parts of the fortified acropolis, the theatre, the baths, two basilicas with late antique mosaics and the remains were uncovered like some private houses. The minor basilica and the associated baptistery were partially restored, like the remains of houses from the Hellenistic period. Most finds from Heracleia Lyncestis now preserved and exhibited in the Museum of Bitola.

Absolutely worth seeing are the large floor mosaics that have been preserved in remarkably good condition. Both in the great basilica and in other buildings, some of the mosaic surfaces are disclosed during the summer months, so the visitors can consider them extensively. In the harsh winter months, all mosaic surfaces are strewn with gravel to prevent weathering. Mostly religious motives, which are also known from other regions of early Christianity, form the enclosure for hunting and animal motifs of incredible splendour and wealth. The faces are amazing because what laborious stone setting work was necessary to create this mosaic diversity.

Little later we noticed a young man who was too much deep impressed about the mosaics, that he even did not realize our hello. But couple of minutes later, when we were looking at some artefacts at Museum between the basilica and the theatre, the young man started a conversation with us. Piotr from Gdańsk, as he introduced himself, he arrived from Greece to the ancient ruined city Heracleia Lyncestis by bicycle. That was the beginning of a pretty intense conversation with mutual understanding, which still should bring a turn in our daily planning later.

Under the reign of Emperor Hadrian, the theatre of Heracleia Lyncestis was built, if there had been a previous building, is still uncertain. The theatre has been modernized with the involvement extant  of ancient parts, so that it can be still used for event purposes. In the 4th and 5th centuries, the city was a bishopric already and numerous names of bishops from Heracleia are narrated, who participated in various councils and synods.

472 Heracleia was sacked by the Ostrogoths under Theodoric. This happened  again in 479 even though the bishop had tried to ransom the city. At the turn of the 5th and 6th century, the city was rebuilt, at the end of the 6th century it was occupied by the Slavs, destroyed and then finally abandoned.

As a further object of the day we had  originally planned going to Sveti Naum on Lake Ohrid, then unfortunately met Piotr in the entrance again, who was talking with his "Guide" and hostel warden. Quickly we were involved and almost as quick the afternoon was rescheduled. Both had to be back in a small Macedonian village called Buchin, about 30 kilometres from Bitola. So we learned Peco,  who invited us to his village. He also reported of an ancient bridge, whose origin is still unknown, our interest was twice awakened. So we took the two a little later towards Buchin, where there was a warm welcome by the parents of Peco.

Of course, we were interested in the bridge, but their origin was unclear for us, some "newer" members were yet been used to build over, so that the development time can be determined only by real experts. Whether here maybe the link road from Heracleia Lyncestis for Stobi ran along and this could be a bridge from the Roman period? In a few days we will meet with some archaeologists in Stobi, maybe there's then new ideas about that bridge.

Later the bridge discussion was followed by another rescheduling because Piotr wanted to leave the next day towards Skopje, which is not without its dangers because he has to go along the main roads by bicycle. Since we also wanted to visit the city soon, Piotr shortly changed his program and drove with  us to the Campsite Rino, so that we could go to Skopje together and put his bike into the car. According to our extensive discussions in English, we made our way back to the campsite very quick, where at a dinner the intensive discussions continued.

Culture Region of Ohrid - the Museum on the Water