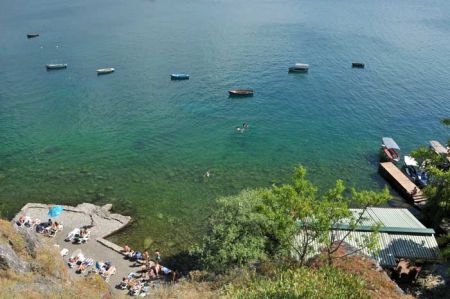 What we really love within Camping, is meeting with people from different countries and learn about their ideas of traveling and outdoor. For sure, sometimes you have to be careful, not to disturb people, but mostly they like exchange too very much.

Quickly some words of hello and how are you, nearly everybody is initially taking it easy going and nearly everybody reacts somewhat uncertain to any newcomer on camping. In most cases, it very quickly turns out that most people are very dear and actually very open minded. You just need to be willing to do the first step of a conversation.

Same happened with Marta and Luis, two backpackers from Almera or Malaga in Spain, which became our neighbors at the campsite of Rino. On one hand, brave and not knowing what the next day will bring, but then focused again and energetically balanced, we learned that both were really kind guys, even they had neither table nor chairs, just two genuine traveling backpackers just carrying the most necessary. In both of them, we learned really open-minded, happy people who were willing to let us take part in their traveling experience at least for a few hours and by that in their lives too. So in the morning we were a bit sad, as already bag and baggage was ready packed and we warmly said goodbye to each other. But then something happened that one rarely find in our yet so fast and technical world: already on the road, opposite of the campsite, the couple turned back to the campsite.

Of course, we were amazed and immediately asked whether there would be problems or some other reason to turn back. This was denied immediately and they explained that they still like going to spend some more time with us and thus wanted to travel further the next day. Of course we were happy, what a question. So we had time enough, we learn each other something closer. For several weeks on the road, they wanted to get to know some of the hitherto but little visited countries in the Balkans, and to report on their own experience at home. Only technical equipment at them to reach their destinations was the smart phone.

Of course we listened to their testimonies with great interest, as well as they showed real interest in our project. No wonder, then, that there were further detailed discussion like the evening before their departure. Quickly it became clear, that they had previously viewed Lake Ohrid only as an intermediate station, without knowing what an interesting "cultural history" with Ohrid and the Via Egnatia was actually to be experienced here.

A little later, the decision was taken already, at least, to use the next morning together for a trip to the city of Ohrid. So all other plans were quickly stopped, we quickly stowed the luggage of Marta and Luis into our car and off we went into the center of Ohrid. Quickly both of them were excited to explore the old town, which we already knew, at least in approach. On the main access road a bakery invited us with their baked goods to procure a little Viaticum, which resulted in really delicious apple pies. Thus not hungry anymore, we set to explore the city.

Of course, at first, went along the harbor, then we followed the coastline between the people enjoying the lovely lake. People were mostly from the countries of the former Yugoslavia, the Lake Ohrid is still well known for many tourists from the Balkans. The clear and clean water of Lake Ohrid contributes to increasing tourism. But perhaps good, because thus Ohrid hopefully remains in its naturalness for a long time. A little later, we took advantage of one of the many restaurant for a Frappe, which here in Macedonia enjoys of great popularity.

Passing the castle we went back to the old town where Luis wanted to buy some souvenirs for friends. A little later, both were engaged in a basketball game with a young resident of Ohrid, so that we could enjoy the sea water. First Marta and Luis wanted to continue their journey away from Ohrid, what later on was to be postponed due to the late hour.

So we went back to the Campsite Rino in the early evening, but again together, where the evening ended with a lovely dinner. The next morning we said good bye to each other, so nice, that we hope to meet together soon again. Who knows, what will happen, maybe we can widen our project to Spain too.

Cutural Region of Ohrid - The Museum on the Water