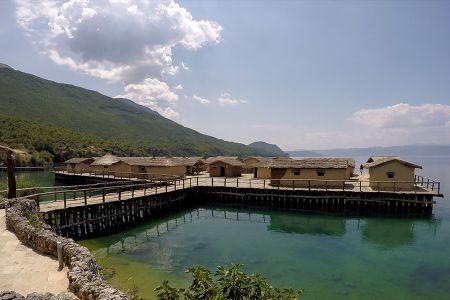 The fish-rich Lake Ohrid and the strategic location attracted the first settlers in the region of Ohrid more than 5000 years ago. The oldest skeletal remains in the city of Ohrid dating from the 4th millennium BC.

So it is not surprising that archaeologist sought extensively for their settlement sites.

In the shallow lakeshore Bay of Bones underwater archaeologists have actually discovered traces of a prehistoric lake dwelling in the form of several thousand pile remains on the lake bed. The traces and artifacts found indicate a settlement around the transition from Bronze Age to Iron Age around 1000 BC. On our trip along the lake towards Albania we visited the "Museum on the Water" in the "Bay of Bones" at the Gradishte peninsula.

The museum on the water is a reconstruction of prehistoric dwellings, which have been built for self-protection reasons on stilts to carry a wooden layer for the huts high above the water. These homes are similar to those of the Bronze and Iron Age (1200 - 700 BC). The archaeologist Pasko Kuzman describes the museum as a major tourist attraction that allows visitors a journey through time, which dates back to the ancient Bronze Age. The museum is unique in the region, it was financed by the Macedonian Ministry of Culture.

Herodotus, the famous Greek historian in the 5th century BC had written about the water settlement at Lake Ohrid:

They (the dwellers), who dwelt about Mount Pagaeum and they likewise who inhabited Lake Prasias, were not conquered by Magabazus. He sought indeed to subdue the dwellers upon the lake, but could not effect his purpose. Their manner of living is the following. Platforms supported upon tall piles stand in the middle of the lake, which are approached from the land by a single narrow bridge.

At the first the piles which bear up the platforms where fixed in their places by the whole body of the citizens, but since that time the custom which had prevailed about fixing them is this: - they are brought from a hill called Orbelus, and every man drives in three for each wife that he marries. Each has his own hut, wherein he dwells, upon one of the platforms, and each has also a trapdoor giving access to the lake beneath and their wont is to tie the baby children by the foot with a string to save them from rolling into the water. They feed their horses and upon their other beasts upon fish, which abound in the lake to such a degree that a man has only to open his trapdoor and to let down a basket by a rope into the water and then to wait for a very short time, when he draws it up full of them. The fish are of two kinds, which they call the Paprax and the Tilon. (Herodotus V. 16)

The village and the entire system, from the entrance to the stilt houses, left ​​a very good, clean impression, you can walk to the latter on the wooden planks above the water from house to house. Some of the houses are equipped with pieces of household, we find plates, enclosures for cattle, etc. The piles on which the platform was built, extend to 5m depth and the water of Lake Ohrid is so incredibly clear that they can be seen from the edge of the platform to the ground everywhere.

Even the small museum next to the stilt houses is worth seeing and shows some of the findings that have been made here during the investigations by underwater archaeologists.

On top of the hill there are ruins of a small Roman Castellum, which are rebuilt. Quickly the reference to our project is connected. Several people had already speculated about the course of the original route of Via Egnatia, which is connecting Elbasan coming up to the Ohrid Lake and continuing to Bitola. It is not clear so far where the course of the Via Egnatia ran along the lake.

Diving paradise next to pile-dwelling museum

There is short video clip available too: