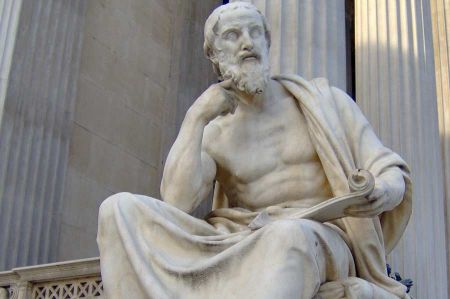 Herodotus was an ancient Greek historian  who lived in the 5th century BC (c. 484 BC – c. 425 BC). He was born in Caria, Halicarnassus ( Modern day Bodrum, Muğla, Türkiye). He is regarded as the "Father of History" in Western culture.

He was the first historian known to collect his materials systematically, test their accuracy to a certain extent and arrange them in a well-constructed and vivid narrative.

He is exclusively known for writing The Histories, a record of his "inquiries" into the origins of the Greco-Persian Wars which occurred in 490 and 480-479 BC—especially since he includes a narrative  account of that period, which would otherwise be poorly documented; and many long digressions concerning the various places and peoples he encountered during wide-ranging travels around the lands of the Mediterranean and Black Sea. Although some of his stories were not completely accurate, he claimed that he was reporting only what had been told to him.

The extent of his own achievement has been debated ever since. His place in history and his significance may be understood according to the traditions within which he worked. His work is the earliest Greek prose to have survived intact. However, Dionysius of Halicarnassus, a literary critic of Augustan Rome, listed seven predecessors of Herodotus, describing their works as simple, unadorned accounts of their own and other cities and people, Greek or foreign, including popular legends, temple and civic records, sometimes melodramatic and naive, often charming - all traits that can be found in the work of Herodotus himself. Hecataeus of Miletus is the best known of his predecessors. Only fragments of his work survive (and the authenticity of these is debatable)  yet they allow us glimpses into the kind of tradition within which Herodotus wrote his own Histories, as for example in the introduction to Hecataeus's work:

Typically modern accounts of his life go something like this:  Herodotus was born at Halicarnassus around 484 BC. There is no reason to disbelieve the Suda's information about his family, that it was influential and that he was the son of Lyxes and Dryo, and the brother of Theodorus, and that he was also related to Panyassis, an epic poet of the time. The town was within the Persian empire at that time and maybe the young Herodotus heard local eye-witness accounts of events within the empire and of Persian preparations for the invasion of Greece, including the movements of the local fleet under the command of Artemisia. Inscriptions recently discovered at Halicarnassus indicate that her grandson Lygdamis negotiated with a local assembly to settle disputes over seized property, which is consistent with a tyrant under pressure, and his name is not mentioned later in the tribute list of the Athenian Delian League, indicating that there might well have been a successful uprising against him sometime before 454 BC. Herodotus reveals affection for the island of Samos (III, 39-60) and this is an indication that he might have lived there in his youth. So it is possible that his family was involved in an uprising against Lygdamis, leading to a period of exile on Samos and followed by some personal hand in the tyrant's eventual fall.

As Herodotus himself reveals, Halicarnassus, though a Dorian city, had ended its close relations with its Dorian neighbours after an unseemly quarrel, and it had helped pioneer Greek trade with Egypt. It was therefore an outward-looking, international-minded port within the Persian empire and the historian's family could well have had contacts in countries under Persian rule, facilitating his travels and his researches. His eye-witness accounts indicate that he travelled in Egypt probably sometime after 454 BC or possibly earlier in association with Athenians, after an Athenian fleet had assisted the uprising against Persian rule in 460-454 BC. He probably travelled to Tyre next and then down the Euphrates  to Babylon. For some reason, probably associated with local politics, he subsequently found himself unpopular in Halicarnassus and, sometime around 447 BC, he migrated to Periclean Athens, a city for whose people and democratic institutions he declares his open admiration and where he came to know not just leading citizens such as the Alcmaeonids, a clan whose history features frequently in his writing, but also the local topography.