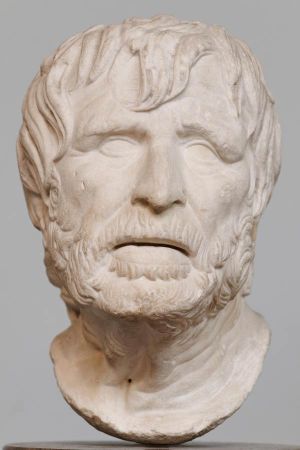 Hesiod (Hesíodos) was a Greek oral poet and is often identified as the first economist. His date is uncertain, but leading scholars favour the eighth century BC for when Hesiod lived.

Since at least Herodotus's time, Hesiod and Homer have generally been considered the earliest Greek poets whose work has survived, and they are often paired.

Scholars disagree about who lived first, and the fourth-century BC sophist Alcidamas' Mouseion even brought them together in an imagined poetic agon, the Contest of Homer and Hesiod. Aristarchus first argued for Homer's priority, a claim that was generally accepted by later antiquity.

Some scholars have doubted whether Hesiod alone conceived and wrote the poems attributed to him. For example, Symonds writes that "the first ten verses of the Works and Days are spurious—borrowed probably from some Orphic hymn to Zeus and recognised as not the work of Hesiod by critics as ancient as Pausanias."

As with Homer, legendary traditions have accumulated around Hesiod. Unlike Homer's case, however, some biographical details have survived: a few details of Hesiod's life come from three references in Works and Days; some further inferences derive from his Theogony. His father came from Cyme in Aeolis, which lay between Ionia and the Troad in North-Western Anatolia, but crossed the sea to settle at a hamlet near Thespiae in Boeotia named Ascra, "a cursed place, cruel in winter, hard in summer, never pleasant". Hesiod's patrimony there, a small piece of ground at the foot of Mount Helicon, occasioned a pair of lawsuits with his brother Perses, who won both under the same judges.

Two different—yet early—traditions record the site of Hesiod's grave. One, as early as Thucydides, reported in Plutarch, the Suda and John Tzetzes, states that the Delphic oracle warned Hesiod that he would die in Nemea, and so he fled to Locris, where he was killed at the local temple to Nemean Zeus, and buried there. This tradition follows a familiar ironic convention: the oracle that predicts accurately after all.

The other tradition, first mentioned in an epigram of Chersios of Orchomenus written in the 7th century BC (within a century or so of Hesiod's death) claims that Hesiod lies buried at Orchomenus, a town in Boeotia. According to Aristotle's Constitution of Orchomenus, when the Thespians ravaged Ascra, the villagers sought refuge at Orchomenus, where, following the advice of an oracle, they collected the ashes of Hesiod and placed them in a place of honour in their agora, beside the tomb of Minyas, their eponymous founder, and in the end came to regard Hesiod too as their "hearth-founder".

"Theogony," a poem which uses the same epic verse-form as the "Works and Days", is also attributed to Hesiod. Despite the different subject matter, most scholars, with some notable exceptions (like Evelyn-White), believe that the two works were written by the same man. As M.L. West writes, "Both bear the marks of a distinct personality: a surly, conservative countryman, given to reflection, no lover of women or life, who felt the gods' presence heavy about him."[16]

The Theogony concerns the origins of the world (cosmogony) and of the gods (theogony), beginning with Gaia, Chaos and Eros, and shows a special interest in genealogy. Embedded in Greek myth, there remain fragments of quite variant tales, hinting at the rich variety of myth that once existed, city by city; but Hesiod's retelling of the old stories became, according to the fifth-century historian Herodotus, the accepted version that linked all Hellenes.

The creation myth in Hesiod has long been held to have Eastern influences, such as the Hittite Song of Kumarbi and the Babylonian Enuma Elis. This cultural crossover would have occurred in the eight and ninth century Greek trading colonies such as Al Mina in North Syria. (For more discussion, read Robin Lane Fox's Travelling Heroes and Walcot's Hesiod and the Near East.)