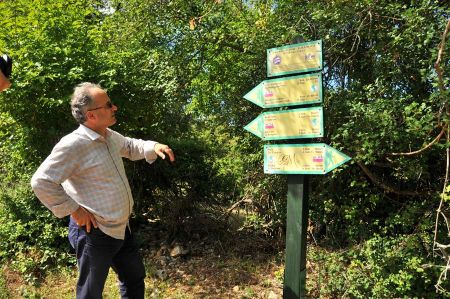 Coming into an area, that "virgin" is a relative good expression for, means a region that still seems to be relatively undeveloped, you are very grateful if you meet someone who has devoted precisely on this problem.

So we were glad when we met with a small office in the old town of Ohrid, which showed an exhibition of photographs of the surrounding area. Only moments later we spoke with the owner, Misho Yuzmeski or Misjo Joezmeski, asking whether there would be questions about the area from our side. We explained our concern and that we are working within a project called 'A journey of Intimacy and Culture along the Roman Roads", and among other things, that within the project we are looking for walking routes to describe by experience in order to support local outdoor tourism.

Accordingly delighted we were when we had found someone who is not only a writer and photographer but also a hiker and thus a person who should be well versed in the area. Misho could speak his mother tongue and English, German, Dutch and even more languages, as we were to learn later during our first introductory hike.

Just behind Ohrid along the shore line of Lake Ohrid begins the National Park Galičica (Galichitsa) which extends to the border with Albania on the one hand and to the shore of the Prespa Lake on the other. The name-giving mountain range Galičica with its highest peak called Magaro (2,254 m) extends over 227 square kilometers between the two lakes. The region appears rich in a variety of plants, some of which are endemic. Botanists counted more than 1,000 species here. The mountain range Galičica also forms a boundary between the occurrence of species that only exist on the bank of the Prespa lake or the shores of Lake Ohrid either way. So far, 11 endemic plants have been found on the slopes of Galičica which are only here on the slopes, nowhere else in the world. Just at the time investigations take place again, which the identification of additional species has as target.

A little later we had made an appointment for the next morning already for a first discovery tour through some mountain villages along the littoral zone of Lake Ohrid. From the city center, it first went  to the village Velestovo which lies at about 1100 meters of height, that is about 300 meters above the Ohrid Lake. We were admittedly surprised when we found detailed sign boards which marked a hike to the next village. So there are actually marked hiking trails in the National Park Galičica what we initially did not expect. We also learned that there are even different routes for hikers and mountain bikers, whatever is, of course an advantage for both outdoor groups. About surrounding diversity of the high forest we certainly don't need much to say, we let the pictures in the Annex speak.

From Gorno Konjsko we set off for Elshani, a very pleasant trail that led us through more pastoral farms with goats and sheep, but also through for the region so typical abandoned mountain villages whose former residents prefer to live in cities or due to lack of work even immigrate to foreign countries. There is very bad feeling coming up to see all the empty houses, the falling homes. First families leave, then more what mostly means brake down of infrastructure, then last people have to leave too. Why not introducing sustainable tourism in these villages? It is not necessary to do huge investments or large effort to implement gentle hiking or mountain biking tourism here. Some marketing by the respective government associated with support for the local population, that's it and some life will flow back into the beautiful mountain villages. Hikers and mountain bikers will also need a place to stay, need breakfast and lunch, best always is next to the route. There are examples enough everywhere. As an example, we can just use the Lycian Way in Turkey, which has been developed thanks to a continuously active Kate Clow as a gentle tourist attraction.

With very positive first impressions we returned to Ohrid, not without fixing a date for another meeting.

The famous Matka - Canyon, Dam and Gorge near Skopje

Roman Scupi - first settlements in the history of Skopje