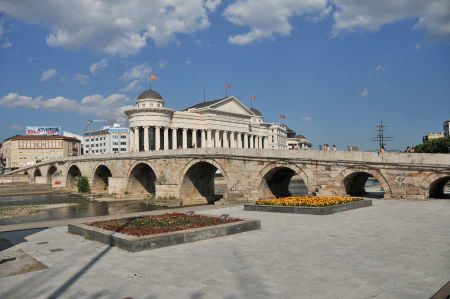 Of course, our first visit to Skopje, the state capital of Macedonia should also serve a little exploring on Roman monuments which were preserved by the yet so varied history.

We knew about a still existing Roman bridge in the city center, the remains of the viaduct to supply the city with fresh water. As well and usual in between, we had a little research into the history of the region and had become aware that first finds of human settlement in the fortress of Skopje are from the Neolithic period; which ethnic group the assigned artifacts belong too, is still unclear.

The first known settlers around Skopje were the Triballi that belonged to the ethnic group of the Thracians. According to them the Paeonians arrived in the 3rd century BC. The Dardani, an Illyrian tribe, could occupy the territory and found a vast kingdom which settlements are mentioned by the Scupi inhabitants in the north to the Albanian Alps. The Dardani declared Scupi as their capital in the 2nd century BC and expanded their empire until Bylazora (at today Veles) in the south.

As part of the Macedonian-Roman war the Romans conquered the kingdom from the Dardani in 168 BC, but for decades they were only able to impose their leadership in Macedonia and Illyria in small steps. As is common in other regions and under different rulers, the Roman Emperor Domitian (81 to 96 AD) moved the legions of veterans like I Italica, III Augusta, IV Macedonica, V Macedonica, V Alaudae, IIII Flavia and VII Claudia into a military camp resembling settlement at Scupi to achieve mixing and enforcement of the population at the beginning of his reign. In other regions, probate applied means to subjugate ethnic groups. Thus developed the place and gained the status of Colonia and was called Colonia Aelia Flavia Scupi in 86 AD.

With the further expansion by the Romans and the introduction of necessary infrastructure, such as the viaduct to supply the city with fresh water, the place started growing. So far, the viaduct is hardly explored, but just visible due to the excellent and lasting architecture by the Romans. The archaeological excavations in the ancient site Scupi began between the two World Wars and were promoted additional in 1925 by revealing an early Christian basilica. Later the excavation took place at the most important building, the Roman theater. The City Museum Skopje started with the restoration of various ruins first time in 1966. 2008 archaeologists found a 1.7-meter-high Venus statue. A total of over 23,000 objects have been found which are on display in the new Museum of the City.For sure, not all parts can be shown to audience.

Among the "excavated" buildings of Scupi including the aqueduct, were some bathhouses and individual townhouses and the theater. With the exception of the theater whichcould not survive to modern times, all the buildings can be visited. The archaeological spot Scupi is about four kilometers northwest of the city center on the other side of the Vardar river, but there are no sign boards, so we could not find the place during our first visit.

Thus, we have initially focused on the ancient bridge in the city center, which leads over the Vardar River and today is a pedestrian bridge in operation. The bridge consists of four large segmental arches that span the watercourse directly as well as two smaller segmented bends that are located on the near shore area, so that it can not harm even a possible flooding of the bridge. On the left side of the river, there is another small segmental arch, and on the castle side of the river two more sheets to achieve the necessary crossing below height. The pillar structure on the riverfront is so greatly enhanced, probably here once stood a gate construction as a bridge guard.

We will certainly try to find the excavation site at our next visit and surely find the appropriate guide also.

Culture region of Ohrid - the Museum on the Water

Back at Lake Ohrid - morning impressions at the lake site