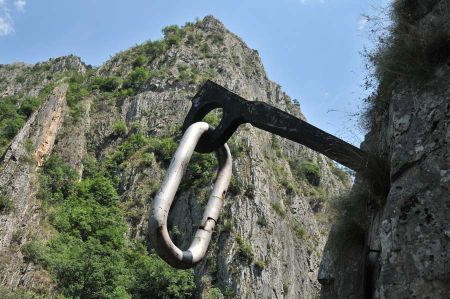 After our mostly disappointing days at Skopje, we were already on the way back to Lake Ohrid when we were discussing to visit Matka Canyon to report about this famous ravine, as we were able to see the sign board in a bend.

Of course we had googled and researched before driving, but yet the way sign was then mounted so close to the exit, that it was barely reachable anymore. In Skopje itself we already had similar experiences in the search for the Roman viaduct, an endeavor that we finally gave up due to lack of signs and local people had no idea. Too bad that there is quite an amount invested for "magnificent" statues in the city centre that almost resemble Disney's fantasy worlds, but no money seems to be available for small traffic sign boards on the other hand.

But finally we reached the Matka Canyon, located to the west of Skopje, after all, the Matka Lake in the Canyon's is the eldest artificial lake in the whole of Macedonia, it has been provided with a barrage designed to hold the water to produce electricity. The proximity to the city of Skopje makes the gorge a popular destination for residents of the city and of course for tourists also, when they are able to find it. In the surrounding mountains of Matka canyon even alpine hikes take place nowadays, the season lasts from Easter until November. The water reservoir itself is being used for kayaking or boating, offered by the hotel.

In and around the Matka gorge there are 10 caves, smallest cave has a length of only 20 meters and the longest cave is as high as 176 meters. The Canyon also features two remarkable vertical holes, each ending in about 35 meters of depth.

The Canyon area is home to several historic churches and monasteries, such as the monastery of St. Andrew in the canyon of Treska river. Built in 1389 by King Vukašin's son Andrijaš, it contains frescoes that have been painted by the Metropolitan Jovan. The Matka Monastery or Monastery of the Holy Mother of God, built in the 14th century, is located on the left bank of the river Treska. According to an inscription in the church a certain person called Milica had found the church in 1947 in a very poor condition and without a roof.

The St. Nicholas Monastery / church situated on a cliff high above the gorge and the monastery of St. Andrew are not very far from the lake too. There seems to be a veritable collection of monasteries in the area of Matka canyon. The date of construction of the church is unknown. The first written mentioning there was in the 17th century during the Ottoman rule. Much of the icons of the church were painted in 1645, while the west side of the church was already provided with frescoes in 1630. The monastery was abandoned in the 18th century. A monk found this church without a roof in 1816 and was trying to revive it. Nevertheless the monastery and church were abandoned again in 1897. The monastery has a unique view from high above the gorge.

After leaving the main road, there is a narrow, winding road up to the dam, where a parking lot is available. From here we walked on a windy but paved way to the hotel which is starting point for hikers as well who want to walk along the lake on a lakeside path, about 6 kilometers deep into the valley or for the more experienced ones then can ascend into the mountains.

After a few kilometers, we had seen enough so we had particularly noticed serious pollution of the natural environment what certainly would be easy to change. Every now and then there was a small plastic bag, which was attached to railings or posts, totally inadequate and often carelessly thrown into the bushes. Here still much educational work is necessary to change this behavior. Well, forty years ago, at many roads of Western Europe it did not look much better.

Culture Region of Ohrid - The Museum on the Water