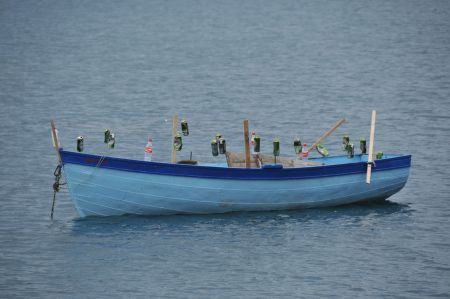 It is quite chilly in the morning and the sky is overcastted with clouds. We want to begin our way to Ohrid, because our friends Julia and Davide, on our advice, only have a few days time for the Campsite Rino next to the lake before following their own schedule and time table to Albania.

For sure, at least we want to show some highlights at Lake Ohrid to them.

Once being parked the car at the center of Ohrid, we first encountered a large street and road map, which we initially wanted to use to explain the planned hike on the tour through Old Town and up to the castle. From the port, the views of the medieval houses downtown initially obtained, and, despite real gray sky, the splendidly buildings in Ottoman style with typical bay windows are absolutely worth seeing.

Next to the harbor we met with the first of the countless churches for what Ohrid is known: Sveti Bogorodica Bolnicka. More churches as days in the year, as the saying goes, there are in Ohrid. Just a year ago, the small chapel has been restored and equipped with the garden, the first highlight on the tour through Ohrid. We then went in direction to Sveti Sofia, the most famous and oldest church in Ohrid, which today is one of the main attractions and is shared as a museum of icons and murals. The architecture of the building clearly shows that the builders have greatly "used" older, predominantly Roman building material in quite huge amounts. In front of the Basilica there is a small stage, which is being used for performances at Sveti Sofia.

Here the pedestrian street leads down to the lake and we follow the wooden bridge that leads along the lakeside as a path to the beach sections with small beach bars and restaurants. However, we also observe a short playing episode and resting of the animals on the way. Various curiosities fall on us, the small but "elaborately" decked rowing boat, as well as the symbol of the toilets, which, almost hidden shows the way to a rock niche.

Then the gentle ascent to the castle hill, the first stop at a terrace gives us the great views of the beach area of Ohrid and later we arrive at the tiny chapel Sveti Jovan Kaneo. This chapel is considered to be a further magnet for tourists, which includes a huge number of church icons, paintings and murals.

We dispense with the visit to the castle, which we had already visited extensively, especially Julia and Davide are more interested in the Roman heritage. After a brief consideration of the city gate and the associated ancient pavement we reach the impressive theater of the Roman period, which is still used for events today. Partly impressive stone carvings from antiquity fascinated in accuracy of joints without any mortar. Right next to it and not unearthed, we noticed some capitals which are laying unprotected in the loose soil of the escarpment. Hard to believe, but ignored for years.

A little below the theater there is another excavation site of a basilica, which has had excellent floor mosaics once. Partly, but only partly covered, by an indeed architecturally interesting but unhelpful construction that was actually built for the protection of the mosaic, so damage to the mosaic can be seen now caused by rain and snow.
We conclude our tour of Ohrid in visiting of the pedestrian zone, which is very crowded, especially during the months of July and August, so that this time of the year should be avoided better for a visit.

Overall, the tour of at least nearly 3.5 hours is a very positive experience as Julia and Davide insured, even during very hazy weather.