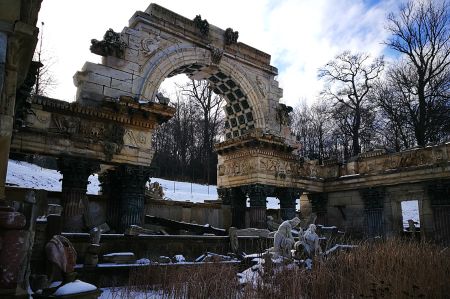 Once again, we were meeting to discuss the setting up of a camper stop and its advantages with regard to the further development of local culture and travel tourism to Brunn am Gebirge, which we could later use to visit the Palace of Schönbrunn and the city of Vienna.

During the first round of discussions, differences between camper stops and campsites were discussed, figures and statistics were analyzed based on the development of campers in Germany and their positive effects on the respective municipalities were highlighted. Many travelers, who use the more than 3,600 camper stops in Germany, have so far sought in Austria, with few local exceptions, in vain for these effective facilities, which can transport tourism and thus develop the local economy so immensely. Especially our findings of the latest figures, which we won during the so-called "Stellplatz Meeting" during the CMT in Stuttgart, clearly confirm the possibilities. The growth in annually newly registered campers is still in the 2-digit percentage range.

At noon, we had arranged a meeting with the architecture student Zeynep from Ankara, who had studied in Vienna for a year abroad and wanted to show us her favorite places in Vienna. The background was in this case also a meeting with Dr. Barbara Mohapp-Holzmeister, the daughter of the well-known architect Clemens Holzmeister, who became known as a migrant architect for many large buildings in Ankara during the 30s of the past century under Ataturk, f.e. Parliament building. We had already reported about this and also presented a book publication by the Goethe Institute Ankara. Even today former students of Clemens Holzmeister teaches at the Academy of Architecture in Ankara, as does a professor as Zeyneps instructor, who is very close to Barbara Mohapp-Holzmeister, which closes the circle.

Our meeting was planned at the subway station Hietzing, from where we first walked through the palace gardens of the Schönbrunn Palace in the 13th district of Vienna towards the city center. The name of the world-famous Schönbrunn Palace dates back to a phrase written to the Emperor Matthias, who in 1619 had "discovered" an artesian well while hunting and called out "Welch 'schöne Brunn". Built as a residence for Empress Eleonora Gonzaga between 1638 and 1643, the plant was heavily damaged in the Second Viennese Turks Campaign in 1683. In 1687, Leopold I ordered a representative new building of Johann Bernhard Fischer von Erlach for his heir to the throne. Schönbrunn is the largest castle and one of Austria's most important and most visited cultural objects. The castle and the 160-hectare park have been part of the UNESCO World Cultural Heritage since 1996.

Our path through the now snow-covered parking area also led us to the so-called Roman ruin, designed by Hohenberg and erected in 1778, and oriented to Piranesis depictions of the ruins of the Roman Vespasian-and-Titus temple. It was at first called the ruin of Carthage. During the restoration, which was completed in 2003, the original coloring was re-applied by means of a contemporary watercolor and the remaining colors on the stones.

The complex consists of a large circular arch and lateral walls, which comprise a rectangular basin, giving the impression of a sinking ancient palace. In the basin, on a man-made island, a figure group of Sterzinger marble, created by Beyer, depicts the river gods of Moldau and Elbe.
The statue of Hercules, who opposes the forces of evil, surpasses the ensemble from half the height of the slope in the background, exactly in the axis of the archway. It was planned to lead water cascades from there, like a flood to destroy Carthage, but this was never implemented: there was a lack of water and money. However, the terraces are still recognizable in the existing grass-covered track.

Artificial ruins, which became very popular in the course of the emerging Romanticism from the middle of the 18th century, symbolize ambiguously the decline of one size as well as the relation to one's own heroic past (by glorifying their alleged remnants). This also explains the reinterpretation of the building, which has been called the Roman ruins only since about 1800, thereby expressing the claim of the Habsburgs to continue this empire. Not far from it, the recently erected Obelisk Fountain complements the iconographic program of the garden design and deepened the same claim.

Another main attraction in the castle park is the palm tree house. It was commissioned by Emperor Franz Joseph I in 1880 by his court architect Franz Xaver Segenschmid to present the extensive collection of Hapsburg plants planted in several glasshouses spread around the place. After just two years of construction, the glass house was opened. In 1883 the first planting was completed. With a total length of 111 m, a width of 28 m and a height of 25 m, the Palmenhaus Schönbrunn is the largest glass house of the European continent and one of the three largest in the world. It houses about 4500 plant species, only a part of which is firmly planted, but a larger part is presented as flowering tub plants depending on the season.
As the sky was slowly changing to blue, we continued our walk through the castle grounds and will continue to report too.

Brunn am Gebirge - a guided tour with Robert