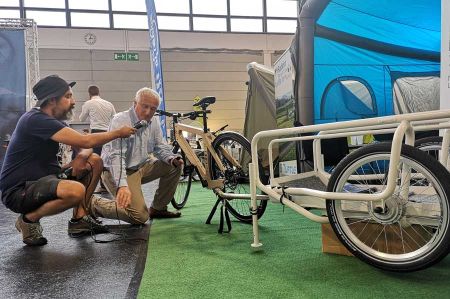 A trade fair visit should always lead to new discoveries in the areas of interest of the respective users, so what does the valued bike fan expect during the EURO Bike in Friedrichshafen?

Of course, news about the topic of cycling, which is also one of our favorite topics. So it was at least one day, which was scheduled for the tour during the probably world's largest fair in cycling.
Of course, there was a lot of news on the stands of the wheel manufacturers, conspicuous the immensely strong widening in the variants in the e-bikes, whose market share increases so noticeably. Also in the accessories on the subject of traveling by bike the same picture, where even recently doubts had emerged regarding the all-encompassing applicability, suddenly there are solution offers – as a sample the BTurtle. 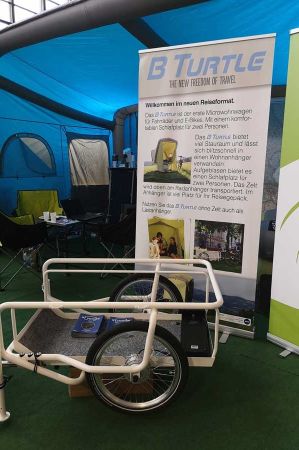 Several times we had reported about the BTurtle, had taken the opportunity to test this practical tent trailer during test operation, with quite different wheels we used. Sometimes with the e-mountain bike, sometimes with the pseudo-solid bike Benno-Bike, then again with an e-touring bike. We have always been impressed by the manageability, the quick set-up, the sleeping, and the confident standing while dressing. Just when we tried to use a conventional touring bike, that is without electric drive, we struggled on the roads. Despite just 29 kilograms dead weight with tent, the own luggage, which had already been minimized, it was quite tiring on slopes, so we would like to have the option to switch to the e-bike.

No wonder, then, that we wanted to throw our eyes at the small detail in the middle of the wheel several times during the current tour on the trade fair - a motorized drive as a wheel axle, plus the changing from the 80 mm axle to 100 mm. A first look at the associated roll-up showed a little more - supplier of the engine with associated electronics, the company electrail.

The electrail system was originally intended as a very versatile, affordable and environmentally friendly solution for motorized load transport. The e-trailer pushes the bike on the pedelec principle: the engine starts when pedaling. 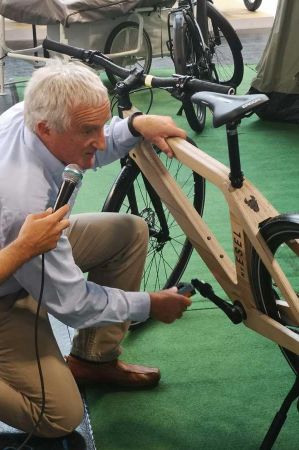 At 25km / h, the engine shuts off. Because the drive is installed in the engine, it is independent of the bike. The pedaling movement is transmitted by radio to the trailer - so no cables must be installed on the bike. This is the reason for that the motorized trailer is not dependent on a specific bike, but can be used with different bicycles.

The pedaling movement is detected by the "pedal radio". It is slightly larger than a USB stick and is attached to the pedal crank with elastic Velcro tape. The signal goes to the receiver, which is housed with the engine control and the battery in the e-box and is fixed to the trailer. From the e-box only a single cable leads to the engine.

The team of GentleTent showed us the electric drive and ... .. it worked perfectly. On a pattern wheel, the signal transmitter element is climbed at the pedal and already with the first pedal rotation the drive of the Bturtle is in motion.

The faster the pedal movement, the faster the trailer moves. The BTurtle in this version can now also be used as a trailer tent or load trailer with bikes without an electric drive.

It's still a prototype - the powered BTurtle

Of course, it is still the prototype, so the question of attaching the battery is still unclear, which will be no problem with the existing girders. Certainly, a pocket solution will be favored and considered, allowing easy access and positioning it securely on the frame. Talks with the trailer manufacturer Alu-Line will be made shortly. The first orders, according to the GentleTent team, are already coming.

We are looking forward to the first reports and evaluations of the users.