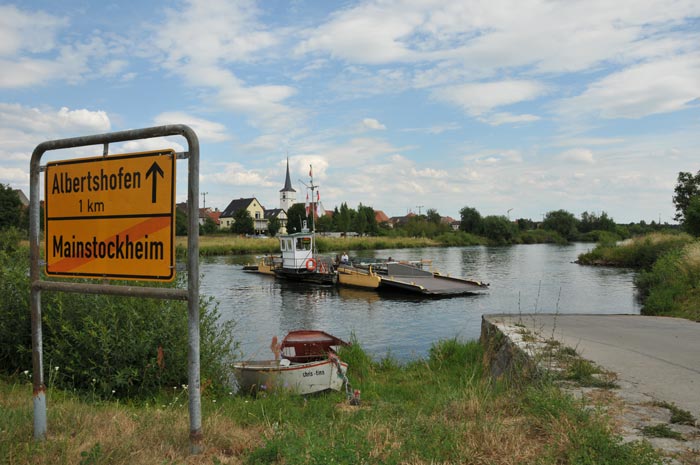 We were in the city of Kitzingen that located in the Franconia region of Germany. The River Main, which is the longest river of Germany, passes in the middle of this little city. It has 527 km length, continues its path by adding an extra beauty to the cities and flows into the Rhine River. 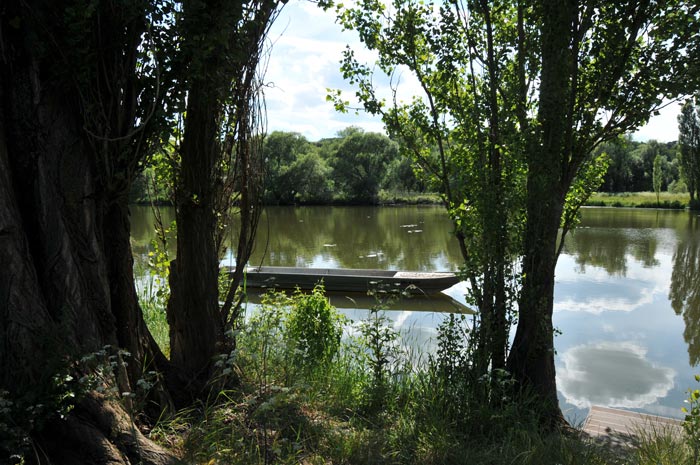 The Main River not only adds beauty to its geography, but also gives life with its rich fauna and flora, contributes to the trade with sea transport. In addition, the Main has an incredible contribution to tourism with the water sports and the bicycle path along the river. River Main Cycle Route (Main-Radweg), which is approximately 600 km long, is the first long distance bicycle path that awarded with five stars by General German Bicycle Club ADFC. Throughout the Main River, by covering short distances, our aim was first to be acquainted with the environment, then to get into shape. The starting point of our bicycle tour was the town of Albertshofen that we resided. 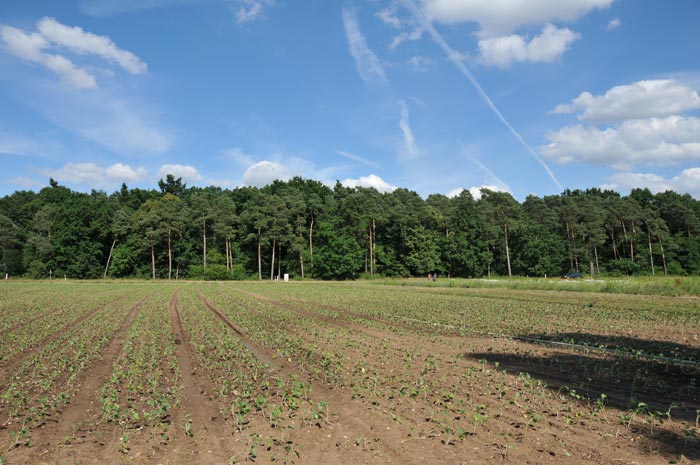 Throughout the fresh vegetable fields, we followed the bicycle path in order to reach the Main river. Nowadays, the fields need to be irrigated every day since the air is dry and sunny. But this situation won’t last long. I have difficulty in adapting the weather conditions of Germany that change at any moment. 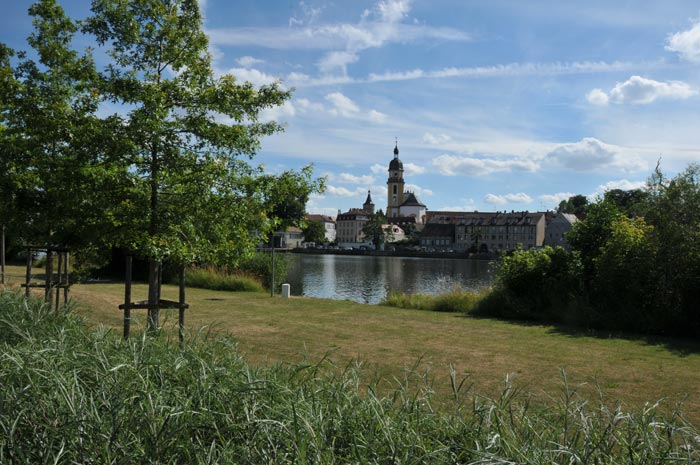 Passing the vegetable fields, we came to the motor caravan park. Whenever we drive through this motor caravan camp site, we see new caravans. It is quite a well-kept area on the river side. 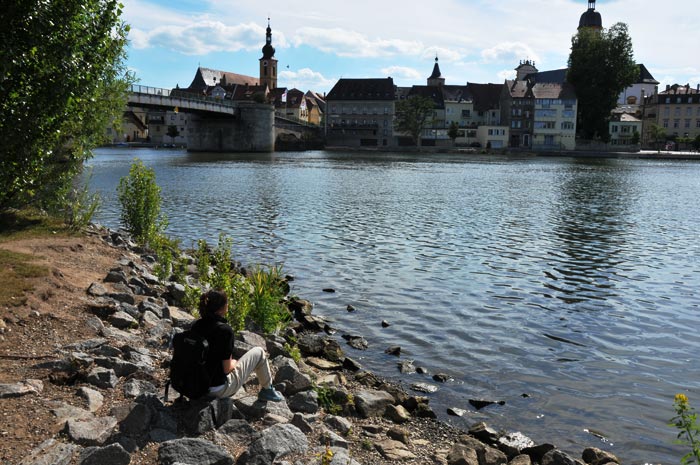 After passing the camping site, we stopped over in the Main riverside and watched the scenery of the opposite shore. St. Johannes Church in the city center, City Hall of Kitzingen and the old Main bridge are the baselines of our view. 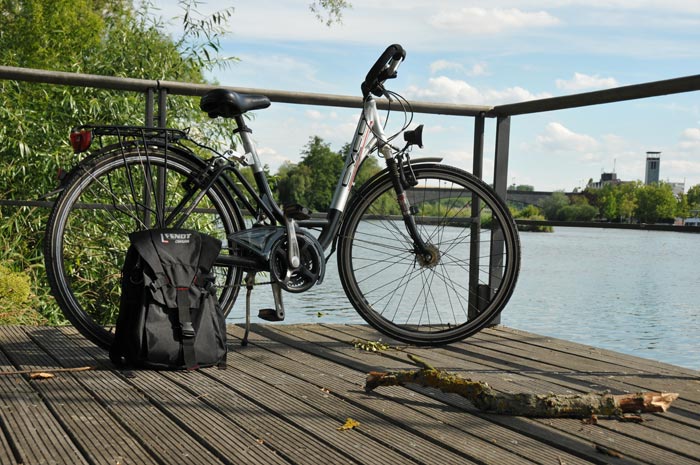 Throughout the Main river, these boardwalks are my favorites in the city of Kitzingen. Besides of wooden banks, there are green field and playground in this area. These platforms, which attract intensive attention of students, lovers and families with children, especially in the evenings and weekends, are the frequently visited places by the ones who stroll around alone and prefer to read a book or catch fish. 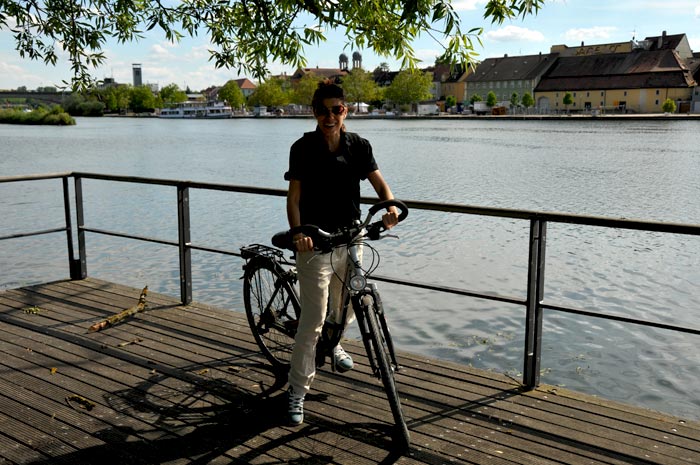 In such a beautiful air, cycling along the River Main Cycle Route is incredibly amusing and pleasant. In the background, you may see the old synagogue of Kitzingen city and the ships that tour daily along the river. Also, you may read the joy of bicycle from my face. 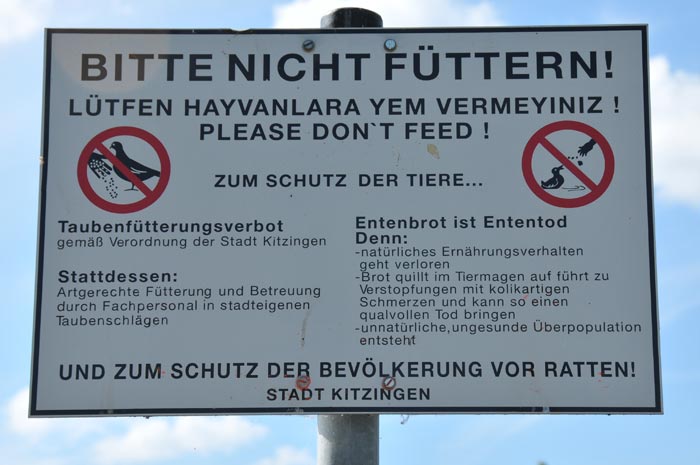 The array of different languages on the signboard drew our attention. Back in the day, the second rank belonged to the English, but nowadays in some regions of Germany, Turkish replaces it and English falls to the rank of three. Time is changing... 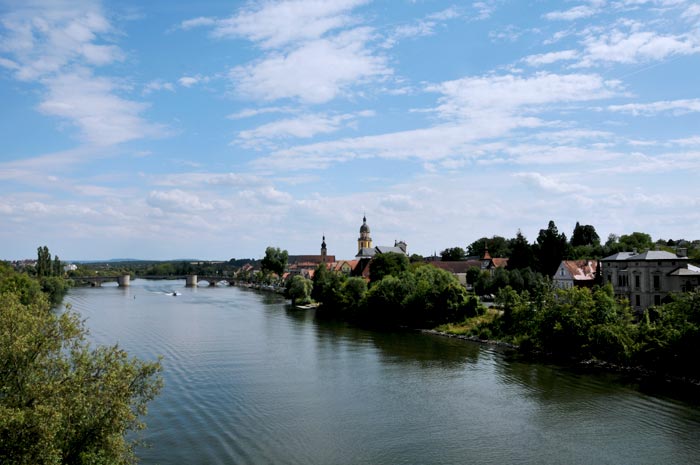 We were near the sports arena and since we wanted to cross the opposite side, rode our bicycles back through the direction of Albertshofen. While watching the marvelous view of Main, the old Main bridge and the city of Kitzingen look quite beautiful from the north. 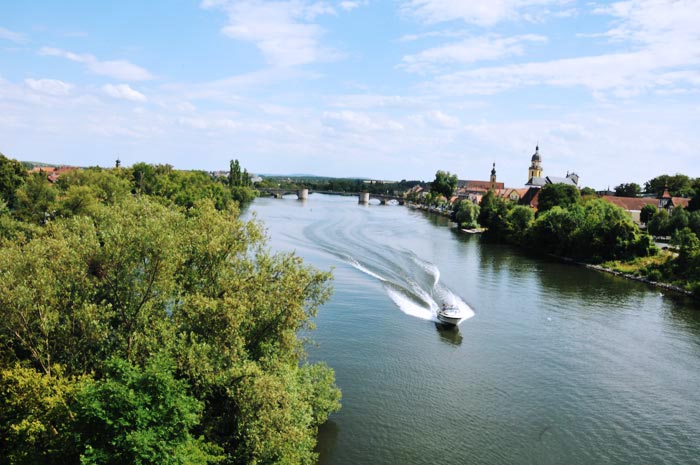 While staring into the view, a speedboat approached to the bridge and seeing that we were taking photographs, saluted us. 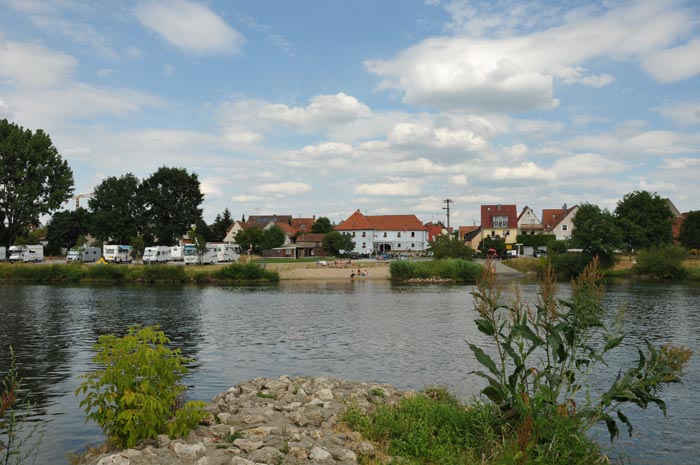 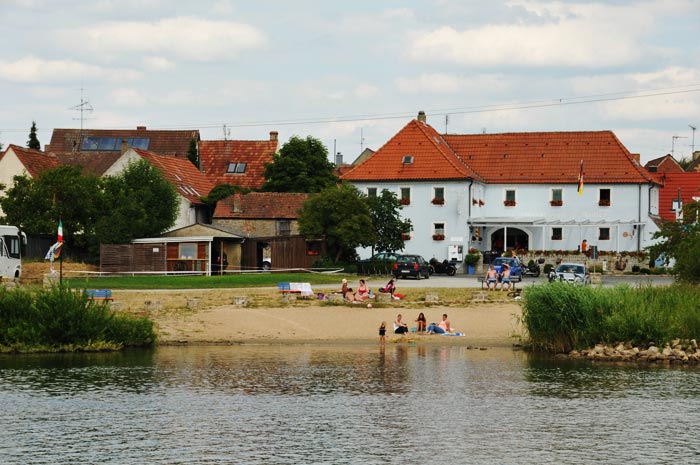 We could see the town of Albertshofen’s sandy coast on the opposite shore. Although the weather was cloudy, people that tan in the sun were enjoying the Main river. Under favor of the environment and nature protection rules that are applied meticulously, the Main’s water stays clean and does not have any risk for swimming.

Since the opposite shore is Albertshofen anyway, is it possible that the Main river has one km width or is it merely an optical illusion? Our current location is such a romantic place that any technical detail could not spoil it. All the ferries are the center of interest in the region and besides of shipping, they contribute to the tourism. 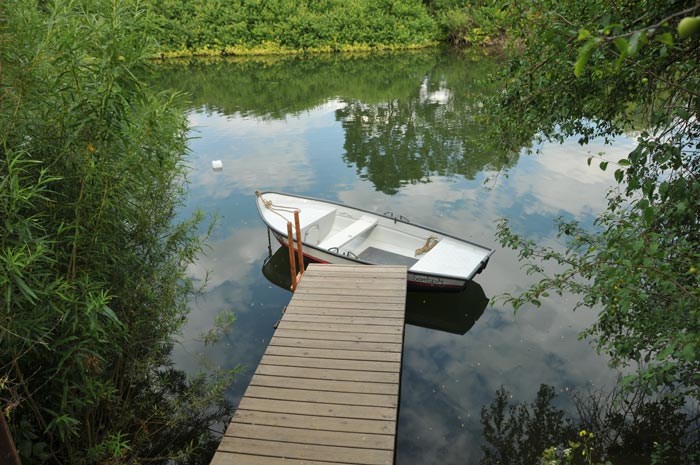 Along the Main, our bicycle tour continued. Speaking of romanticism, near the bicycle path there was this pretty boat, which was tied to a little pier on the riverside of Main, achieved to stop us. We hardly contained ourselves from jumping into the boat on a pier where the river almost stands to reflect the sky. 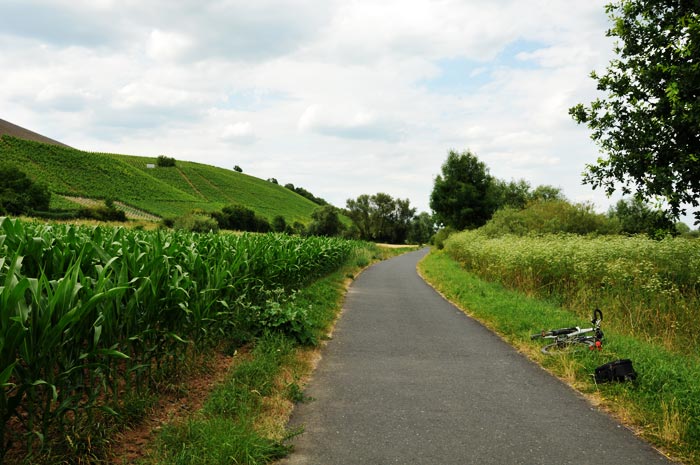 On our right side the Main river, on the left side cornfield and at the slopes there were hanging gardens. It was a beautiful summer evening in Germany, nature was green and vivacious to the utmost that the clouding sky could not upset us. By the way, there was no time to park the bicycle because of our hurry to take photographs. 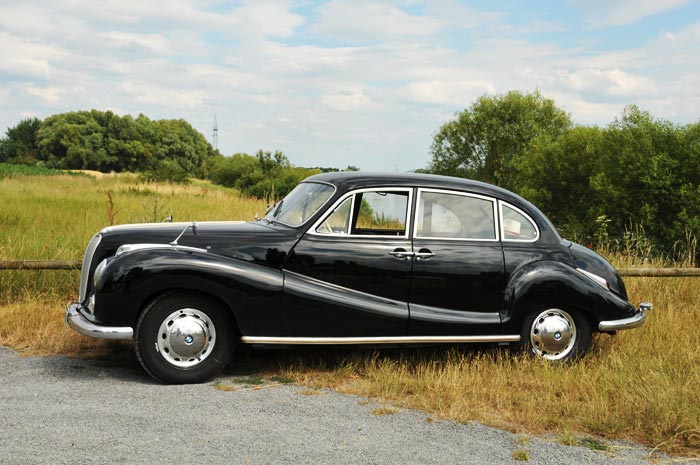 While we were on the shore of Dettelbach to go by ferry, we encountered this treasure. It is an old BMW that elaborated and decorated by a classic car enthusiast in the region. There, we left the Main bicycle path and returned home. After passing to the opposite shore with ferry, we rode our bicycles along the golf course and came back to Albertshofen. 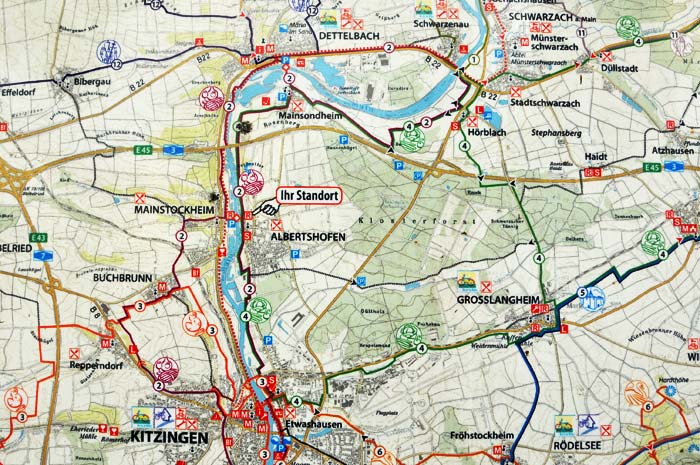 The signboard on the coast of Albertshofen has a map that shows the River Main Cycle Route. For the next time, we decided to take a road map with us before starting to tour.