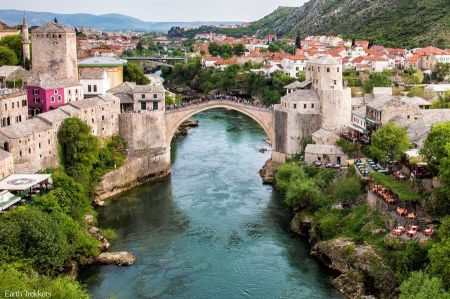 Although the young state of Bosnia-Herzegovina, which emerged from the multi-ethnic state of Yugoslavia, is not yet really known as a tourist destination, the more courageous travelers of this country are definitely drawn to the city of Mostar and its most famous landmark, the Stari most bridge.

It was similar for us as part of our project work on the development of camper tourism in the Balkans, but to make a detour to Mostar, especially since we were on the way from Shkodra via Dubrovnik to Omis, the actual destination of today's stage, into Bosnia-Herzegovina. On the way, shortly before the town of Neum in Bosnia-Herzegovina, one can observe another “strange thing” that our modern times, better their conflicts, sometimes bring with them, as we need to know from history in Germany with the two-state solution and the separation of Berlin for several decades. A divided country, what this time Croatia has in common.

However, once out of Croatia and into Bosnia-Herzegovina, it is obvious to make the detour to Mostar. A little later you get to the town of Neum, turn right in the direction of Hutovo, come to the state road R426, which you follow to the confluence with the M17 and after about 85 kilometers you reach the town of Mostar. Of course we straight went to the city center, where we were excited about the famous bridge. 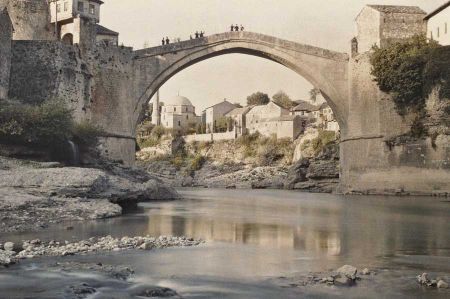 The Stari most bridge has been a kind of symbolic bridge between east and west for centuries. It was built from 1556 to 1566 by the Ottoman architect Mimar Hayreddin on behalf of the Ottoman Sultan Suleyman I as a single arch bridge. Hayreddin was a student of the most important Ottoman architect Mimar Sinan. According to an unproven legend, Hayreddin tested the new concept of bridge construction on a smaller scale before building the actual bridge known today as “Stari Most”. For this purpose, an identical miniature was erected near the actual location, which still exists today. Until then, the architect had just become known for building mosques. This miniature is called Kriva Cuprija and spans the Radobolja river.

The Stari most bridge, on the other hand, spans the Neretva a little above the mouth of the Radobolja and connects the more Muslim eastern part with the more Catholic western part of the city. With a clear width of 28.7 meters and 19.00 meters high (at the apex above the Neretva) it was a masterpiece of engineering when it was built in 1566.

Not just because of its architectural uniqueness, but also because of the great symbolic power of the bridge, the building and its historical surroundings were added to the UNESCO World Heritage List on July 15, 2005, making them the first World Heritage Site in Bosnia-Herzegovina. UNESCO recognized the bridge as a "symbol of reconciliation and international cooperation [...] and [...] a symbol for the coexistence of different religious, cultural and ethnic communities". It is also a protected cultural asset under the Hague Convention. We will specifically address these circumstances in a later article.

Imposing construction in the shape of an ellipse 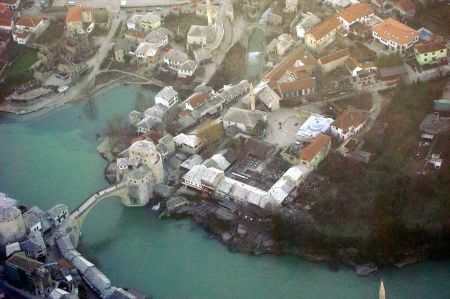 The arch with the shape of an ellipse and a small kink in the apex has a clear width of 28.7 meters and a pillar height of 12.00 meters. At the apex the thickness was 0.77 meters with a building width of 4.00 meters. Two cavities in the arch reduced the weight of the bridge and made the slender arch construction possible. The arch ends in limestone support pillars, which are connected to the bank walls by wing masonry, which creates a monolithic impression.

Anecdotes and mythology about Hayreddin

Hayreddin had never seen the completed bridge. According to old legends, Hayreddin's head was cut off as a punishment after the bridge collapsed. The bridge had already fallen into the river twice before, which is why the population said: “The river cannot be crossed.” Hayreddin retired not far from the city of Mostar, to the Bijelo Polje (White Field) area, and waited for his news Emissaries who supervised the dismantling of the scaffolding. After the news was brought to him that everything was in order with the bridge, he rode over the Velež massif towards Turkey. During the trip he fell ill with jaundice and died of the disease in Jedrenè in what is now Bulgaria.

According to another legend, unwashed sheep's wool, egg white and honey were used as binding agents (mortar) for the construction of the bridge, which is why egg consumption was absolutely forbidden in the entire area. Allegedly 300,000 eggs were used.