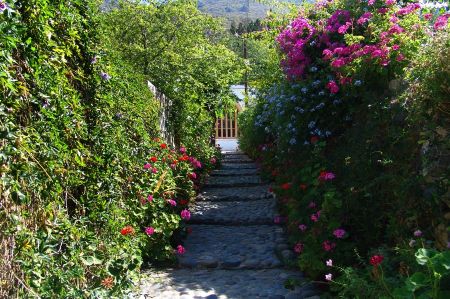 Karaman or Karmi is undoubtedly the prettiest and most well-kept village in Northern Cyprus. Time here seems to have stood still; little cobbled streets, meander around, running mountain streams and wild-life are the only sounds you are likely to hear.

The village has most amenities. The village shop, which stocks all the essentials, including fresh bread, acts as the postoffice and a source of general information.

There are two bars; The Crows Nest Pub is open all year round and Spot is open for the summer months. The village has two restaurants; Levant, next to the church and Kismet View in the lower village. The old Greek Orthodox Church is now a museum and is open on most Sunday mornings around 11. The village is so small that nothing is more than 5 minutes walk away.

Karmi village was abandoned by its Greek-Cypriot inhabitants during the 1974 intervention. Within a short period of time the village became a ghost town and very run down, losing all its' peace and charm.

The Council of Ministers decided to put in action an innovative rejuvenation project in 1979 which would bring back to life this small village of amazing natural beauty that has appealed to foreigners for a long time. In the early 1980's the village was declared a special tourist area and the houses rented to mainly British and German residents to rebuild and renovate.

In 1983 the Ministry of Interior started to lease out the properties on 49 year renewable leases, mainly to people from the UK. Slowly over the next 7 years the infrastructure was improved by adding in new roads, water supplies and electricity. Great importance was shown to keep the character of the village whilst making sure that the new inhabitants had all their modern needs taken into consideration. Solar heaters are not permitted to be placed on the roofs, wooden rafters and rush mats were used for ceilings and height of water tanks is limited to 60cm above roof level in order not to spoil the village atmosphere.