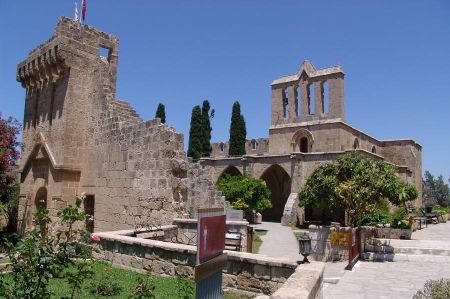 Nestled in the delightful village of Bellapais, high in the Five Finger Mountains, is the Bellapais Abbey. The name Bellapais is said to derive from the French “Abbaye de la paix” meaning Monastery of Peace.

The Bellapais Abbey was originally established by Augustinian monks arriving from Jerusalem, who began constructing the first buildings here in 1198. Much of what we can see today was built by the Lusignans, including the magnificent Gothic refectory and cloisters. Although the Monastery subsequently enjoyed a rise to prominence as an important religious relic, its treasury was plundered when the Genovese invaded in 1373, marking a rapid decline in the monastery’s fortunes. Following the Ottoman conquest of Cyprus, the building was given to the Greek Orthodox Church who built the 13th Century Abbey which you can see today. These monks are said to have integrated into village life and that some families who live there today are part of that ancestry, but the building later fell into disrepair and the grounds were used for animal grazing. However, it has undergone an extensive series of repairs since the 1960s, restoring it to days reminiscent of its former glory.

The Bellapais Abbey is extremely atmospheric and you will enjoy exploring the ruins, great Gothic arches and soaring stone walls. Enter the gateway and discover the Abbey Church, old cellars and kitchens with the crypt below and cloisters where four huge cypress trees tower high above, creating a glorious and arresting tableau. Wander amongst the ruins into the refectory, a grand hall where the original pulpit still remains. The six enormous windows offer a glorious view across the rolling hills and shoreline below.

Built by a 12th century monk originally from Asia Minor, the striking stone church of Antiphonitis (or Anthipanitis, meaning “Replying to Christ”) is part of a former monastery. Tucked away in the Five Finger Mountains, the church boasts a stunning vista across the North Cyprus coastline. Inside, you will discover an elegant dome supported by circular columns and arranged in an octagon, with a 15th century-built barrel vaulted and tiled outside loggia and front entrance porch. This design makes the church of Antiphonitis unique in North Cyprus and although much of the church is now derelict, you can still see the remains of the original frescoes inside, plus some added later in the 15th century.