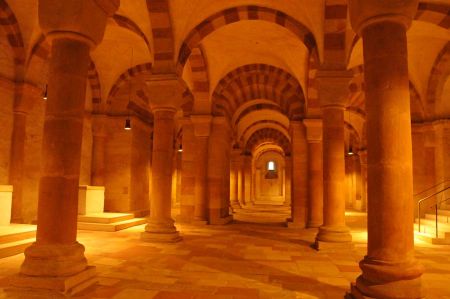 In architecture, a crypt is a stone chamber or vault beneath the floor of a church usually used as a chapel or burial vault possibly containing sarcophagi, coffins or relics.

Originally crypts were typically found below the main apse of a church, such as at the Abbey of Saint-Germain en Auxerre, but were later located beneath naves and transepts as well. Occasionally churches were raised high to accommodate a crypt at the ground level, such as St Michael's Church in Hildesheim, Germany.

First known in the early Christian period, in particular North Africa at Orleansville and Djemila in Algeria, and Byzantium at Saint John Studio in Constantinople. Where Christian churches have been built over mithraea, the mithraeum has often been adapted to serve as a crypt.