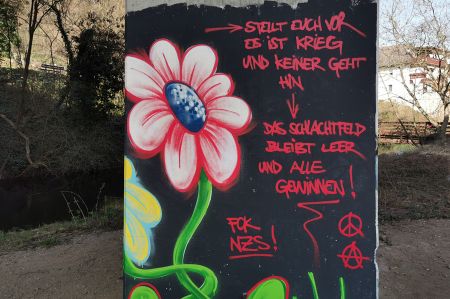 It was this quote, which is commonly and often attributed to Berthold Brecht, that we found among other graffiti under a car bridge in Weil and thus obliged us to do a little research.

How much deeper meaning there is in this statement again and again, especially now in the face of the criminal war in the Ukraine. By no means should the other conflicts and wars remain unconsidered. Will people one day become so "smart" and stop listening to hate speech, power-mongers and despots, regardless of whether they are political or religious?

This probably the most popular slogan of the former peace movement became famous in America in the version "Suppose They Gave a War and No One Came" in an article by the author Charlotte Keyes from 1966, and also appeared in Germany at the end of the 1970s, where it was soon erroneously called Bertolt Brecht was foisted on. The influential language critic and style teacher Wolf Schneider, for example, illustrated the greatness of Bertolt Brecht's language with this American quote, "in the chiseled simplicity that he schooled on Luther":

"The poet Bert Brecht, however, achieved great things for the German language and through it: on the one hand in the chiseled simplicity that he schooled on Luther ("Just imagine, it's war and nobody goes there"), on the other hand in the cheeky , cynical power - from the 'The Threepenny Opera' [...] to his 'Second Psalm'". 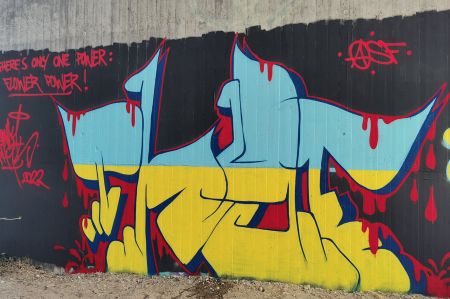 In 1981, this pacifist motto became popular throughout Germany thanks to the graphics by the Hamburg designer Johannes Hartmann, and although Ralf Bülow published it in 1983 in 'Sprachdienst', Siegfried Unseld in 1991 in a letter to the editor of the FAZ and finally Christoph Drösser in 2002 in the ZEIT column "Is that right? " and many others pointed out that the saying goes back to the American poet Carl Sandburg and has nothing to do with Bertolt Brecht, the slogan is still being foisted on Bertolt Brecht in 2018.

"Imagine it's war and nobody goes there. Then the war will come to you!

Those who stay at home when the fight begins and let others fight for their cause must be careful: for those who have not shared the fight will share the defeat. He who avoids battle does not even avoid battle, for he will fight in the enemy's cause who has not fought in his own cause."

Carl August Sandburg was an American poet, novelist, journalist, and historian, best known for his poetry and his Pulitzer Prize-winning biography of Abraham Lincoln. The line from his poem The People, Yes, "Sometime they'll give a war and nobody will come" (translated as: "Imagine, it's war and nobody's going") became particularly popular in German-speaking countries. 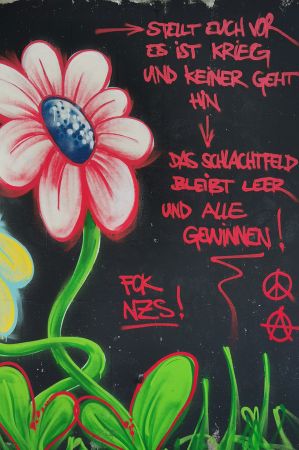 Sandburg was the son of European parents of Swedish descent; his father was a blacksmith and railway worker. He grew up in Illinois in the Midwest. Sandburg left school at the age of 13 and got by in a variety of jobs, including painting. He was a volunteer in the Spanish-American War and took part in the landings at Guánica, Puerto Rico on July 25, 1898, but was not involved in combat. After a short visit (two weeks - he said he failed the entrance tests in grammar and arithmetic) at West Point, he attended Lombard College in his native Galesburg, but left without a degree in 1903. In Milwaukee, he joined the Social Democratic Party and became secretary to Social Democratic Mayor Emil Seidel (then the first "socialist" mayor in the United States). He also met Lilian Steichen (called Paula) with the Social Democrats. She was a sister of photographer Edward Steichen, whose biography he wrote in 1929. Carl Sandburg and Lilian Steichen married in 1908; the marriage produced three daughters. During the First World War he was a war correspondent (recounted in "Cornhuskers" 1918). Sandburg lived in and around Chicago from 1912 to 1928, where he was a reporter for the Chicago Daily News (from 1919) and the Day Book. As early as 1904 he published his first volumes of poetry (as Charles Sandburg, "In Reckless Ecstasy"). His book of poems "Chicago" from 1916, in which he characterized the city as follows, became famous:

"Hog Butcher for the World
Tool Maker, Stacker of Wheat
Player with Railroads and the Nation's Freight Handler
Stormy, Husky, Brawling, and City of the Big Shoulders”

His only novel "Remembrance Rock" was published in 1948. He also wrote autobiographical works ("Always the young strangers" 1953, "Ever the winds of change" 1983).

Sandburg has worked on screenplays for film and television five times. He wrote his first screenplay in 1941 for the documentary film Bomber. Carl Sandburg wrote the foreword for the catalog of the exhibition The Family of Man, which his brother-in-law Edward Steichen curated.

In 1928 he moved to Herbert, Michigan, where he was again active in the socialist movement during the economic crisis of the 1930s. From 1945 he lived in Flat Rock (North Carolina) on his property "Connemara", which is now managed by the National Park Service. While Sandburg was able to write there in peace, his wife took over the farming.

Wood carving - an encounter with wood art in Garnbach

The Marienburg on the right bank of the Nogat