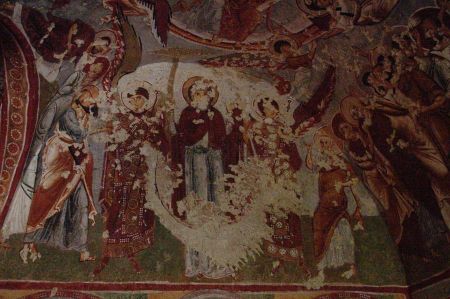 Sumela, Turkey - The Turkish government allowed Christians to pray Sunday at a spectacular and politically sensitive Greek Orthodox monastery for the first time since the country's creation, seeking to improve the country's record on religious tolerance and boost tourism.

The emotional, three-hour service at Sumela Monastery in Turkey's Black Sea region was the first of two special church openings the government recently has permitted. The second is due Sept. 19 at the Armenian Aghtamar Church on Lake Van in eastern Turkey.

Security was tight Sunday, with helicopters buzzing overhead and a large police presence. Most of the hundreds of people packed into Sumela's tiny cliff-hanging monastery were descendants of Pontic Greeks, forced from the coastal areas of the Black Sea in a huge population exchange between Turkey and Greece in 1923. Others fled to Russia.

"This is our fathers' land and the land of our grandfathers," said Father Athenagoras, from Thessaloniki, Greece, explaining the event's importance as he returned from wading into the crowd with a chalice of wine for communion. Other priests passed huge baskets of bread over the heads of jostling worshippers.

"We came because we think this is our native town," said Violetta Popova, a 20-year-old language student and Pontic Greek descendant who lives in Piatagorsk, Russia. Two Russian Cossacks in uniform held up an icon throughout the service. "We came to support our Greek brothers," said Ataman Oleg Gobelinski.

Ecumenical Patriarch Bartholomew thanked Turkey's government—and the medieval Ottoman Emperors who helped the monastery—in his sermon. He led the service with top prelates from Greece and Russia. But Turkey's government kept a low profile, represented by the mayor of the local town, Macka.

Only small numbers remain of Turkey's once-large Christian communities. While Christians have freedom of worship and access to churches, many holy places have been converted to mosques or museums, or were allowed to decay.

The political atmosphere in Turkey has transformed since the Islamic-leaning government agreed to the two church openings, more than a year ago. At the time the government was focused on a Democratic Opening policy, aimed at finding nonmilitary means of ending the country's decadeslong conflict with militants claiming to represent the country's ethnic Kurds by improving minority and religious rights. Those have been key demands of the European Union, which Turkey is negotiating to join.

But last fall, the Democratic Opening went sour. Attacks by the Kurdish Workers Party, or PKK, have renewed, triggering a nationalist backlash that dominates the political agenda ahead of elections due by July 2011. At the same time, negotiations to open the border between Turkey and Armenia are in deep freeze, with neither side ratifying a deal outlined last year.

That failure has fueled skepticism among some Armenians over September's service at the 10th-century Aghtamar, which served at one time as a seat of Armenia's national church. "This ceremony is pure propaganda to cover for the crimes of modern Turkey—the destruction of 3,000 Christian monuments," said Hayk Demoyan, director of the Armenian Genocide Museum in Yerevan, Armenia's capital. The museum honors the hundreds of thousands of Armenians killed around 1915. Turkey denies a genocide took place and says the dead were victims of civil war.

Turkey's culture ministry said in emailed responses to questions that the decision to open the two churches was a result of the ministry's "evaluation that visitor activity brought by religious tourism would contribute in solving economic, political and social problems in these regions and would have a positive impact on relations with neighboring countries."

While analysts say the Pontic Greeks and Armenians, and the church services, pose no threat to Turkey's territorial integrity, their talk of a lost homeland risks fueling Turkish nationalists. Trabzon, the major city near Sumela, is a hotbed of nationalism and there were scuffles last year when Christian worshippers sought to pray at the monastery. A gunman who shot Armenian journalist Hrant Dink in 2007 was from Trabzon.

Until now, worshippers have been barred from conducting services at the Sumela Monastery, founded in the 4th century.

"No one should fear believers, whether Christians or Muslims. The most dangerous people are nonbelievers," said Ivan Savvidi, a legislator of the Russian Duma and a diaspora leader of Pontic Greeks, said in response to questions from Turkish reporters at Sumela on Sunday.