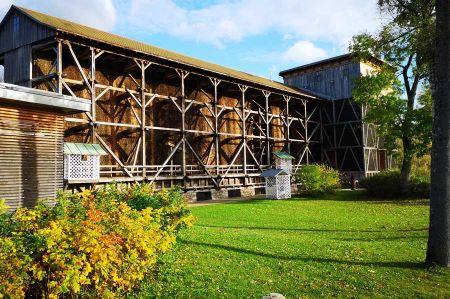 Salt was extracted in Bad Kissingen for more than 1,000 years - the imposing graduation tower that we were able to visit in the evening still bears witness to this.

As part of the former salt extraction system, this elaborate wooden structure was used to evaporate the water to concentrate the salt solution. This enabled the rather low salt content of the Kissinger natural brine to be significantly increased. Salt production in Bad Kissingen was stopped in 1968, but the graduation tower has played an important role in brine inhalation ever since.

At the location of today's Lower Saline, the existence of a superioris salina is known as early as 823; The Reiche Brunnen, which is also located here, has been guaranteed for the Carolingian period and the Middle Ages. The surrounding landscape has an almost park-like character and is ideal for long walks. The first graduation tower was built here in 1562 - a technical innovation that quickly spread across Europe. The “Salt Production” exhibition in the Obere Saline Museum takes visitors into the world of white gold and shows how brine, salt and healing springs promoted Bad Kissingen's economic development.

Development by K. Seiler and B. Holzschuhmacher 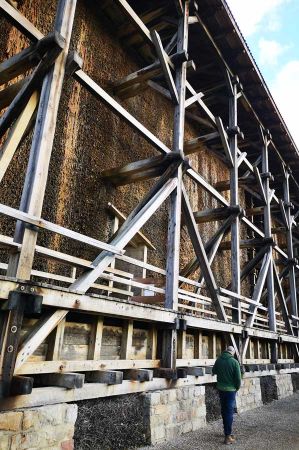 Since the beginning of the 16th century, Kissingen spa guests have been handed down by name. The beginnings and history of the Kissingen spa, the mineral springs and the spa medicine are presented in the section of the “Kissingen Heilbad” museum.

In the course of the promotion of salt production in Hausen by Prince-Bishop Friedrich von Wirsberg, who employed the traders Kaspar Seiler (Augsburg) and Berthold Holzschuhmacher (Nuremberg) as tenants, a new salt works with a well house above the brine spring was built here, which included a mechanically operated pumping station. The graduation house set up by Kaspar Seiler in the Lower Saline, in which the brine flows over brushwood and evaporates, which increases the salt content in the brine before it actually evaporates, was the first of its kind in Germany. After failed attempts in Reichenhall and Soden it is just here that Kaspar Seiler is able to put this project into practice.

Bundles of black thorns are worked into the wooden beams of the graduation tower, on which the brine trickles down and evaporates. Small amounts of purified salt particles get into the air and create a healthy microclimate around the graduation tower. In its effect, it is similar to the climate on the North Sea. Conscious inhalation can help clear the airways, regenerate lung function and strengthen the immune system.

Salt house opposite the Lower Saline 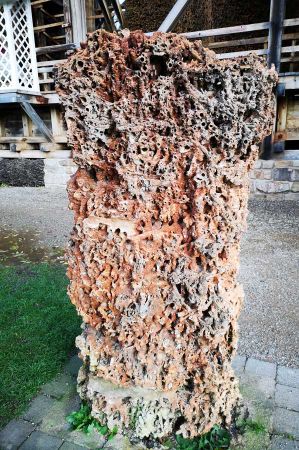 After Prince-Bishop Wirsberg's efforts failed, his successor Julius Echter von Mespelbrunn successfully started another attempt with Jobst Deichmann from Münnerstadt. Under Julius Echter, buildings were built between the fountain house and the brewhouse, as well as a residential building on the Lower Saline by 1575 at the latest.

After salt production came to a standstill during the Thirty Years' War, Prince-Bishop Friedrich Karl von Schönborn-Buchheim tried to revitalize it in 1655. He had the springs cleaned and the brewing facilities restored. In the second half of the 18th century, opposite the Lower Saline, the associated salt house, which served as a Gutsolereservoir, was built; it houses two large saltwater pools. At the same time, two elongated graduation towers were built between the Upper Saline and Lower Saline, which were overhauled several times as required.

The Lower Saline proved to be more productive than the Upper Saline due to the Reichen Brunnen, but the Reiche Brunnen dried up in 1822 due to new boreholes. Most of the technical facilities of the Lower Saline were demolished; the functions of the rich fountain were now taken over by the round fountain and the brine fountain.

The first turbine-operated pumping station on the Lower Saline was built in 1848; Another pumping station installed in the half-timbered house followed in 1883. In 1867, after the salt production was stopped, the graduation towers, which were repeatedly repaired, were demolished with the exception of a few remains; The only remaining remnant of the graduation tower belonging to the Lower Saline is the water tower. 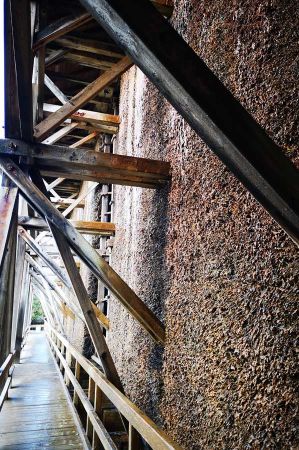 After Reichenbrunnen came to an end, the Lower Saline took on a new meaning when the healing properties of salt were recognized. The remaining remains of the graduation tower were increasingly used to inhale salt air; In 1994/1995 the graduation tower was demolished and partially rebuilt. In 1837, architect Friedrich von Gärtner built a cast-iron brine pipeline to Kissingen, which reached as far as the former brine reservoir at Salinenstrasse 8.

You can see the free pump next to the graduation tower. At that time, this was used to circulate the freshly extracted brine. In the immediate vicinity is the brine Kneipp pool, where you can experience the beneficial effects of Bad Kissingen's healing waters in the form of treading water and at the same time strengthen your immune system. Sebastian Kneipp developed his doctrine of a healthy lifestyle and natural healing more than 100 years ago, which includes Kneipp therapy. Information boards on correct use can be found on site. The brine Kneipp pool is fed by the overflow of the round fountain. This source also supplies the graduation tower and is an intermittent source of carbonic acid that surges to the surface at intervals of 55 seconds. We recommend a visit to the round fountain. 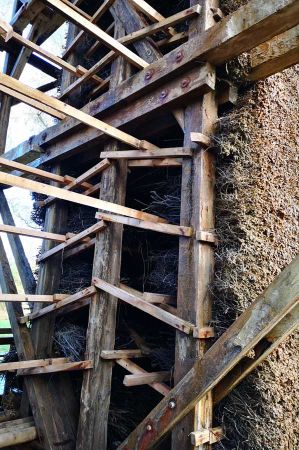 In 1841 the salt bath was built above the brine spring. It consisted of bathroom cabinets along a central corridor and was redesigned several times (around 1862–1863 and 1875–1876). A lodging house was added as early as 1850–1852. The salt bath had an imperial bath at the south end as well as a princely bath set up for Chancellor Otto von Bismarck. In 1965 the salt bath was demolished for the construction of the Heinz Kalk Clinic, which no longer existed.

Together with the Salinenbad, also in 1841, the Salinen-Café was built next to the graduation tower. From small beginnings, which initially provided for self-service, among other things, it developed into an excursion restaurant with a garden. Due to its half-timbered construction with generous glazing, it was given the name “glass pavilion” in the 19th century. The arbors around the main building were called "Bark Café" because of the cork lining of their woodwork. The music pavilion was located between the saline café and the graduation tower. When the salt baths ceased operations, there was no more access to the salt mine café, so it was demolished in 1964.

Witnesses of the past in the vicinity of the graduation tower 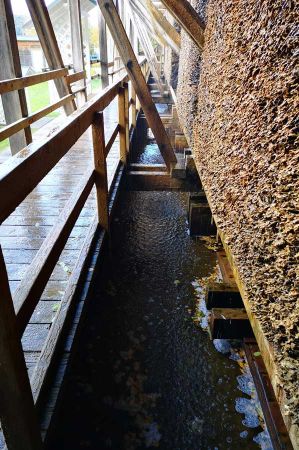 After the end of the Second World War, at the instigation of the then Mayor of Hausen, Josef Müller, displaced persons were housed in the Lower Saline. In retrospect, the expellees described the citizens of Hausen as very helpful and their stay in the Lower Saline as very helpful for reintegration. An exhibition on the subject planned by the Bad Kissingen city archive in autumn 2004 did not materialize.

Due to a threat to the round fountain belonging to the Lower Saline from the previous Hausen sewage disposal (the sewage was directed into the Nüdlinger Bach, the Mühlbach and the Franconian Saale), planning began in 1953 to set up a sewerage system in Hausen. It was considered to set up a separate sewage treatment plant for Hausen or to connect the place to the Bad Kissingen sewer system; but the choice fell on the latter variant. The project was implemented from 1969/70 and came to a conclusion in 1974/75 - accelerated by the interim municipal reform of 1972 - with the final measures for a complete sewer connection to Bad Kissingen.

In 1994 the new construction of the north wing of the graduation tower, which was demolished in the previous year, begins with a total cost of DM 1.7 million; also in 1994 the south wing was demolished while preserving the foundations (cost: 360,000 DM). In 1998 the stair tower was demolished due to its dilapidation (cost: 1.6 million DM).

In addition to a new borehole for the Schönbornsprudel, a construction project has been underway since winter 2010 to renew the water pipes, which also includes the water pipes for the round fountain; the construction work should be finished in 2012. A general renovation of the round fountain is not necessary, as an investigation by the Bad Kissingen water management office has shown.