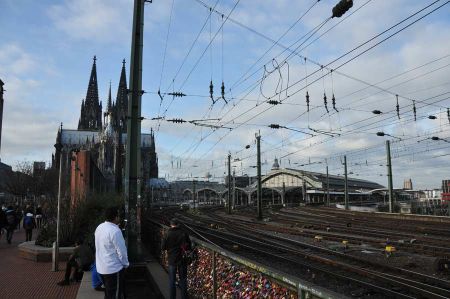 Our short walking tour through the centre of Cologne had lead us into the direction of Central Train Station and to Hohenzollern Bridge, where the architecture of the bridge does not only counts to the peculiarities of Cologne, but is also the original place, at least for Germany, of an interesting tradition to be seen in thousands: the Love Locks.

Enamored couple fix locks on bridges as a symbol of their eternal love which are often provided with initials and date of becoming acquainted. After attaching the love locks the key is then thrown into the river, often with a finally tender embrace, the couples swear eternal love. At the Milvian Bridge, an ancient bridge going back to Roman period, which spans the Tiber river in Rome, the procedure is done with the saying "per semper", which can be translated as "forever". For the first time, so the towns local historians say, such love padlocks had been noticed in Cologne in late summer 2008, which makes this bridge to one of the oldest sites of this custom in Germany.

The exact origin of the custom of love locks is unclear. The inception of the tradition in Europe, historians most probably suspect by graduates of the Medical Academy of San Giorgio in Florence. With the end of their training period, the local custom of the graduates is like that: they take the locks from their lockers which then were fixed at the Ponte Vecchio, because they were not used anymore. This process should then have been copied by loving couple as a custom to Rome to the Milvian Bridge. From here this custom then was spread in many other countries. In Vrnjacka Banja of Serbia, so Historians claim their tradition, the local Love Bridge is showing this custom since the First World War, when love locks were attached at the bridge railing. In Pécs, Hungary, the custom has been practiced on a wrought iron fence in the city since the early 1980s. Since this railing is now fully staffed, the city administration designed and fixed a new metal rod on which the lovers can fix their locks again. Meanwhile, love locks can also be found on benches near water, such as in Erfurt near the Krämerbrücke, at the Pilsum lighthouse, at Hase Bridge in Osnabrück or objects of romantic places. In Heidelberg a Love Stone was erected with eyelets for the locks to relieve the landmarked Old Bridge in July 2013.

The effects of this practice are highly and controversial discussed by politicians and citizens locally. In Rome Mayor Walter Vitroni banned the practice in 2007 after a lantern was bent over under the weight of the locks. However, the municipality of Rome shortly found a solution to continue with the tradition by attaching bollards with chains stretched between them for alternative places of love locks. On 8 June 2014, the bridge parapet of the Pont des Arts in Paris crashed due to the weight of about 93 tons of the attached locks over a length of 2.4 meters. The bridge had then to be blocked.

The emerging question of weight and number of locks in this context in many places is answered correspondingly controversial and some people estimate that in Cologne can be calculated that are between two and 15 tons of extra weight for a number of estimated 40,000 locks which are fixed. On many notable and famous bridges in other German cities this custom of lovers and married couple was also introduced and disseminated since then inexorably, leading to bans in many cities. So this practice is, for example, strictly forbidden in Venice and Berlin on bridges. This applies particularly to Venice's Rialto Bridge, which led to violent controversy in September, 2011. Locks were removed and the re-installation can cost up to 3,000 euros fine. In Berlin, it is a misdemeanor and can create cautionary fines, up to 35 euros will be charged. Affected are especially listed bridges. Some people are disturbed by the visual impression, but it may cause rust damage by electrolytic corrosion of noble brass of the locks against the baser iron bridges too.

There is nothing in the world, which is not to be discussed. Interesting and enlightening the tradition is at all. Whether it is conducive to the eternal love at least is still questionable. It would be desirable for all couples in our fast running time.