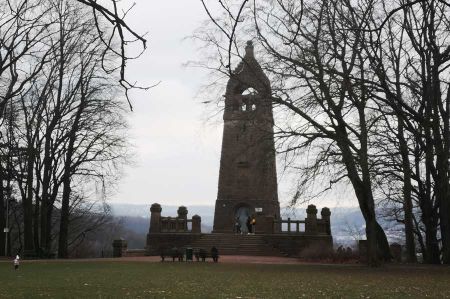 We had been hiking in Hohenstein recreation area in the foothills of the Ardey Mountains several times. This time it should hike to the Berger monument, an observation tower near Witten.

The 21 m high tower is located north of the Ruhr river and is part of the Hohenstein recreation area, two kilometers southeast of downtown Witten, and part of the industrial culture route on theme route 12: History and the present of the Ruhr. 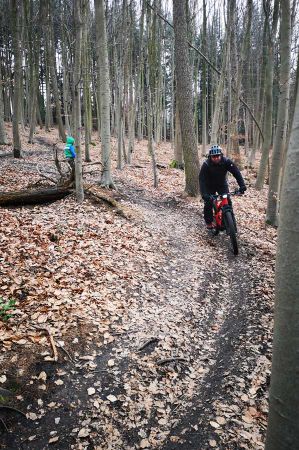 The gymnastics community in Witten from 1848 had built the monument in honor of its co-founder Louis Constanz Berger (1829-1891), an industrialist from Witten and a member of the German Reichstag. The construction of the tower was preceded by an invitation to tender and a competition between various builders and architects with their designs. In 1901 the foundation work began. The tower was built from Ruhr sandstone during the years from 1902 to 1904. The relief image of Berger and the inscription panel with the dedication inscription was executed in copper drifting and ceremoniously inaugurated on August 28, 1904, Berger's birthday.

The inscription plaque on the front of the tower above the entrance bears the dedication:

Louis Berger Witten,
the faithful friend of the people
and courageous defenders of their rights
the lawyer of the afflicted and always helpful man 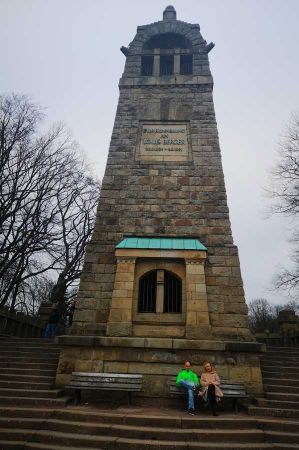 Klaus Lohmann, former mayor of the city of Witten, stated during his laudation for the 101-year celebration of the monument in 2005:

"Today this monument is a well-known landmark of Witten far beyond the city limits."

Because of his services to the promotion of rail traffic conditions, in particular his commitment to the construction of the Wengerohr-Wittlich railway connection, which was inaugurated in 1885, Berger was made the first honorary citizen of the city of Wittlich in 1884. In 2000 the Maare-Mosel-Radweg on the former railway line in Wittlich was named "Louis-Berger-Weg". 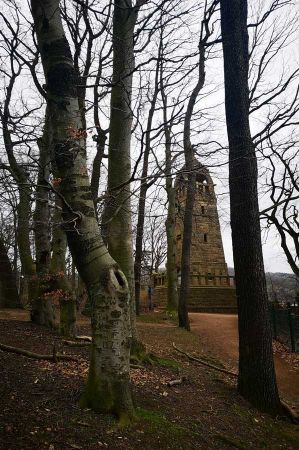 The Maare-Mosel-Radweg is a cycle route that connects Daun in the Vulkaneifel with the Moselle valley via the former secondary railway lines Daun – Wengerohr and Wengerohr – Bernkastel-Kues. On the old railway line it goes with a maximum gradient of 3% over viaducts, bridges, through tunnels and the Eifel forests down into the Moselle valley. The part of the Eifel, shaped by volcanism and the maars, is being replaced by the cultural landscape of viticulture on the Moselle, which is reached near the village of Lieser. The rest of the way to Bernkastel-Kues, the route follows the Moselle cycle path.

The route partly follows the course of the Moselle tributaries Alf and Lieser. The continuously paved route is suitable for recreational cyclists and families with children. The long slopes require a certain amount of practice from inline skaters. In the opposite direction, too, the maximum gradient is 3%. The Daun – Moselle valley route is uniformly marked in both directions with the cycle path logo. An almost flat, approx. 11 km long children's bike path has been created between Daun and Gillenfeld. You can find out more about the country and its people on the cycle adventure loops that branch off from the main route. Together with the mineral springs route, the Maare-Mosel cycle path connects the rivers Ahr and Moselle via a cycle route with only moderate inclines. 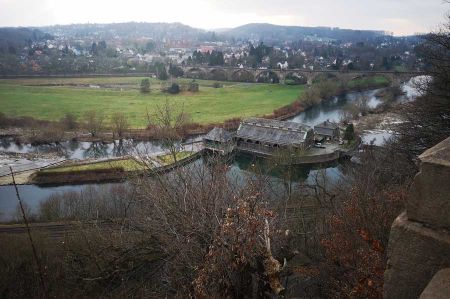 But now back to the Berger monument, whose tower is in good condition and whose entry is free. A spiral staircase leads to a viewing room in the upper part of the tower, which allows a wonderful view of the Ruhr valley and the Hohenstein hydroelectric power station.

The Hohenstein hydropower plant is one of two run-of-river power plants in Witten at Ruhr river. The building owner of the power plant, which was built on a Ruhr island between 1922 and 1925, was the Bredt shovel factory, located a little further downstream. The architecture of the power plant buildings in expressionist forms was designed by the Essen architect Edmund Körner. In 1928 VEW, now RWE, acquired the plant. The three original Francis turbines of the power plant had a total output of 1.75 megawatts. They were replaced by modern generators in 1996 after damage.

Since 1986 the power station has been listed as an architectural monument in the list of architectural monuments of the city of Witten. It is also a location on the Industrial Heritage Route, but cannot be visited regularly. The power plant is located below the Hohenstein ridge that gives it its name.