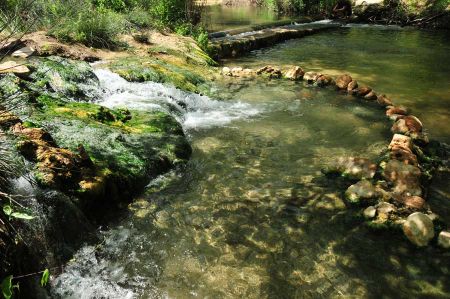 Even if the temperatures are rising continuously, one thinks that the many hot springs of Greece have lost their attractiveness during the summer months, one rubs his eyes in amazement when one comes to the springs of Eleftheres.

Often people are empty, the sources are currently almost completely in the hands of so-called Autonomer or squatters, which there are quite numerous in Greece, so guests of the sources are treated very courteous and hospitable. Once the hot springs of Eleftheres were the center of a relatively expensive therapeutic park, which is now almost completely dilapidated, but of course the healing effect of the hot springs does not detract. So you can enjoy the pleasant and healthy bath in sulphurous smelling wet completely free of charge at the moment.

At first Philipp and Micha had made us aware of the springs, which had already spent a lot of time here during the winter months and were thus able to make some contacts with residents living all year round. So it was especially for Micha a need to refresh the contacts during our visit. There had just been a small musical highlight on the spot, so there were still some techno sounds mixed with rap and beat, on a free area under the tall trees was still dancing and several tents were set up. The hot springs of Eleftheres are located near the seaside 45 km west of Kavala in the east of Greece. Leave the coastal road at the appropriate signage and drive for a few hundred meters through a narrow mountain valley with high trees to the thermal springs. 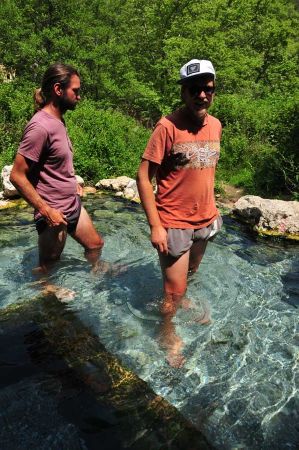 First, followed by a small tour of the plant, which was but strongly decayed, you can still see the large, common bathrooms, the individual rooms in which some of the baths are still preserved, well recognizable the houses to accommodate the guests, small Hotels, inns, .... and again squatters, which at least partially also for some order in the decay provide. Perhaps because of our visit on the holiday were quite numerous also Greek families on site, who had come here with their children for a picnic. In general, there was a colorful bustle of culturally so different groups together, which we received enthusiastically. Even for larger campers, the access to the hot springs of Eleftheres is no problem, parking lots available. Numerous springs along the small stream provide the hot water with temperatures of 35 ° to about 42 °.

For us a remarkable destination on the way to Kavala, which we will remember for the winter months. By the way, the road between Thessalonica and Kavala also leads right past the lion of Amphipolis, at least if you do not use the highway. Stay interested.