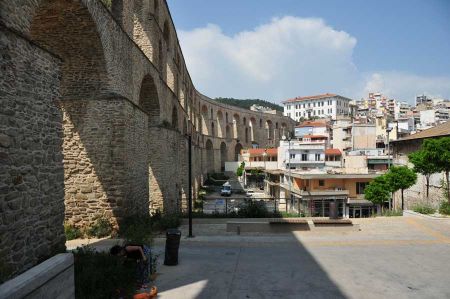 After the stopover in Stobi in Macedonia (Camperstop) we continued our journey towards Izmir to the opening ceremony of our project at the Goethe Institute.

As a last stop before entering Turkey, we had selected a campsite in Kavala for the upcoming night and made several attempts during the journey to make contact by phone. Unfortunately the contact was not successful. No matter, a campsite does not just disappear, so our thoughts, so let's go to Kavala.

After a brief refreshment in Thessalonica, there were only a few kilometers left on the easy to drive, modern 4-lane highway, which is like her 2,000-year-old predecessor again called Via Egnatia (Egnatia Odos). Several times we had driven the route by car, the only change compared to these tours was the increased toll due to the trailer. We had entered the coordinates of the campsite into our navigation system so that we could easily find the campsite. Shortly after leaving the motorway, however, a complex construction site appeared, which had led to the closure of the road. Repentance was necessary and now it was a bit adventurous. Although a replacement route was quickly displayed, which, however, for us initially not apparent, steeply downhill through narrow streets, so that our towing vehicle really had to fight. Without four-wheel drive, a route that should be avoided if possible. On the way back, we chose the route through the narrow inner city, but at least without parked cars at only 5 meters wide street.

Kavala - Camping at the hotel complex 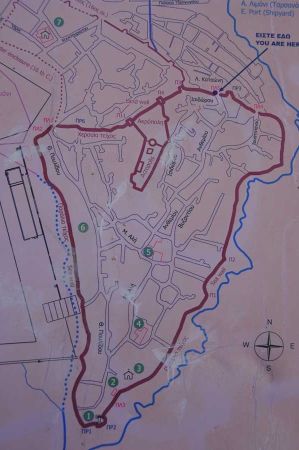 The campsite on a hotel complex looked really inviting, the gate barrier was wide open and at the front desk the surveillance monitors were running, just ..... Staff was not to discover even after several round trips crossing the place. We were just too early, the camping season was not opened here. After a short visit and examination of the bathrooms, which had not yet prepared for the new season, but still had hot water, we decided to enter the grounds. The individual pitches were neatly set and separated from each with bushes from the neighboring plot, a conspicuous but for us currently less significant feature, because we were almost alone, only a few vehicles of permanent campers placed uninhabited locally. When we also found a camping power connection on one of the plot, everything was fine. Only the next morning we met staff, so that the registration and fee payment could be made, before we went back on the Via Egnatia towards the Turkish border.

In the evening, there was time to do some research on Kavala via the Internet. Once again, the quality of the Ipcopter satellite antenna showed itself as fantastic equipment. Although it requires a moment to align and fix, it unerringly finds the right satellite and the Internet connection was quickly established. Best experiences so far in Austria, Serbia and now Greece. We were looking forward to the first satellite connection from Turkey. No annoying, country-dependent dialing by national code. That's just great. But now back to the research.

The trade route Via Egnatia and the settlement of Kavala

As a trading place for goods between Constantinople and Rome, this place on the Via Egnatia in antiquity was of great importance, as we already knew. The remains of the Roman viaduct in the center were also an important indication of the ancient function and significance of the ancient city. We will talk about this in details later. But what was it before?

Kavala is, as clear records say, founded in the 7th century BC by Greek inhabitants of the neighboring island of Thasos as a trading post. Even today Kavala is a commercial and port city of supraregional importance in northern Greece. Here on the Thracian Sea it is the main port of eastern Macedonia, which is still an important source of income for the approximately 70,000 inhabitants. Even a small airport, which is mainly used for domestic flights, is only 30 kilometers away.

Within the period 12 to 11. Century BC Several ethnic groups of very different origins from the Caucasus, Anatolia and the Balkan Peninsula had penetrated into this fertile region. Among them were also many Thracian tribes. In his notes, Herodotus (I to VII) mentions the eastern coastal kikos between the Evros in the east and the Strymon in the west, the sapers in the coastal area of ​​the Peraia, the Dersaier in the Symvolon, the Pierers in the Marmaras valley, the satires in the high mountains of the Pangaion, the Bessians and Odomans, the Edonians west and north of the Pangaion in the valley of the lower Strymon and the Angites, further north the Paioner and Paiopler, and in the upper Strymontal the Brygians. They founded fortified settlements and acropolis, which testifies to possible unrest and armed conflicts with the indigenous people. The Thracian tribes residing in the area of ​​interest of the Thasites were active in trade, in the agriculture and wood industry and in the mining industry. Mines and ore huts may have been operated for several centuries on various ores at various locations by the Thracians and processed and traded the metals obtained. 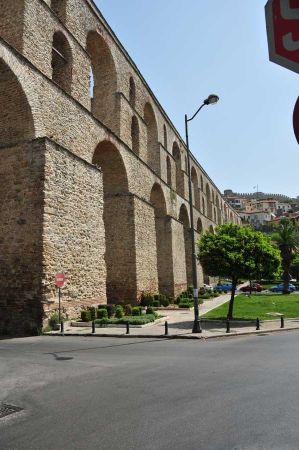 The continental possession of the settlers of Thasos from about the middle of the 7th century to the domination of the Macedonians was referred to as the Thasitic Peraia. Especially the legendary Thracian gold mines in the Pangaion Mountains were the reason for the Greek colonists of the island of Thasos to settle on the opposite mainland between Strymon and Nestos and to bring the rich southern Rhodope under their control.
However, Thasos retained its mainland holdings even in times of Macedonian and Roman rule, but sometimes in altered, usually narrower borders. However, it still included the precious metal ores particularly rich part. From the Roman power, the Thasites had to take over the obligation to preserve the Via Egnatia within the Peraia, after Justitian I had secured the road through fortified sites, such as Topeiros and the castle of Neapolis. In 168 BC Neapolis became a city (civitas).

In 49, Paul went ashore from Tarsus in today's Kavala and founded the first Christian community on European soil in Philippi. In the Byzantine era, Kavala was accordingly renamed in Christopolis.
The Venetians fortified during their brief occupation of the peninsula Panaghia with a castle. The name Kavala should come from the importance as an important post office, at which the horses (Italian "cavallo") on the Via Egnatia were changed. So at least the vernacular says. 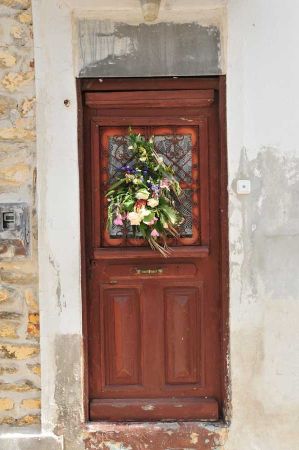 The founder of the Egyptian Khedive dynasty of Albanian origin Muhammad Ali Pasha was born here in 1769. He built the Imaret on the city wall of the peninsula Panaghia in 1817, an ensemble of mosque, Koran school and poor food house overlooking the harbor below. The historic oriental building, with its domed roofs, chimneys, vaults, cisterns and patios, was faithfully restored in 2004 and today represents an architectural landmark that houses a hotel.
Even in 1900 Kavala was a rather insignificant settlement with about 6,000 inhabitants. After the Greek-Turkish war in 1922, Greek settlers from Asia Minor settled in Kavala and established villages in the area where they started to grow tobacco. Through the processing and shipping of the tobacco Kavala gained some importance. Between 1941 and 1944, the headquarters of the Bulgarian Aegean fleet was placed in Kavala.
Nuremberg has been the German twin city of Kavala since 1998