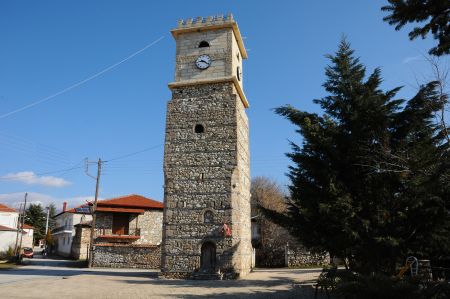 After the round trip of Lake Kerkini we moved on towards Agkistro, leaving for Sidirokastro after a few kilometers on the highway to Bulgaria.

Just before the border and a few hundred meters in front of the toll station, we left the motorway at the Agkistro exit, which is clearly signposted. From here to the village center of Agkistro (about 15 km), it first goes through the village of Promachona, then through hilly landscape and deciduous forests, which already indicates the possibilities on extensive hiking trails or bike tours.

After a short phone call, the agreed meeting point with Anthimos was clear, which together with some colleagues would like to promote the village of Agkistro and also plans to set up a camper stop. In terms of transportation, the future place could become a very interesting destination on the journey to the south or back, especially as the resort already has tourist routes for hiking and cycling. Also the gastronomy is clearly present here, especially a local trout breeding with its own restaurant, in addition the already mentioned ancient Hamam and the sauna facilities as a very attractive destination, which is quite busy used by Greek tourists.

A little later Anthimos gave us some further details about the village of Agkistro, the mountain village on the border with Bulgaria in the Serres region during an extensive exploration tour. The village is part of the municipality of Sintiki and has a population of only 373 inhabitants, so that one really knows each other. The municipality has an area of 70,937 km2. Agkistro is close to the Greek-Bulgarian border and 10 km from the border crossing of Promachonas. The tourist main attraction is actually the steam bath complex with the hamam, which dates back to the Byzantine period.

The gold and silver mines, which are found in Agkistro mountain in the south of the modern village, are said to be used by the armies of the ancient Macedonian and, above all, by the campaign of Alexander the Great in the 4th century BC. In the bibliography on the specific situation, the place was not initially identified as one of the old mining settlements. The steam bath complex and the tower in the village core were built in the Byzantine era, about 950 AD. The latter was later converted into a 20 m high bell tower, possibly during the reign of Emperor Andronikos III. Palaiologos (1328-1341).

During the Ottoman period the village was known as Tsigkeli, while the baths were modified for the local Ottoman gentleman and their harem. In addition, the clock tower was used as a prison and also as a place of executions. In a survey conducted by French professor A. Synvet in 1877, the village accommodated 200 Greeks. While a 1905 survey by the Bulgarian Exarchate General Secretary, which expressed the Bulgarian view, the village was inhabited by 1,536 Bulgarians and had a Bulgarian school, one of the Christian schools in Macedonia, which was also confirmed by a map of the Italian Institute Geografico. When the Balkan War ended in 1913, the Greek-Bulgarian border was drawn a few meters north of the village. In the following years the village was due to the tensions in the Greek-Bulgarian relations to be found within a military zone.

In 1920 there was an increase in population (1,240 in 1928), which came in 1923 from the Pontus region of Turkey as part of the population exchange between Greece and Turkey. To the south of the village lies the Fort Roupel, which was part of the Greek defensive line, which stood against the German invasion in the spring of 1941. A separate article will follow shortly later.