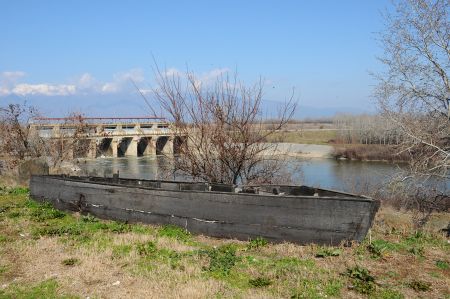 It was originally a suggestion from Toni Zampetas, which finally brought us to George and Anthimos and thus to the village of Agkistro, a small mountain village near the border with Bulgaria in the Serres region.

In Greece, the area is well-known for its hot springs, the ancient hamam and the various saunas and mineral baths. The connection from Sofia to Thessalonica and further to Chalkidiki is a route frequently used by campers, but Agkistro is still quite unknown. In addition to exploring, there were further reasons to follow the invitation to Agkistro.

Some emails and phone calls later, it was time to go. From our stopover at the Zampetas camper stop, we should use the motorway until the exit to Kerkini Lake, which was not entirely unknown to us by birdwatchers and due to personal recommendations as a nature reserve. So we chose the path along the Strymonas river to the village of Lithotopus, then later return to the highway in the direction of Agkistro. In 1932, a dam near Lithotopos was erected, which formed the Strymonas to Kerkini Lake. Further influxes to Kerkini Lake are the Kerkinitis, which winds into the lake in the north-west, and the even a smaller river called Krousias. However, both rivers carry much less water into the lake than the Strymonas, known as the ancient Struma, which flows into the lake in the north-east. Anyone who is interested in antiquity will already be hit by the name of Struma, as several decisive battles have been struck on its shores. But more about that later.

The original purpose of the dam was to regulate the water level of Strymonas to prevent flooding further downstream. In addition to this use, water for irrigation of agricultural areas along the Strymonas plain or the Serres-Sidirokastro plain was increasingly taken over to the later Kerkini Lake during the following years. In 1982, a new, higher dam was constructed as a result of the lower water level due to the strong sediment input of the river Strymonas and the lower capacity of the lake. Lake Kerkini is the third-largest artificial lake in Greece, located just a few kilometers south of Beles mountain (Beles, 2,031 m) with the Greek-Bulgarian border running on it.

In addition to the use as flood protection, the dam serves the lake for watering of agricultural land. Almost aside, Kerkini Lake has developed into an important wetland biotope, which is also considered a bird paradise today. About 300 species of birds have found their habitat in and around Lake Kerkini. In addition to birds and about 30 species of fish, wolves are also found in the sea environment.

Since the 1990s and 2000s the tourist importance of the lake has increased. At the same time, the ecological problems of the lake have increased as a result of water pollution and water abstraction.

The Kerkini Lake stretches along the east flank of Mount Mavrovouni (1,179 m) from northwest to southeast in the western part of the river plain of Strymonas after its passage through the Roupel Pass between Mount Kerkini (Beles) in the west and Mount Orvilos (2,212 M altitude) to the east. The western bank is mountainous and borders directly on the foothills of the Mavrovouni, while the eastern bank runs flat against the river plain of Strymonas and provides settlement for the villages of Sidirokastro, Promachonas and Strymoniko. The north bank is also flat for a short distance to the north and then passes into the foothills of the Kerkini mountain. The transition between the river Strymonas after the passage of the wetlands and the Kerkini Lake is on a line between Mandraki in the north and Limnochori in the south. The northern, eastern and southern shores are characterized by huge wetlands; In particular the transition between the river Strymonas and Lake Kerkini is a large contiguous wetland area, where the bird world has settled a settlement area. Even pelicans have settled here despite the cold in the winter.

We use the ride along the lake for some photos, but unfortunately have forgotten the zoom objective in Thessalonica, so we do not really "approach" the birds in the distance. Too bad, so we can unfortunately only present a few pictures of the for birdwatchers so interesting settlement of the lake with its variety of species.