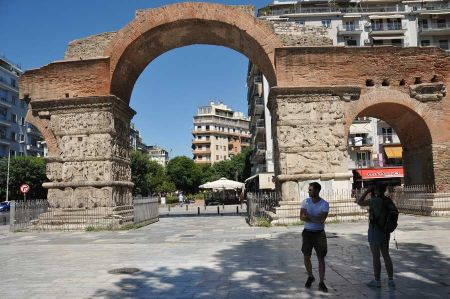 The Roman emperor C. Galerius Valerius Maximianus was born about 250 BC as the son of a peasant family near Sofia (Serdica; Dacia Ripensis).

Early, he joined the military service and by that set the basement of his abilities of fighting and soon got a "name". Emperor Diocletian introduced him into the system of tetrarchy as a Caesar in the Eastern Roman Empire and married him with his daughter Valeria in 293. As in 297 AD the Persians crossed the Tigris, Galerius "jumped" into a battle without prior consent of the emperor Diocletian. This resulted in a defeat of the Romans, but in the following year the Roman army occupied Armenia and within taking the power, Galerius defeated the Persian king Narses. Due to this activity of Galerius, he received the permission for the construction of a triumphal arch in Thessalonica.

Following the resignation of Diocletian, Galerius took over his successor as an Augustus and resided in Thessalonica between 305-311 BC. Immediately after the recent victory, the construction of the famous Rotunda was also started with. Based on the pictures on the relief panels of the triumphal arch, its completion must have been finished before the year 305 AD, cause on the plates Diocletian appears as the highest Augustus, which can be seen as a symbol, that the construction was not built during his reign.

Galerius arch is a Tetrapylon construction whose backbone originally consisted of four pillars. On top of these barrel vaults, the shelter was given by a dome. By the longitudinal side of the sheet the main street, the Via Egnatia, was passing by, which connected Italy with the eastern provinces. On the narrow side of the access of a mosaic hall or a sanctuary joined at its center, the rotunda was placed. Today, only two pillars of the structure of Galerius arch still obtained, the relief decoration is mostly in a very poor condition. The conserved residues measured in the height of 15 meters, width about 30 meters. Such colossal proportions surpass all other triumphal arches from that time. As a building material marble was used, large parts of the bow and the relief ornaments were taken and used as spoils. The Arch of Galerius is the source for the Persian campaign. In a concise form the most important cornerstones of the events in scene stick frames are considered.

The arrangement of the scenes is based on a chronological system. Starting with the lost pillars A ', it continues the cycle clockwise, the images have to be read from top to bottom. Each pillar is dedicated to one main theme: A 'shows the glorification of Tetrarch, B' the Median war, B the Armenian and the Assyrian A. A closer look at the respective arrangement of the frieze two pillars obtained some fundamental similarities between the imagery that can be observed. The relief's of pillars A mainly work in the course of the war, while portrayed on pillar B of victory and triumph of the emperor. This proves that the events on pillar B form the continuation of A.

The representations of the Persian War and the subsequent triumph spread across the insides of the pillars, which its importance was highlighted. On the monument imperial propaganda is sent spreads, the historical chronicle is of secondary importance. This is also reflected in the fact that images that focus on the emperor is, numerically outweigh the battle scenes. Victory and subsequent glorification of the ruler are clearly at the center of the statement that conveys the sheet. Thus, the Galerius arch Thessalonica is regarded as a masterpiece of Roman triumphal arches.

Street restaurants and bars in the Ladadika district

On the way to New Zealand - America later on?