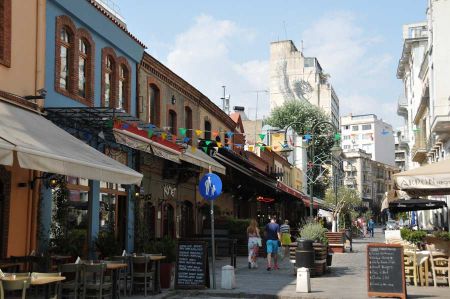 We learned Julia and Davide, a couple from Germany with some family relations to Italy and Spain which wanted to learn same spots in Thessalonica for shopping as well as for sight seeing.

So we together decided going there by ferry again from Perea. This time we were thinking going to Ladadika, a well known historic place of lovely restaurants, bars and cafes, in the night with lot of options for live music, so you are able to spent your time during day as well as during the night.

Ladadika, located near the Port of Thessaloniki, where the ferry boat from Perea is stopping after first stop at the White Tower, which for centuries was one of the most important market places of the city, famous for it was the olive oil production. Its name goes back to the many olive oil shops of the area, too.

Olive oil was common in ancient Greek and Roman cuisine. According to Herodotus, Apollodorus, Plutarch, Pausanias, Ovid and other sources, the city of Athens obtained its name because Athenians considered olive oil essential, preferring the offering of the goddess Athena (an olive tree) over the offering of Poseidon (a spring of salt water gushing out of a cliff). The Spartans and other Greeks used oil to rub themselves while exercising in the gymnasia. 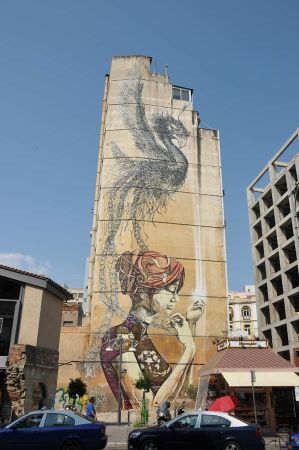 From its beginnings early in the 7th century BC, the cosmetic use of olive oil quickly spread to all of the Hellenic city states, together with athletes training in the nude, and lasted close to a thousand years despite its great expense. Olive trees were planted throughout the entire Mediterranean basin during evolution of the Roman republic and empire. According to the historian Pliny the Elder, Italy had "excellent olive oil at reasonable prices" by the 1st century AD, "the best in the Mediterranean", he maintained. But now turning back to Ladadika.

In the past many Jews of the city were living in Ladadika, while the so-called "Frankish district", with the French / Italian merchants and residents, was located beside. In the years before World War I it came to form the red light district, with the area starting to host many brothels. A brothel is a place where people may come to engage in sexual activity with a prostitute. Technically, any premises where prostitution commonly takes place qualifies as a brothel. However, for legal or cultural reasons, establishments sometimes describe themselves as massage parlors, bars, strip clubs, body rub parlours, studios or by some other description. Sex work in a brothel is considered safer than street prostitution.

In 1985, Ladakika was listed as a heritage site by the Ministry of Culture. Its notable architectural style with 19th century buildings is preserved and protected. Nowadays, having undergone gentrification in the 1980s, Ladadika forms the entertainment district of the city, hosting bars, nightclubs, restaurants and taverna's - in what used to be old oil stores and merchant warehouses, which spill out into a network of pedestrianized streets and small squares.

A beautiful place to spend the day, what we will do again during the night one day.

On the Way to New Zealand - America later on!?

Thessalonica - Citadel and Ramparts of Heptapyrgion