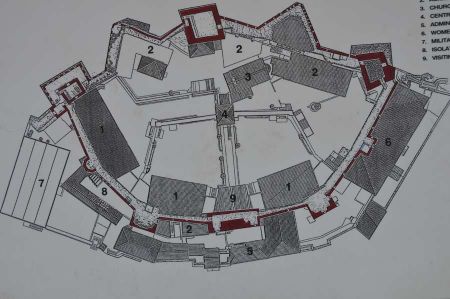 In the morning we had left again to explore Thessalonica, when we first moved from Camper stop Zampetas to the ferry in Perea, then "sail" towards the White Tower.

The ferry is a really interesting option going into the city, especially for campers who do not want to spend lot of time searching for a parking space in downtown and avoid stressful traffic in Thessalonica. After about 1 hour we arrived at the White Tower, then passed the Galerius city gate, the Rotunda and then continuously increased along the fortress walls up to walk to the Citadel.

Thessalonica city walls and the Citadel are in addition to the churches and monasteries the most famous landmarks of the Greek Mediterranean city and are situated in the historical old town Ano Poli, meaning "upper city". The picturesque neighborhood full of winding streets and Ottoman houses, cozy taverns and traditional houses extend above the present center of Thessalonica and invite for long walks in a relaxed atmosphere combined with cozy stops for a frappe drink.

Ano Poli once was the quarter of merchants, Jews and Turks. In the narrow roads, yet covered with original cobblestone and once lining one business to the other, many places were "traditional" craft shops - from the basket maker to the bronze worker and sculptor, it was good that nearly everything was represented. Meanwhile, the bustle of Thessalonica has moved to the new town at the coast, but with Ano Poli town a charming little window survived from the past.

Originally conceived as fortifications for coastal citadel and city walls, Thessalonica city walls today mainly meet as a nostalgic purpose - and are the perfect vantage point over the city. The original eight-kilometer long city walls of Thessalonica was built between the 3rd and the 5th century AD during the Roman and Byzantine period. Originally graced as a wall system to more effectively protection for the city from sea as well as land attacks. Foothills of the wall also extended to the coast, so up to the White Tower. Today about five kilometers of the original building structure can be visited - now homely houses and convivial taverns and cafes are added that invite you to linger in a historic atmosphere cavort along its walls.

The castle, which gave the weir its present nickname "Castra", is one of the most interesting historical buildings of the old quarter, although the rise up in summer temperatures is a bit difficult. Over the centuries the Kastra wore different names: Among the Greeks, it was first called Heptapyrgion, under the Ottomans then called Yedi Kule. Both names mean something like "Seven Towers". In fact, the Citadel today counts ten towers since the Ottomans, after their successful conquest of Thessalonica, conducted extensive renovations to the fortress and so awarded its present appearance.

By the end of the 19th century, the fortress served as a garrison of Ottoman troops; after the liberation of Greece, the castle was, however, then transformed into a political prison that was closed in 1989 and was immortalized in a rather critical way in a variety of Greek folk songs. Even today, the wings of the male and female cells, the political and soldierly prisoners are to be seen, there are barred windows, separated by courtyards steel doors. There are walkways for the guards to monitor the inmates.

After the severe earthquake of 1977 caused considerable damage to the buildings of the fortress, the castle was no longer needed for governmental purposes, until today continuing renovations to the Kastra could be started in 1990. The castle is open to visitors, unfortunately there is no access to the high castle walls. In addition to the historical wall relief's and inscriptions there are only little cultural exhibitions, but the magnificent views of Thessalonica paid all energy back for climbing to the castle - and still force you to a walk through the surrounding, picturesque area. As typical for the region, Balkan and oriental designs have combined here to create a unique mix of styles, the fast should catch the eye not only to lovers of architecture: staggered floors, colored decorations and covered gallery courses are some of the gadgets that the more beautiful the local residents have come up with design of their neighborhood and to take full advantage of the countless hours of sunshine to their particular town.