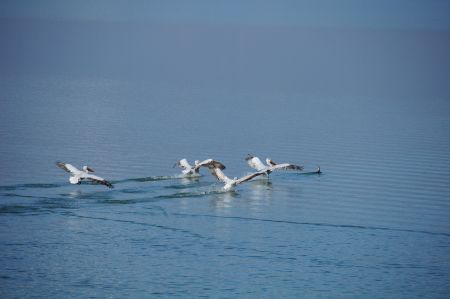 At Lake Vistonida we had already noticed the diversity of present water-birds, what we now deepened during the orbiting of Lake Kerkini. In addition to the large groups of the gray geese, the pelicans, fishing on the lake, were once again attracting us.

Today, no species of pelican is seriously threatened, but the number of pelicans has declined significantly in recent years. As an example the freezyhead-pelican, which was still breeding in the estuaries of the Rhine and the Elbe river in Roman Antiquity, should be mentioned here. In the Danube delta there were around one million couples in the middle of the 19th century; In 1909 this figure had shrunk to 200 and has fallen even further to 100 couple.

In the case of fishermen, pelicans often have a reputation as competitors to considerably reduce their fishing revenues. Although the fish caught by pelicans are often of no economic importance, the assertions are not entirely unfounded: in Greece, cockshell-pelicans yielded about 13 to 18 tons of fish in a breeding season, mostly river eels; this corresponds to about 10% of the amount of eel taken by fishermen. The fish deficiency of some lakes is, however, basically due to over-fishing and the deterioration of water quality. Nevertheless, pelicans are often killed by fishermen. In Turkey, fishermen completely destroyed a pelican squadron in 1983 in a concerted action: the birds were killed, the eggs destroyed, and all the nests burnt down.

In a more sustainable way the coexistence between people and pelicans works, in villages of the Indian state Karnataka. Here the pelicans breed on roofs, comparable to the white stings in Central Europe. The inhabitants also use the excrements as fertilizers and sell surplus quantities to neighboring villages. The pelicans are therefore not only tolerated, but also protected.

The main reason for the decline in stocks is the above-mentioned local fishermen's actions, the draining or poisoning of waterways and over-fishing of the foodstuffs. Two species are currently endangered as the IUCN announced: the freezyhead-pelican and the grey-pelican. The rose´s pelican is locally threatened in Europe as well as the freezyhead-pelican locally, but globally because of the stocks in Africa is not threatened.

As a symbol of Jesus Christ, pelicans are often part of Christian iconography. After the physiology, an early Christian animal compendium, the pelican opens its own breast with its beak, lets its blood drip onto its dead boys and brings it back to life. This became allegorical in relation to the sacrificial death of Jesus Christ, whereby the Pelican became a motif often used in Christian iconography. As a symbol of Christ and the Eucharist, it is also often found on Vasa sacra as the cup, the ciborium, on altars and tabernacles.

The basis for this idea may be the fact that the youngsters of the pelican get their food deep from their parents' throat, which gives the impression that they feed on their breast meat. In addition, during the breeding season, the larynx becomes red in color and reminds of a bloody wound.

In winter, some species endure extreme cold, but need ice-free waters for fishing. Most species of pelicans prefer fresh water. Since they need large quantities of fish as food, they are found on large lakes or in river deltas, and since they do not dive deeply, a low water depth is a prerequisite. The most striking feature of the pelicans is the 25 to 47 cm long beak. The throat-bag, which is present in nearly all the oar-feet, is greatly enlarged and connected with the under-eye, from which it is suspended as an extraordinarily stretchy skin-bag. This throat bag, which can be up to 13 liters in the largest species, is used as fishing net for fishing; It is tightly closed by the long, slightly downward bend.

The wetlands at Lake Kerkini in the region of Serres