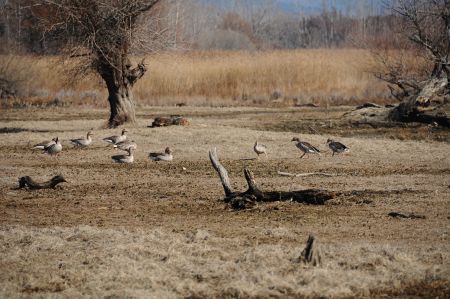 The first impressions at Kerkini Lake were so impressive that we decided to completely surround the lake, especially as the huge wetlands are more on the north-western bank areas in front of the imposing mountain chain that forms the border with Bulgaria.

The areas of the river inlets, in particular the Strymonas river, are surrounded by large reed areas that reach far into the sea surface. In the middle of the town of Mandraki, a small road, well signposted, leads to a small concrete path which leads into the wetlands and can be used as a viewing platform into the wetland area.

At the moment, the lake shows a very low water level, which is why the water birds are far out on the lake. At first almost unnoticed, we then discovered a group of geese that grazed in the marshes. The low water level is also a big problem for the fishermen, because they must go far out into the sea area to get to their boats. In some pictures clearly to see how far back the water has gone.

Worldwide, wetlands are of great ecological importance as they serve as a resting and wintering place for waterfowl. Wetlands roughly cover six percent of the Earth's surface and produce 24 percent of net primary production - they are highly productive ecosystems. They are also used as a groundwater filter and as flood protection. Wetlands of international importance (for example for bird protection) are therefore protected under the Ramsar Convention.

The definition in the Ramsar Convention is as follows: "Wetlands within the meaning of this international agreement are wetlands, marshes and wetlands or waters which are natural or artificial, permanent or temporary, standing or flowing, sweet, brackish or salt water, including such marine areas which do not exceed a depth of six meters at low tide. "

Wetlands are of particular importance for climate protection, since they act as carbon sinks and store large quantities of carbon all over the world. They can thus contribute significantly to the reduction of the greenhouse effect. Since many wetland areas are simultaneously net issuers of the strong greenhouse gas methane, their actual contribution depends on the individual case and is difficult to determine in some cases. When moors are dehydrated, they emit parts of the stored carbon in the form of carbon dioxide and nitrous oxide, which additionally strengthens the greenhouse effect.

A further meaning of the wetlands lies in their function as water storage. Moors and marshes can absorb large amounts of water and release them slowly and in time. They help to reduce the risk of floods in the surrounding areas. On the other hand, they can support the low-water drainage and thus prevent drying out. Wetlands also serve as sinks for pollutants and nutrient inputs and can thus relieve exposed areas and water bodies. Through the nutrient-sink function, many wetlands are exceptionally productive.

The protection and preservation of these areas is therefore of immense importance and should not lie solely in the interests of the water-birds, but of humanity itself, which is understandably difficult for some fishermen because they see strong competition in the water-world. During our journey around the lake, we see numerous observation towers that are accessible to everyone. We were then lucky enough to meet a large group of pelicans hiding in a bay. But more about that later.