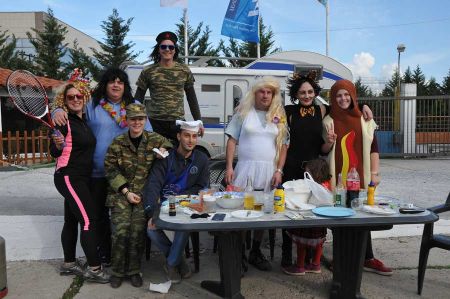 Carnival and Lent - at first glance, one wonders how these two yet so fundamentally different events can actually fit together.

There are, considered historically, very close links that are almost identical yet even in the various world religions, but these are handled differently in its observations and activities in the modern cultures of the Western world.

We had arrived at Zampetas Peraia / Thessalonica to continue with our project and over there met with masked people preparing a small, family Tsiknopempti party, which is held on the so-called Barbecue Thursdays during the Greek Carnival Apokries about three weeks each year before beginning of Lent. Few of the main carnival centers of Greece are starting their festivals earlier already. So Patras is celebrating earlier, which is the most well known city with the most important major events in the country for Carnival, its has already been done in mid-January. In rural areas and on some islands thanks to ancient customs and costumes the tradition is growing too, for example, on the North Sporades islands of Skyros and Skopelos. But in some other cities there is carnival atmosphere during the last days before the beginning of Lent. So for example, Athens and Thessalonica offer a cheerful program to its citizens every year.

The end of Apokries-time and the beginning of Lent is marked by a national holiday, the so-called "Clean Monday" (Kathara Deftera), comparable with the German Carnival Monday. For Lent and thus the carnival set up in Greece after the date of Easter, which is, however, determined according to the ancient Julian calendar. The period of carnival is organized in three weeks, which should agree on the actual Lent, what is celebrated but omitted in Greece: Profoni, Kreatini and Tirofagou.
Profoni is the announcement week, announce the festivities in the traditional drum roll or town crier.

In the Kreatini (Fish Week) which is second week, the carnival takes its peak. It is the last week before Easter, in accordance with strict Greek Orthodox fasting rules meat may be eaten. This is especially this Thursday, the Tsiknopempti (named as well smelling Thursday or free stock Grill Thursday) celebrated with barbecues all over. So this day is the one among the carnival days, the importance of which most coincides with the traditions in western countries like Germany, France, Italy and Spain.

At Zampetas at said Thursday, a barbecue, table and chairs had consequently been constructed in front of the premises, around which the disguised employees and their family members had gathered. We were guests at the property, indeed, rapidly integrated without masking in the celebrations. In addition to delicious grilled meat and sausages were delicious salads and matching wine.

In Germany the day is known as Weiberfastnacht, as well as Schmotziger (fat from allemannischen Schmotz = lard). Thursday is known as fat Thursday (mardi gras) in France.

The third and last week's is called Tyrofagou (Cheese Week). Because it is now to be already lived meatless, while cheese, dairy products and eggs are still allowed, which is, as such, then finally should also renounce during Lent.

Tsiknopempti - also a way to communicate to employees in a familiar context feeling that certainly it has a strong positive effect on cooperation at work.

Campers at Spa Pozar Loutraki Aridea next to Loutraki