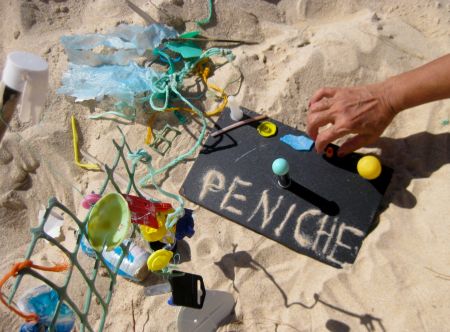 Bom dia! - Thus, the first contact with Andrea & John started, who were directly parking their camper next to us as guests on the pitch of Zampetas Camper Accessories in Thessaloniki / Perea.

Bom dia - if submitted our language skills, however, neither origins from the Belgian-Flemish-French due to their car number plate, nor from the Greek dialect, so of course, a demand for the country of origin to Andrea was obvious - Brazil as country and Portuguese as language, of course, was the answer!

No question, this information alone caused further inquiries and quickly we were in a deep conversation with Andrea and John, who told us about their lives in Brazil, about their activities there and their current project work, which sounded so exciting, that we first opened table, chairs and prepared a cup of coffee, and then continued the conversation. Big problems there are in Brazil in terms of environmental protection, stop pollution of the environment especially the rivers and waters, so Andrea and John took care of in a very special way. John, in his job as a documentary and film director, takes care of better living conditions for the local population together with Andrea, even puts hand on, if there is waste in the way, which they always pick up and dispose it properly, as we should realize in the following joint ventures.

No wonder, that they have created, above all, some events on collecting rubbish in their own communities which ultimately contributes to the improvement of living conditions, whether the removal of household goods and waste in their surrounding district or cleaning the river bank and the river water itself. Great events like the World Cup in football last year had indeed brought many visitors to the country, but little change in the quality for life of the local population. Of course, we know the one or other contribution from our western media about World Cup and environmental protection in Brazil, in short, a report on the situation of people who live in the environment and are thus directly affected, surely is something really different.

So, because of surprisingly listening to that, we were also surprised how little different social classes actually are happy and satisfied with the hosting of the Olympic Games, a little later this year, nearly nobody really agrees what creates a great aversion to the games that a huge police force is necessary, to stop these protests so that it hardly seems just a even in the media. Which brings us straight to very digress into politics, what we do not really want. In this environment, Andrea and John try to do something for the environment, locally bind the population and are well networked in between.

What at first appeared only as a first idea, Andrea and John could then actually implement into practice, because the idea occurred, probably inspired by 2016 Olympic Games in Brazil, to bring pure water from Mount Olympus to their home town river it to mix with the clean water from Mount Olympus, which surely makes the river water more clean, sure just as symbolic activity to stop to pollute the water of the local river! Symbolically considered completely correct, although physically not really effective. Both, Andrea and John, are public figures who can direct it that they are observed in their actions. These actions are shared, so certainly this makes the difference. Especially as the two also operate puns, because of the term Olimpo 2016 Rio can also be O Limpo meaning "clean / derived pure. So, no wonder the slogan is printed on white fabric. Andrea heavily deals with the subject, also uses Origami, so that she has created characters that they linked to a story, to point to the urgency of the issue.

Wherever they go, they meet listeners in their project, no question. But they also put the project idea all around. So their view always wanders to dirt and waste, which are then picked up and disposed of. What will hopefully be taken forward by all the readers in a similar manner.

Caravans and Motorhomes - more diversity then ever

On the way to Tierra del Fuego - stopover at Lake Ohrid