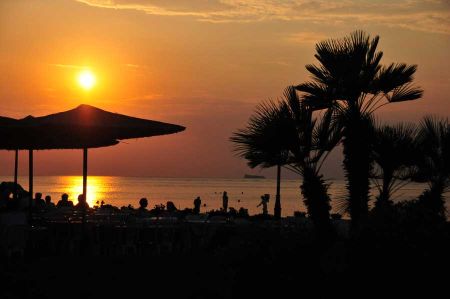 Several times, when leaving Camperstop Zampetas for Perea, we had been walking along the waterfront in Perea, again and again we were surprised by the play of colors during the sunset.

Depending on the local weather conditions, the sinking of the sun can be associated with an impressive play of colors that sometimes not only shines in the evening glow, but also has yellow, violet or even green hues. The color changes are caused by the Rayleigh scattering. The earth's atmosphere, with its floating particles, the aerosols, acts as a diffusely scattering medium in the peplosphere.

People have always been fascinated by the sunset or by the sunrise, so there were always interesting interpretations, especially since people were convinced that the earth is the center of all existence in ancient times, all other celestial bodies therefore turn around the earth, this is called geocentric worldview.

The geocentric view of the world dominates antiquity The geocentric view of the world is based on the assumption that the earth and thus also man in the universe occupy a central position, so that all celestial bodies (moon, sun, the other planets and the fixed stars) orbit the earth. The geocentric view of the world corresponds to the immediate appearance and was already elaborated in classical antiquity in Greece, especially and in detail by Aristotle (384-322 BC). It was then in Europe for about 1800 years the prevailing view.

Even in ancient China and the Islamic world, a geocentric view of the world was taught. Whether it was represented before the Greeks in ancient Mesopotamia is not certain. In the Renaissance, the geocentric was replaced by the heliocentric view of the world with the sun as the center of the cosmos, which appeared in its first form in Aristarchus of Samos (310-230 BC), thus also in antiquity and parallel, but could not really enforce.

In the homocentric system of the Eudoxus of Knidos (about 390-338 BC), this curve movement takes place on circular paths whose axes pass through the center of the earth and thus appear to be perfect orbits.

Apollonius of Perge and Hipparchus Apollonius of Perge (262-190 BC) and Hipparchus (about 190-120 BC) adapted the planetary movements with the help of eccentrics and epicyclics in their models, better their observation data. Heraclides Pontikos (about 390-322 BC) is credited with a system in which the planets Mercury and Venus revolve around the sun, which in turn, like the moon and the fixed star sphere, revolves around the earth in its central position. This represents a compromise between the geocentric and the heliocentric world system. In recent research, however, it is highly controversial whether Heraclides actually taught this world system.

An important reason for the geocentric view of the world lay in the observation that the earth is perceived as at rest and is orbited by the heavenly bodies. Furthermore, gravity could easily be explained by the fact that all gravity moved to its natural place, which could only be the center of the world. Aristotle was also an influential advocate of the geocentric worldview. Aristotelian physics, strictly speaking, does not agree with the auxiliary assumptions of eccentrics, epicycles, and equations. It harmonizes best with the homocentric variant. Part of the sun and the planets were believed to consist of a supernatural "fifth element," the quintessence whose natural motion was the orbit.

We have 801 guests and no members online