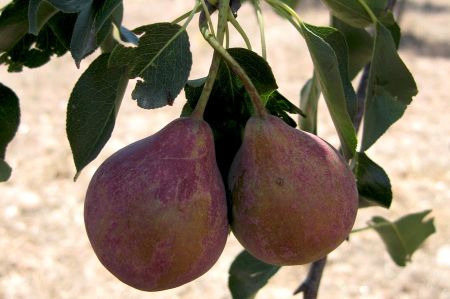 Central Asia, original homeland of the Turkish people, has a very long history of fruit cultivation. According to Chinese records the Eastern Gokturks of Turkistan were exporting fruit to China 1300 years ago, notably the Mare's Nipple grape, which was transported fresh from the Turfan oasis across the fringes of the Gobi Desert, a distance of more than 2000 kilometers.

This elongated purple grape became so famous in China, that it was mentioned in a poem by Liu Yu-hsi. Turfan is still famous for its grapes, apricots and melons today and the source of most of China's dried fruits.
Transporting fresh fruit across huge distances by camel caravans during the extreme heat of the Central Asian summer was an extraordinary feat, but this was surpassed in the ninth century, when the Turkic state of Khwarazm in Iran exported watermelons to China, carrying them packed in snow in lead containers over a distance of 4000 kilometers. From the memoirs of Babur Shah, the Moghul ruler of Chaghatay Turkic lineage, we learn that Central Asia was renowned for the cultivation of pomegranates, figs, grapes, peaches, apricots, plums, apples and mulberries.

The Seljuk and Oğuz Turks who moved westwards into Asia Minor (Anatolia) brought their tradition of fruit cultivation into a region that was an important centre of biodiversity, and as a cradle of civilisation had its own long tradition of fruit growing. Among the earliest records of Turkey's wide range of cultivated fruit varieties is the travel account of the Moroccan Ibn Battuta in the 14th century, who described the famous Kamereddin apricot of Alanya, which was dried and exported to Egypt, and the large, thin-skinned sweet Maiden grape of Iznik, "the like of which I have never seen elsewhere, of the utmost sweetness, large in size, clear in colour, and thin-skinned, with only one stone to each grape".

The Ankara and Kasaba melons, the yellow cherry of Sapanca, the 'Turkish orange' and the 'Smyrna quince', which latter was introduced to the United States from Izmir (Smyrna) in 1897, are some of the other fruit varieties originating in Turkey.

Ottoman period documents, including statutes, court records and travel accounts, record the names of many famous and commercial fruit varieties. For example, a statute drawn up in Bursa in 1502 includes a list of retail prices for foodstuffs, among which are around forty fruit varieties. 500 years on some of these varieties are still being cultivated, such as the Seker pear, the Bozdoğan pear, the sour apple, the Musk apple, the Ankara melon, the Birgi pomegranate and Beylerce grape, but unfortunately most of these no longer to be found in greengrocers or markets.

The prominent part played by fresh fruit in the Ottoman diet meant that horticultural skills were advanced, and grafters were a a separate professional group distinct from gardeners. In 17th century Istanbul more than 50,000 professional gardeners and 500 grafters were employed in the city's gardens, orchards and vineyards.
Books on fruit growing written up to 1950 record hundreds of fruit varieties of commercial importance grown in different regions of Turkey. The value of traditional agricultural knowledge and practices was also acknowledged (Tosun and Christiansen-Weniger 1939:7):

“The experience and knowledge of Turkish peasants must not be neglected in the process of agricultural development. On the contrary, these should be be carefully compiled and studied, and what the peasants have to teach us should be given a foremost place in establishing the principles of development."

“Olives from your grandfather, figs from your father, but plant your own orchard.” Turkish proverb.