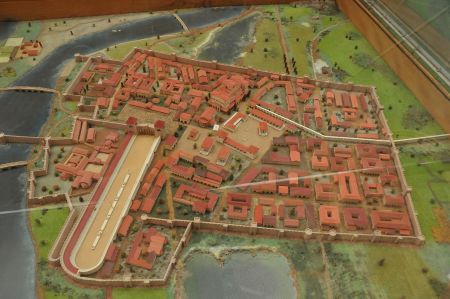 Our route to the north should this time lead us passing Skopje, Nis and Belgrade along the main route E 75 or A1 / E 70 through the Balkans into the Serbian Vojvodina, next to previously little known Campsite Zasavica next to the city Sremska Mitrovica, once a Roman imperial palace with fortress which was called Sirmium.

We had the advice of the owner of Auto Camping Enigma Station 37 and had already seen first signs of the Camping Zasavica Station 39 along the highway after Belgrade, after all, still about 60 kilometers to go. Of course we were curious about what to expect. We missed a turn when approaching, so that initially the approach appeared somewhat complicated. After consultation with the place owner, Mr. Jovan Vukadinovic, we discovered detour quickly became clear. Very surprised we were about the quality of the camp, which we had not been experienced in this form in Serbia and probably fills position one in the country. But more on that later.

Shortly after our arrival, we were also able to meet Jovan, who told us first details of surrounding places that should lead to further surprises. So there is, in the immediate vicinity of the square, a huge nature reserve of the same name, which is created and managed at the initiative of local citizens. The nature park can visited by Camping travelers who like to travel the reserve with a ship, with small boats, in guided hiking tours or individually. It was a fascinating encounter with many happy memories that will occupy us further. But now first back to the city Sremska Mitrovica, better Sirmium because we were interested in the Roman cultural history at first due to our project.

At various locations in the city area you come across remnants and excavated architectural remains of the once important city Sirmium, capital of the Roman province of Pannonia inferior, later Pannonia Secunda, the center of Illyricum Prefecture and seat of the Bishops of Sirmium. Sirmium was initially a Celtic, and later an Illyrian settlement. It was conquered by the Romans after the Pannonian revolt in year 14 AD and then became part of the province of Pannonia. Under the Flavians Sirmium received the status of a colonia, thus the name Colonia Flavia Sirmium origins from.

After the division of the province of Pannonia under Trajan,  Sirmium became the capital of the eastern part of Pannonia inferior from  Emperor Marcus Aurelius in 103 AD, who even moved here with his headquarters during the Marcomanni wars.

296 it became the capital of the newly created province of Pannonia Secunda. During the reign of Emperor Diocletian, Galerius, Licinius and Constantine, Sirmium it was imperial residence and was regarded as one of the four capitals of the Roman Empire.
Since 304 bishops from Sirmium are known. In the Imperial Palace the four synods of Sirmium (351-359) took place.

In 1960, a Yugoslav-French team of archaeologists led by Noël Duval, Đurđe Bošković and Vladislav Popović began to explore the material evidence of the Roman era and to secure the excavated remains of the Roman buildings. In the series Sirmium Archaeological Investigations in Syrmian Pannonia, the research results from the Archaeological Institute in Belgrade and from the École Française in Rome were published. As a result of the disintegration of SFRY 1991/1992, excavations were discontinued until further notice, so unfortunately more remains of the ancient ruins are not in particularly good condition. By no means the people and leaders of the city do not have recognized, about what splendid and tourists attractive jewel they have in principle.

Ten Roman emperors were born in the city of Sirmium and around:

The last emperor of a united empire, Theodosius I (378-95), was crowned in Sirmium. The Roman usurpers Ingenuus and Regalianus were declared (in 260) to emperors in the city and many other Roman rulers spent some time in Sirmium including Marcus Aurelius.

Excavations at the Imperial Palace

We came across the ruins of the fortification with remains of towers that can still be recognized for the importance the city once had. Of particular importance here are the excavations of the Imperial Palace, which is fortunately well protected by a magnificent, modern hall building in glulam construction. Amazingly well-preserved tile reliefs indicate the former importance of the town. Large parts of the Imperial Palace also allow insight into the workings of the ancient ruins, the Hypokaustensystem, the underfloor heating, is very well recognizable, supply lines for water are clearly understandable. Just the Imperial Palace Sirmium is worth the journey. Please, stay interested.