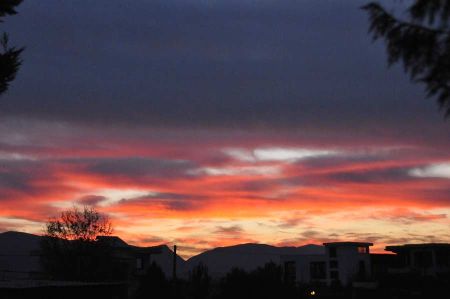 Already at the beginning of our search for a secure and easy going camper route to the south, which is intended to show all-seasons camping sites or camper stops along Croatia, Montenegro, Albania and Greece along the coast, we had found Hotel Baron in Tirana as a way to explore the capital Albania during a short stay before the traveler continues the way to the South (even for long term stay).

The subject of "wintering on the Peloponnesus, on Crete, on Cyprus and in Turkey" was an incentive for the development of a safe route down the Balkans, which should enable any length extended stopovers in the regions.

After initial discussions last year, now another meeting in Tirana should be held, where initial offers for the travelers already should be discussed and published. Officially the camper stop at Hotel Baron is officially introduced in publications of the ADAC, the trip advisers, etc., so that at this point does it does not need to be discussed further, the hotel and the parking is located next to the building. For more information about the Hotel Baron click here: Camper stop at Hotel Baron.

From Elbasan coming, we went along the at least finished part of motorway E 852, following right behind the roundabout after leaving the town towards Tirana. The end of the final part forms the tunnel at the time, which forces the drivers turning back to the old and winding country road SH. 3. Those who enjoy a bit of adventure and great views, should not select the highway toward Tirana, but the old pass road crossing Bradashesh and Gracen. It takes a little longer, but is an experience with great views of the mountains because the mountain pass road often follows directly the ridgeline.

After about 60 kilometres from Elbasan, you will reach the large roundabout of already completed ring highway of Tirana. Who wants to go to Hotel Baron, should here take the second exit, currently still unattached lists as Rruga e Elbasanit and looking like construction road (not the exit to the mall). After about 300 meters you are already back on the paved road and reach the Camper-Stop Hotel Baron left side of the road a few kilometers further. Unfortunately, the weather in Tirana was not very much inviting, so we only were able to discuss concepts and offer in the episode, less even been able to visit destinations of local possibilities (with the exception of the city of Kruja, report follows). However, we met two campers guests who wanted to explore Tirana from here and around. Here are some first informations about the city:

Tirana today is the cultural center of Albania, because there are the country's most important cultural institutions in the capital and there the majority of the Albanian artists, athletes, musicians, actors and singers do their jobs. However, this was not always like that in Albania. Before Tirana, in 1920, was named the capital of Albania, the cities of Shkodra, Korça, Prizren (now in Kosovo) and Skopje (now in Macedonia) were known as cultural centers of Albania and the Albanians. Just with the emergence of the centralized state structure of Albania in the former small market town Tirana big city buildings and thus also cultural assets were emerged.

These centralist policies, but also by the rural exodus and the associated migration from other parts of Albania, the local culture occurred gradually into the background during the last 20 years.
On February 20, 1991 the demonstrators rushed than-life statue of Enver Hoxha on the Skanderbeg Square. Thus, the end of communist rule was introduced. Albania began politically and socially open and democratize. In March 1997, Albania was again shaken by riots. Foreigners had to be flown out, such as in the operation Dragonfly by the German Bundeswehr.

After democratization, the cityscape changed rapidly. Everywhere buildings had been illegally constructed, especially in the northwest. Many residents of country regions settled in the suburbs. Downtown shops, cafes and restaurants emerged. From 1999, the illegal buildings were demolished in the city center and the greenery restored.

In the beginning of 21st century Tirana experienced an unprecedented economic boom. Many modern high-rise buildings have emerged. Most of the roads were resurfaced and labeled. Many trees have been planted and parks created. An urban and development plan was completed. A sewerage project is being implemented by a Japanese company, and large parts of the town were cleaned. International companies and shops opened their branches. Public transport was partially expanded and new city buses have been acquired. A tram project is still under consideration. In addition, an address system was implemented.

The facades of entire streets in downtown were redesigned in bright colors and patterns wild a few years ago. These "time-actions" of the mayor and artist Edi Rama was the communist drabness that clung to many plate and many unplastered houses, mitigated. Other cities in Albania took over this idea from Tirana.

Since these first transformations in the early 21st century, the cityscape has changed still strong. There have arisen modern buildings, new avenues, schools, roads, bike paths, parks and a new sewage system, and the supply of electricity and water has improved.

Although the evening sky over Tirana had then promised improvement, we already had determined to revisit Tirana in October to present then photographic arguments for visiting the city of Tirana, because unfortunately it rained the next morning again in streams. So stay tuned.