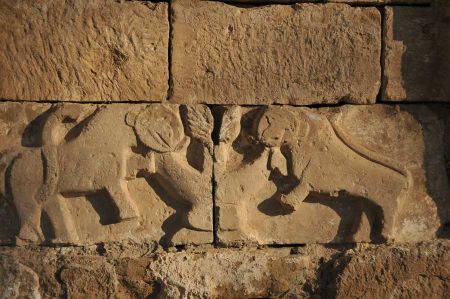 After our visit to Durres we were driven to mountain town Kruja by passing Tirana where today a living museum reminds Albanian freedom fighter Skanderbeg and which increasingly ensures tourist interest from abroad.

In early Middle Ages, between the 6th and 9th centuries, Kruja was developing from a medium-sized castle settlement to an urban center, long before the development of Tirana even started. Artifacts from this period that have been found in tombs, testify to the erstwhile importance of the city and the wealth that was found in the tombs of the interred showed the high social status. In the 9th century the city was the seat of a bishop named David who is documented as a participant in the Fourth Council of Constantinople.

We go, always following the serpentines, up to the castle. The road is partially a little tighty, so some coaches up to torment fortress often blocking their way themselves with oncoming buses. Local community already spends some effort to keep the buses away from the center by the help of minibuses being used as a shuttle.

In the year 1190 the Principality Progon Arbanon founded the castle Kruje as center of power. It was the first principality ruled by Albanian nobles. 1415 Kruja was conquered by Sultan Mehmed I. who guided Ottoman troops. In the mid-15th century Skanderbeg with his League of Lezha conquered back the city and defended Albania from the fortress for several decades against the ongoing invasion by the Ottomans, who attacked the castle repeatedly, for example during the month-long but unsuccessful first siege in 1450. After the death of Skanderbeg, the Turks could manage to conquer Kruja in 1478 and all Albania was fully occupied and then mastered for more than 400 years.

Just below the fortress there are several parking options for cars, of which one we have choosen. Low parking fee, as almost everywhere in Albania. Very courteous parking attendant, which also helped during parking maneuvers. After parking we then went up to the second courtyard of the fortress of Kruja, which today is a historic shrine for the Albanian nation.

The Skanderbeg Museum inside the fortress wall was being built that the fight of the Albanians under Skanderbeg and his League of Lezha will be remembered and kept in the mind of people, it was designed by the architect Pranvera Hoxha, the daughter of Enver Hoxha and as a design given the appearance of a medieval fortress. Inside the fortress walls there is the small Bektashi Teqe of Dollme, an Ethnographic Museum and a Turkish bath. In the lower part of the fortress there are numerous small houses, where families still live in. At the foot of the hill you will find a restored bazaar street whose buildings date from the 19th century and reflects the typical architecture of the mountain area.

For lingering tourists visiting the sights, there are some hotels, cafes, bars and numerous souvenir stalls as you otherwise can hardly find in Albania. Most visitors come from Tirana or Durres for a few hours or make short stop in transit. Recently, city tours are offered.

From our companions we learned even more details about Kruja during the visit, so lying on the mountain above the town, there is of one of the alleged tombs Sari Saltiks, a saint of the Bektashi Order, hidden in a cave. Kruja was a center of Bektashism. On a mountain range to the east is the National Park Qafë Shtama. At the foot of the mountain close to Fushe-Kruje are the ruins of the Illyrian place Zgerdhesh.

In Laç you will find an old pilgrim places: The monastery is situated above the town in the mountains, which is dedicated to Saint Anthony of Padua, it is visited by people of different religions. Since the end of the prescribed religions by the Communists ban, many Catholics gather at the monastery on June 12 each year.

In the Ores Canyon Gryka e Skronës south of Tirana is a large cave that was inhabited in the Paleolithic age already. On Dajti plain finds also indicate habitation in the Palaeolithic and the Iron Age, which is drained by the river Ishëm to the Adriatic Sea.

The town Kruja itself as well as its surroundings had let grow our interest in Albania rapidly, especially when watching the nearby mountain ranges and thinking of hiking in the almost untouched nature of Albania. All encounters with locals so far went with the utmost respect and consideration, far from the prejudices that commonly occur so repeatedly when talking about Albania.