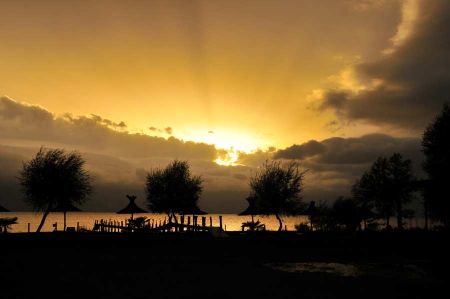 Unlike the tectonic scale and geologically ancient Lake Ohrid, Lake Skadar in Albania, at least is geologically very young. Its present form as a flat but geographically large lake, has set more or less in the last 18,000 years.

During the ice age all the surrounding mountains were partially heavily glaciated, so the lake was highly dependent on the drains of the former river systems during the ice ages. Even today the tributaries of Dinaric high mountain feed the Skadar Lake.

On our way south we had to leave Omis a day earlier, were then we passed over Dubrovnik and Podgorica in Montenegro to Albania. Unfortunately, a truck was overturned on the narrow road behind Podgorica shortly before the border with Albania, which closed the road for hours. Thus, our arrival at the lake was delayed to the early evening, without moonlight due to heavy clouds it was very dark. During the night it started to rain, which the entire following day should continue like that. Time to do research and update the e-mail traffic. Stop ..... it was already almost evening when then, even when interrupted just a few minutes, the sun came through and some wonderful shots of Lake Skadar and the mountain ranges permitted in the background were possible.

The Skadar Lake, also called Shkodra Lake, is the largest lake in the Balkans. As used herein, the lake, after the previously used Italian name, is located on the southeast tip of the lake in the Albanian city of Shkodra. The lake is on the border between Montenegro and Albania, which owns about one-third of the total area of the lake. To the southwest it is separated by the up to 1,600 meters high mountain Rumija and just 20 kilometers away Adria while followed by a far-stretched, partially swampy lowlands on the northeast side.

The Skadar Lake is 48 kilometers long and up to 14 kilometers wide. It is located in a tectonically incurred Polje and is in average about 368 square kilometers big. The water level of the lake varies greatly, depending on the season up to 5 meters. This also leads to a strong fluctuation of the surface between 370 km² in the summer and 540 km² at high water after the snow has been melted. The average height above sea level is 7 meters. The water depth is often only 5 to 9 meters. Some underground springs, also called eyes, from which the lake is fed, among other things, are up to 44 meters deep. The water supply through the karst landscape is extremely complex. Even the underground springs are part of the water system, as some rivers like the Cijevna partially disappear underground.

The main tributary is the Morača on Montenegrin side, which feeds the lake to 60 percent. The outflow to the Adriatic Sea forms the Buna, which marks the border between Albania and Montenegro, almost along its entire length. Along the southwestern, Montenegrin banks are some small islands as Beska, Moračnik, Starčevo or Grmožur on which several small churches and ruins are located. It is located approximately in the middle of the West shore, a narrow arm that extends some 15 kilometers into the country, called in Albania Bay Hoti, is worth visiting.

The lake basin is a sensitive ecosystem that has created more than 20 endemic animal and plant species. Important for Skadar Lake and well known it is as resting and breeding place for migratory birds from northern Europe. They stay for the winter at the lake or use it in the spring on their way as a resting place. The Montenegrin part of lake Skadar was declared as a national park in 1983 and is included in the international Ramsar List of worth protecting wetlands since 1996. In 2005 the Albanian part is provided as a nature reserve under protection as well.

Meeting at Lin at Ohrid Lake